The comedian's pettiness was the worst thing about the telecast. Much better were A Tribe Called Red's show opener and Feist's Leonard Cohen tribute 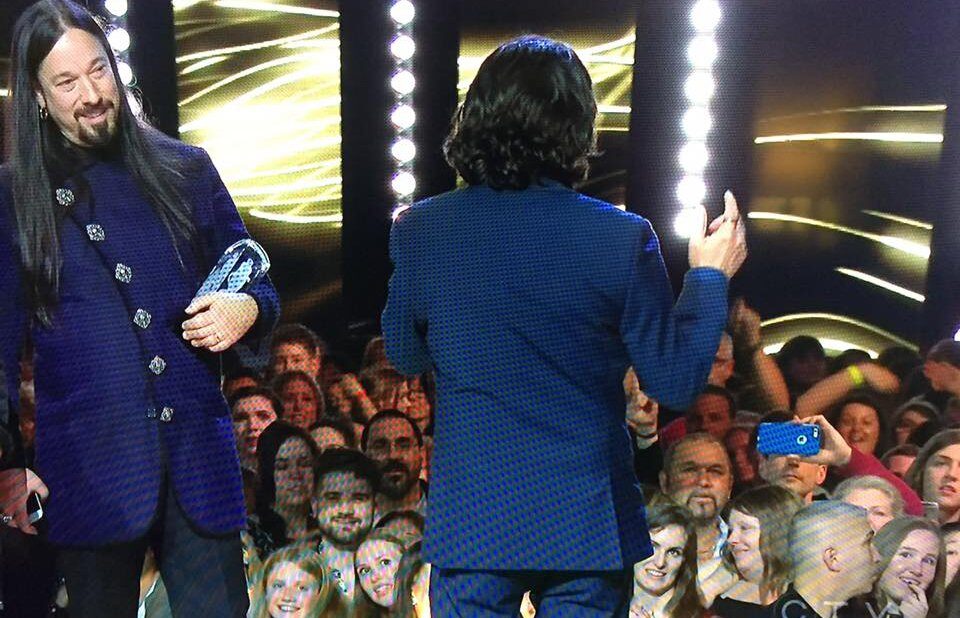 Comedians who are asked to co-host an event with a non-comedian generally come off as annoyed comedians. Paired up with rocker Bryan Adams at the 2017 Juno Awards, Russell Peters seemed intent on making the Canadian music award show awkward and that’s what he did.

Was it the worst thing about the Sunday night telecast? Let’s find out.

Before we find out, let’s say yes. Yes it was.

The opening: A Tribe Called Red

One would be hard-pressed to name a more powerfully compelling and woke music award show opening than the Junos ceding the stage to Buffy Sainte-Marie, A Tribe Called Red, and Tanya Tagaq. In an opening ceremony, Sainte-Marie reminded viewers that Ottawa was unsurrendered territory belonging to the Alognquin Anishinaabe nation, Tribe’s music blared, including the song Sila featuring the always captivating Tanya Tagaq. It was note perfect. Nothing could ruin it.

Russell Peters tried to ruin it. After making an untoward joke about how many young girls were in the audience, Peters said, “I don’t know what that [performance was], I dug it, but it scared me at the same time.” This bit of racism really, really sucked and it undermined the production team’s foresight to open the show in such a bold manner.

Throughout the night, Peters went off-script with several unfunny asides. He was petty and pissy, even calling out Juno execs by name for not inviting him to a past Toronto ceremony.

In a one-sided exchange with attendee Prime Minister Justin Trudeau, Peters landed a body blow on one of host network CTV’s signature stars, Ben Mulroney. It was actually a funny joke but, again, something about Peters seemed so embittered that even his playful patter with co-host Adams felt tense and pointed. The pairing just didn’t work, in no small part because Peters seemed irritated to share the stage.

Country Album of the Year nominee Dallas Smith performed a form of mainstream alt-rock, but with an occasional and vague twang in his voice. It was about the only signifier of traditional country music. But, in a way, it said a lot about the nebulous state of country and rock music right now.

July Talk used the TV award show medium well. They had theatrical staging and treatied the cameras like playthings. They made use of centre stage and then travelled down every extended runway and, during a lull in the dynamically arranged Picturing Love, turned the stage into a backdrop. Fan or not, things kept changing in a organic enough way that you couldn’t look away.

The Strumbellas’ hard touring has earned them an international following and, over the past year, they’ve blown up. They performed Spirits, a significant hit for them that draws upon some thread of Canadian college folk that connects Spirit of the West with Great Big Sea. Their music is part of a Canadian tradition to tap into a European storytelling tradition, but it’s also its own thing, and the performance was charming and uplifting.

Even though few women were nominated for Junos this year, a few actually won during the telecast, including Alessia Cara, whose Know-It-All earned Pop Album of the Year. For all my cynicism about manufactured mainstream pop artists, this woman from Brampton seems like the real deal. She comes across as grounded, and casually but fully in charge of her huge voice, which she showcased in a pair of cool performances.

In tribute to Leonard Cohen, Feist performed Hey, That’s No Way to Say Goodbye along with her Hydra bandmates Daniel Gesundheit (Snowblink) and Ariel Engle (AroarA, Broken Social Scene) and it was gorgeous. It was all framed artfully with images of Cohen in a slideshow above them, and its moodiness made for uncommon television. It’s good to see and hear Feist again.

Sarah McLachlan was on hand to accept her induction to the Canadian Music Hall of Fame, which served as a reminder of just how huge a star she once was. A pre-recorded tribute to McLachlan aired out of sync the video and audio weren’t lined up, as though the file was either edited at the last minute or not rendered properly. Given it featured tributes from Bill Clinton, Sheryl Crow, Tegan and Sara, James Taylor, and Josh Groban among others, the technical foul-up was a drag. Fortunately, McLachlan was poised, grateful, and humble during her speech, praising Canadian values in a way that felt like a pointed rebuke against U.S. President Donald Trump’s vision of America.

Also speaking up for what Canada should be about, Gord Downie accepted the trophy for Songwriter of the Year for his conceptual record/graphic novel, Secret Path, in a pre-taped speech. It was moving to see the guy, gracious for the honour but reminding all of us that Canada still owes its First Nation people a huge debt. He signed off by identifying himself by his newly given Lakota spirit name, Wicapi Omani, or “Man who walks among the stars.”

In related news, the evening’s most amusing and odd moment arrived after the Tragically Hip won the Group of the Year Award. We talked a lot about the Tragically Hip last year. They made a fantastic record in Man Machine Poem and trekked across most of Canada for what was likely the final time. Guitarist Rob Baker did his best to thank the blue-collar cohort that keep the music industry running. The speech was noble but a tad off-kilter, with Baker citing names few people would appreciate. He also stood facing sideways, as though he were stepping up to bat against a pitcher. Trouble is, he was looking at the dugout. You could see directors struggling with this, trying different angles to capture Baker full frontal but he seemed to be revolving.

Then, fellow guitarist Paul Langlois took the mic and, as he offered words of encouragement to younger non-Juno-nominated bands, producers tried to play him off with electronic music. Langlois acknowledged this move, but then defiantly proceeded to face completely away from the camera. Literally, his back was to the television audience, as he acknowledged his band’s emotional last show in Ottawa back in August and his terminally ill bandmate, Downie. Some director had a notion that the generic play-off music was spoiling the mood and dutifully switched on the Hip’s Ahead By a Century instead. Hilariously, this further set Langlois off.

“Oh, I love this,” he said. “Go to commercial, go to commercial. This is my arena, not yours.” The crowd roared. As Langlois was possibly revealing something about Downie, producers finally cut his mic and wen to commercial. It was an utter fiasco, but amusing television

And that was it, really. There was another group jam this year, with every performer but Shawn Mendes joining forces to sing Adams’ Summer of ’69. It was fine.

But the biggest takeaways were seeing the Canadian music community acknowledging and celebrating Indigenous culture in a truly honourable fashion, and confirmation that Russell Peters does not play well with others and might well hate working with Bryan Adams.