Daniel Tate collects vintage gig posters from the Toronto Archives, the Reference Library, the Toronto Star, the Globe and Mail and NOW Magazine 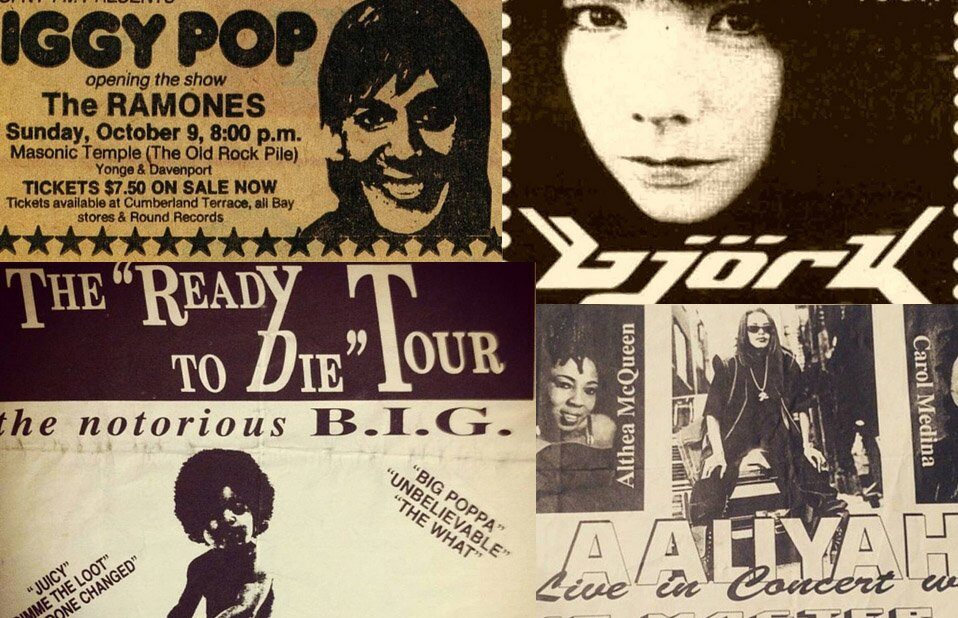 In the days before Facebook, if you wanted to know who was playing in Toronto, you’d read about it in the paper or listen for ads on the radio. If you had an eye to the underground, you’d also watch for flyers.

Handed out on street corners and stuck onto hydro poles, those paper ads once covered the city in wheat paste.

Daniel Tate has been collecting and posting them in The Flyer Vault on Instagram since 2015. Though never meant to last, these physical artifacts tell Toronto’s music and nightlife history, one gig announcement at a time.

“I love to take people down memory lane,” says Tate, the excitable mind behind the project, “but these aren’t just interesting stories they’re a historical record of our city’s music scene.”

Tate had a stack of about 3,000 flyers sitting in his parents’ garage for nearly a decade and a half. He collected them between 1995 and 2005, first as a teenaged raver, then as a party-thrower and finally as a director of promotions for REMG, which was at the time the top hip-hop and R&B promoter in the city.

Vintage electronic and rap flyers make up most of his collection, and he’s eager to talk my ear off about early local gigs for Outkast, Run DMC, A Tribe Called Quest and J Dilla, or how Toronto was introduced to modern-day house music at iconic Richmond West club the Twilight Zone.

Tate’s done the math and knows that at the pace he’s going, it will take him 10 to 15 years to post his whole collection, though the scope of the project extends far beyond that.

In the hours between his day job as a member of AT&T’s IT operations team, he spends his time scouring the Toronto Archives, the Reference Library and the online archives of the Toronto Star, the Globe and Mail and, yeah, NOW Magazine. He also gets a ton of submissions from other nostalgists.

“There’s this big emphasis on Toronto as a music city now, but I’m more interested in ‘How did we get here?’ Well, man, it didn’t just happen overnight. That shit started in the 1880s.”

A potent combo of music nerd and history geek, Tate can pinpoint the glory days of punk, classical, breakdancing, reggae, disco, circus, jazz and wrestling. He can tell you when Kardinal Offishall played his first show or what opened the floodgates for rock and roll in the city (Bill Haley & the Comets, years before Elvis, Little Richard and Chuck Berry).

“You find enough flyers and all the dots start to connect.”

With all the closing venues, he wonders where certain artists will be able to play to the right size crowd when seasonal venues like Echo Beach and Budweiser Stage are closed. But he’s more optimistic than most.

“No matter what the internet changes, disrupts or kills, I don’t think it will ever change, disrupt or kill our desire to watch and experience live music,” he says. “That’s innate.”

As for The Flyer Vault, he’s still got un-posted flyers of everything from early Beatles and Pink Floyd to Nirvana at Lee’s Palace in 1990, and every flyer leads him to another one. The scope just keeps ballooning.

“That’s okay,” he says. “I guess I’ll just be doing this forever then.”

Check out more vintage Toronto concert and party flyers via The Flyer Vault on Instagram.