NOW MagazineMusicFeaturesThundercat goes from serious to seriously stupid on Drunk

Thundercat goes from serious to seriously stupid on Drunk

The Los Angeles jazz-fusion bassist on the relationship between music and alcohol, the greatness of Gino Vannelli and why you should eat on the toilet 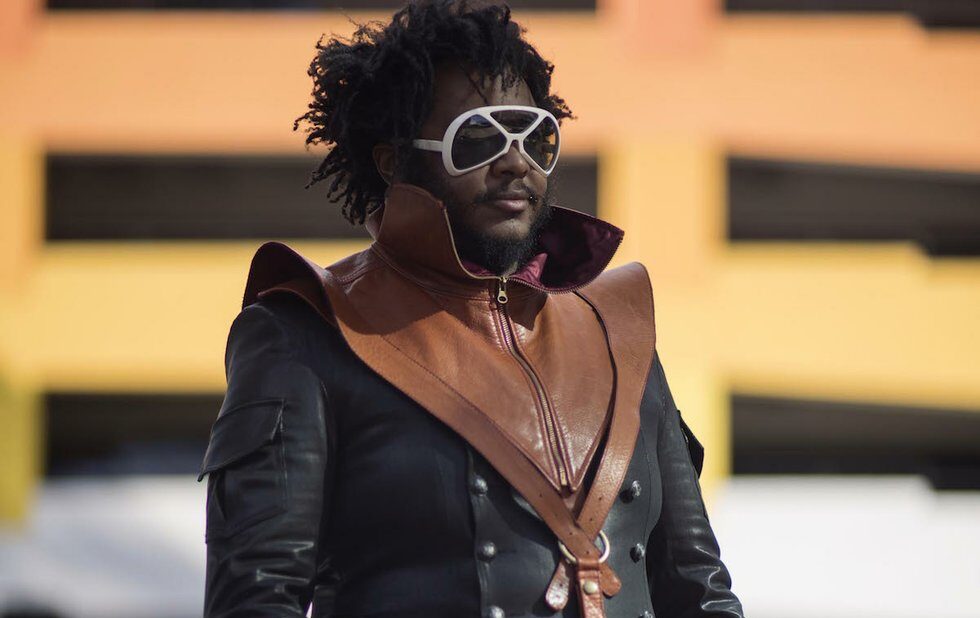 Thundercat’s fourth album will be an intimidating addition to record store shelves. Its cover features a portrait of the Los Angeles-based bassist, aka Stephen Bruner, submerged up to his nose in water and glaring disconcertingly. He could be a movie villain rising from a watery grave, poised to pounce from the sleeve on an unsuspecting shopper perusing a record bin.

Then you consider the title hovering above his furrowed brow: “Drunk.”

“The challenge was to convey the idea with the seriousness but at the same time the silliness,” he says over the phone. “That confused look was genuine. I was like, ‘What the hell am I doing?’ That’s the feeling of the album, too.”

A seasoned player who has worked with Suicidal Tendencies, Erykah Badu, Flying Lotus and Kendrick Lamar, Bruner has evolved from sideman to front-stage performer as Thundercat. His last release, the mini-album The Beyond/Where The Giants Roam, was inspired by grief.

Drunk encompasses meowing, farting, snoring, heartache and mourning. Tonally, it grows more confused and weary as it progresses, its freewheeling harmonies and melodies interrupted by jazz-fusion bass lines that zigzag and tumble around like frantic video game characters. It features a cameo by Lamar, as well as two of Bruner’s singer/songwriter heroes, Kenny Loggins and Michael McDonald. The low-key 80s icons spontaneously re-teamed for the first time in years after Bruner invited Loggins to collaborate.

Speaking with Bruner is not unlike listening to his album. He segues between heavy and mundane topics, outright idiocy and nerdy music references with a fluidity befitting his reputation as a musician.

Why call the album Drunk?

It’s something that describes the feeling of what’s going on now. Everyone just sounds crazy. It comes from a lot of observation and recording of what I’ve seen over the last 15 years amongst my friends and peers. Music and drinking are good old friends.

Why do you think music and drinking are so intertwined?

It’s not an easy road to be a musician or a person who pursues artistic creativity. You get yanked through doors and pulled and pushed – it’s like this current that happens, and you jump in and have to be very lucid to see through most of it or deal with it. And alcohol is one of those things that people have easy access to.

Do you think drinking ever helps creativity?

I don’t think drinking ever is something that would help anybody [laughs]. There’s always Bukowski, but at the same time it’s one of those things that has ups and downs. It has its own life – that’s why they call it spirits. Some people connect and some people don’t.

Lately, so much pop and hip-hop music is about self-medicating and a desire to be completely numb.

There’s a dark story there. It is hard to pursue artistic endeavours, have the world love you all at one time and then hate you just as quick. It’s something a normal person would not experience on a 9-to-5 job, so to speak. A lot of the time it feels like you need help through it, I would think.

What’s your relationship to alcohol?

I don’t drink. I have, and in my personal experience, it’s been fun. And it’s been crazy. And it’s been wild, but at the same time – I forget who said it – you gotta know when to hold ’em and when to fold ’em. It’s just one of those things: you have to know when to let go more than anything, which is a challenge in and of itself.

You’ve said that Erykah Badu will ask you to play a colour, like red. Can you play “drunk”? Is there such a thing as a drunk bass line?

Oh man, it’d be very theatrical. It’d be something really dramatic to do. A lot of the time a sound is about understanding as compared to the actual feel. It’s something that you’ve lived with. It comes through naturally in your feel, but at the same time life takes more precedence over alcohol when it comes to playing. I’ve never tried to be influenced by alcohol when playing.

Is that you meowing on A Fan’s Mail?

That’s me meowing. I call it the Suite II for Tron. That’s me loving my cat again. I love my cat. I don’t know how many times I’ll say it, but I do love my fucking cat. There’s moments when people will think I’m singing to a girl but, no, that’s about my cat.

One song is called Captain Stupido. Is that an alias?

Everybody has it in them to be Captain Stupido. Capitalize on the stupid part. Sometimes you gotta get stupid with yourself and you gotta enjoy your own company some time.

Any tips on how to do that?

Yeah, buy a bullhorn. Dance with your cat naked. Pick things on yourself and smell them. Stand at the refrigerator even though you know there’s nothing there. Sit on the toilet and fall sleep on the toilet. Play video games on the toilet. Eat on the toilet. Undercook a bag of beans, eat it and try not to die. There’s all kinds of fun things.

You worked with Kenny Loggins and Michael McDonald on this album. How did you get into Loggins’s music?

I’m very much into everything when it comes to music. Loggins and McDonald I tend to have a love affair with, musically. You don’t realize you’re having it until you’re singing their songs in the grocery store. You hear Michael come on in the background and you start singing HELLA LOUD. You’re like, “Ooh, this is MY PART!” You try to sing it in his voice or Kenny’s voice.

I connected to Kenny a little bit later in life because I was looking for inspiration for how to approach songwriting. I would listen to him, and it would very heavily affect me as time progressed. I took Kenny’s music very seriously. I’d hear the person in the music and try to understand him more as a person through his music.

One of my favourite tunes is Heart To Heart. That is a tell-all. You can hear the hurting man in there. You can hear the guy in there who’s been through a lot. I connected with that. I understood that. That’s where the fandom would come in.

The show Archer has turned him into this jokey ironic hero, but he’s embraced that by appearing on the show.

You have to. If somebody can make a joke about you on TV, that’s so beautiful. You’ve affected pop culture to that degree. You’ve got to be able to laugh at yourself at the end of the day.

What are your thoughts on Gino Vannelli?

I love Gino Vannelli! I love every one of his albums. He’s one of my favourite songwriters – straight up. He’s from Canada, of course. The moment when you realize the Bee Gees are singing backup on his album… it’s the little nuances that make you go “whoa.” And the songwriting was so immense.

It smacked me like a ton of bricks because it was a marriage of jazz-fusion and the singing. People have to tried to touch on moments that are a little jazz-fusiony, but what Vannelli was on to was so big and ahead of its time.

He has no fear of gigantic creation. You could hear the theatrics, but you could also hear the struggle in his music. I was a huge fan of that.

I remember the first time I heard him – my brother sampled it. He was making a drum beat and sampled the intro to Brother To Brother, and I was just like, “Who the hell played these chord changes?”

So I found the album and I listened to it over again. By the time you get to Nightwalker and the song Living Inside Myself – 80s Vannelli – you’re just like, “Whoaaaaaaa!” I will stop in the grocery store with my fists balled singing the shit out of that song. Usually you’ll find a person who doesn’t understand it and you have to say the lyrics to them. Like, “Listen to what he’s saying! LISTEN!”

To the other grocery store shoppers?

People are looking, like, “What the hell is wrong with you?” But he’s talking about struggling with what love is and trying to understand and having a hard time conveying it. Being able to word that is so frickin’ beautiful. That’s what Gino Vannelli was to me. I actually reached out to see if he’d work with me on the album, but I didn’t hear back. It’s not something that I take offence to. He’s a songwriting titan.

Who are your other songwriting ­titans?

Everybody loves to tag on to this sexual Prince: “Ooh, Prince made it sexy.” But that actually speaks more to his damaged side, in my opinion. Prince is very much more about the sensitive side, and that was finite in the music. It expressed less about the damage compared to love. His first album, For You, is one of the most beautiful albums you could ever listen to. My Love Is Forever is one of my favourite songs ever.

Drunk comes out February 24 via Brainfeeder.