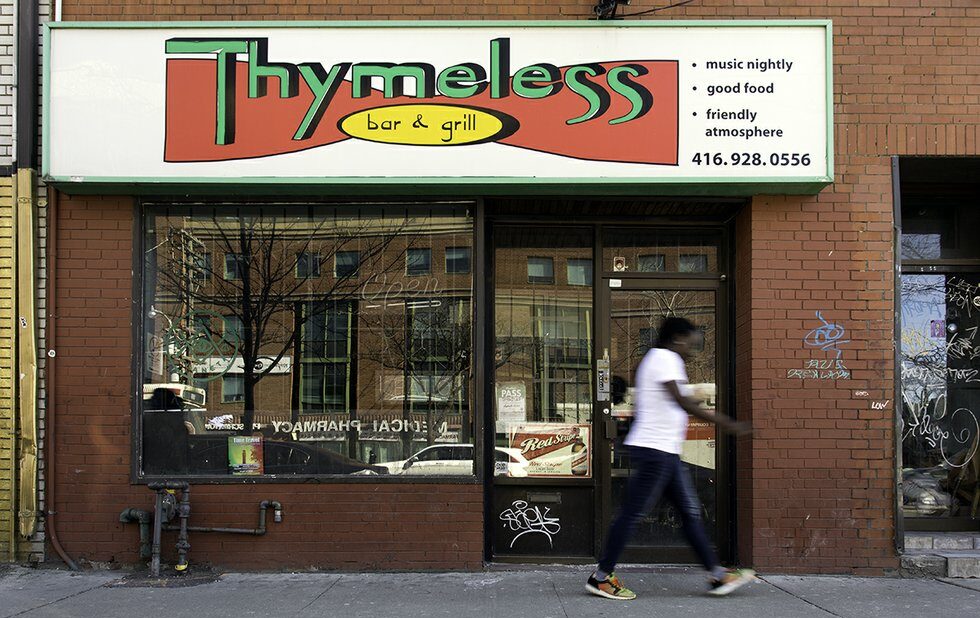 Marcus Sills can remember the first time he went to Thymeless, the beloved College Street reggae bar slated to close at the end of this month after more than 15 years on the outskirts of Kensington Market.

“I think Friendlyness was playing,” says Sills, a DJ who is also known as Marcus Visionary. “I heard the sound system and I was sold. The tops are as clear as day and the sub bass reaches into your soul.”

If you’ve been taking Thymeless and its Jamaican-style sound system for granted these past few years, you have until the end of the month to pop in for one of many farewell parties and to thank owners Hansel Lewis (who created the system) and Barbara Swan for the memories.

The unassuming bar has hosted countless dance parties for reggae lovers, ravers and really anyone who loves to lose themselves in dance music.

Surprisingly, it will remain commercially zoned and will not be transformed into condos – Planet Traveler, the nearby hostel, is planning to expand into the space.

“I’ve grown up around sound system culture, so for me the system is the most important element of a party,” continues Sills, whose Run DNB party will have one final show there before moving to a new venue.

“We were spoiled to have a sound system bar in our city, yet some people would complain about the bathrooms or the decor. Coming from a warehouse rave background, those things are not that important to me. I’m there for a dark room, clean sound and big bass. It’s all about the music for me.”

If you arrive early enough, it feels like a lot of dive bars in this city, and you’ll likely be able to snag a spot in a coveted booth. The basics are there: an ATM, a cash bar, a foosball table. Honestly, the bathrooms aren’t worse than any other dive in this town: at the bottom of some uneven stairs, that familiar, acidic, basement toilet stench permeates your lungs. Sweaty patrons would cool off out on the back patio, playing foosball and puffing on cigarettes (back when we still could).

But the heart of Thymeless has always been the precious sound system, made even more powerful by how it was shared with up-and-coming DJs who played diverse genres of dance music. In addition to connecting the city to roots, dub and dancehall, the venue welcomed many different communities. The Art Gallery of Ontario’s archives contain posters created by the late, beloved queer activist and artist Will Munro for 17 NO T.O. post-punk, no wave, disco and funk-punk parties he threw there between 2004 and 2006. And it welcomed the suburbanites, downtown high school kids, the junglists and the drum ’n’ bass heads. Even I, a white girl from Etobicoke, spun at Thymeless a few times. I still have no idea why Hansel let us anywhere near the sound system I suspect it was because we could guarantee friends would fill the place.

On Twitter, restaurateur Jen Agg said for the last decade, her dishwashers have been exclusively Japanese reggae DJs in the city on work visas. “We did a lot of goodbye parties at Thymeless,” she tweeted. “What a bummer.”

The vibe is a reflection of what Toronto can be at its very best: simultaneously inclusive and liberating.

“Over the many years that I played there I never once saw a fight or an act of violence, just smiles, laughs and joy,” says Isaac Mejia, aka DJ Icespic. “People would come there regularly to release and free themselves from their stress, troubles and problems. It was the place where you would charge your hope battery. It was beautiful to see people from every culture, race and religion get together to enjoy the positive vibes.”

Local broadcaster Garvia Bailey says there is no other place like it, where she would pop in regularly without worry.

It was a tangible connection to Bailey’s Jamaican roots, she says, adding that the building is also significant in Toronto’s Black history: according to Spacing, 355 College was the Universal Negro Improvement Association’s Toronto headquarters between 1925 and 1982.

“The fact that Marcus Garvey – the leader of the Pan-Africanist movement, founder of the UNIA and the man I was named for – might have taken up some of this same space is very powerful to me,” Bailey says. “I hope whoever moves into that address will keep the UNIA insignia tiled into the front step exactly as it is. It’s an integral part of our history, and so is Thymeless.”

“Thymeless was the last venue that housed a system that gives you the music exactly the way it should be heard,” Sills says. “It’s been an emotional month.”