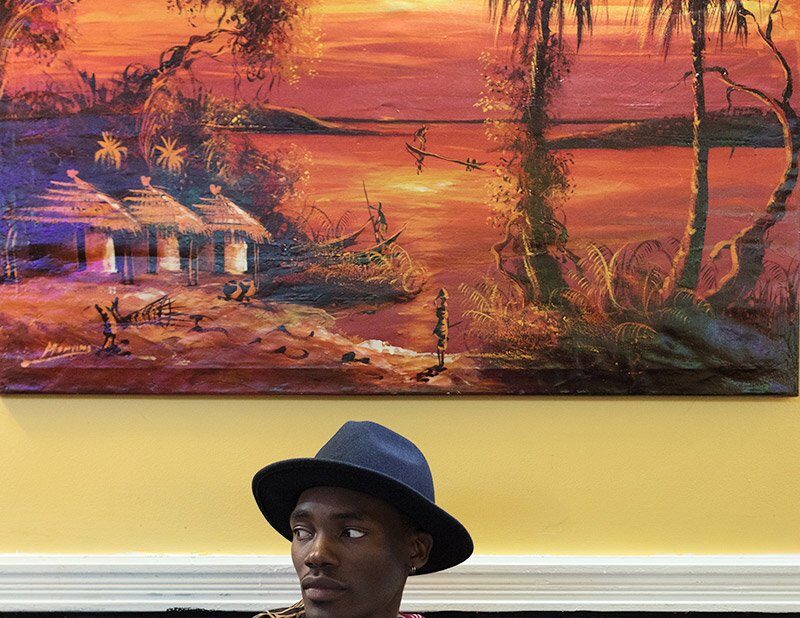 Im praying TOBi hasnt gotten tired of me as we wait for our food at MamaLand Resto-Lounge, a Nigerian restaurant nestled in a labyrinth of shops beside Lansdowne station.

The room swells with the sounds of Congolese singer/songwriter Fally Ipupa, which is playing from the restaurants speakers, and the caramelized scent of plantain frying in the kitchen as we sit silently examining the art on the walls.

Having both arrived hours earlier only to find the restaurant closed, we decided to embark on a spontaneous photo shoot across the west end and have already spent several hours together.

This is what I had planned for the day, TOBi shrugged when our photographer, Samuel Engelking, suggested the proposition to kill time before the restaurant opened. Lets work.

On the heels of his debut full-length studio album, Still, dropping Friday (May 3), TOBi is keen to work constantly and do whatever it takes to make sure the album gets the attention it deserves. And just two weeks after officially finishing the album, hes also already started writing new music.

It feels so good to be able to write again without feeling guilty, he says, comparing Still to a baby who he didnt want to abandon until it could stand on its own two feet.

Born Oluwatobi Feyisara Ajibolade in 1993, TOBi the singer/rapper has been a lifetime in the making. He first fell in love with hip-hop at age of six when he was assigned the role of Lil Romeo in a school play, which required him to memorize a list of Lil Romeo and DMX lyrics. He began writing his own lyrics shortly thereafter at age eight. But it wasnt until his teen years when he started battle-rapping his peers in Brampton, including a young Tory Lanez, that he homed in on his lyrical powers.

The first battle rap I ever did I lost miserably, and that was a wake-up call, he explains, laughing across the table. I was like, Whoa, Im not as good as I thought I was. This is crazy Im getting washed. So I went home and I kept practising to one day become the best.

Meanwhile, he developed a taste for the billowing, sparkly alternative pop of the late 2000s (who can blame him?), citing M83 and Imogen Heap as inspiration to this day. His amorphous tastes made him an outlier. I always felt like a weirdo because I used to listen to such an eclectic range of music, he says. It also laid the foundation for what has become his signature genre-less sound.

Listen to any of TOBis music and youll hear elements of soul, R&B, pop, rap and even country combined in a single fluid motion. While recording Still, he felt particularly inspired by Toronto singer/songwriter Charlotte Day Wilson, whose simmering R&B melodies are a clear inspiration on the 13-song track list.

I was listening to CDW heavy when I was in the creation process, he says. I felt connected to her musically.

Today he counts Snoop Dogg and The Game among his loyal supporters, the latter of whom asked to fly him out to Los Angeles to work on music earlier this year.

Theres a backbone of storytelling present in his lyrics, which prevents his records from sounding scattered no matter how many sounds hes playing with. I love when you hear a song lyric and you can visualize it happening, he says.

Stills through line is a search for home, a journey TOBi has been on since emigrating as an eight-year-old with his father from Lagos, Nigeria, to Canada.

Ive always thought in the back of my mind, Whats my connection to my culture in this new country? How do I still feel like myself in the new space? he asks.

Like most first-generation Canadians, its the for the most part that he occasionally struggles with. But when the food arrives a generous spread of makayabu salted fish, fried plantain, jollof rice, callaloo spinach stew and fufu, otherwise known as fluffy pounded yam TOBi sits up in excitement. He loves the communal aspect of Nigerian cuisine and cant wait for us to experience the smoky flavour of callaloo as it soaks into the thick, warm nothingness of fufu (a dish that tastes like running your tongue through a cloud).

This right here is my best friend, he says, divvying up the steaming mound.

TOBi is happy to spread the gospel of Nigerian cooking Shout-out to my mama dukes / Got me cooking cauliflower, collard greens and callaloo, he raps on Caged Bird Sings but his heritage is also only a small part of his character.

The rest is an amalgam of countless factors that have all led up to the release of Still a largely autobiographical work that chronicles his childhood and anticipates whats sure to be a bright future.

When asked if he ever gets tired from all the hard work hes already put into the project, he turns resolute. Creating is satisfying in its own way it doesnt really feel like work, at least not yet, he says. Its cathartic, its necessary. The goal is to do this for decades.