The second part of the 22-storey mural includes the likenesses of Carole Pope, Rush, Jay Douglas, Gasworks and more 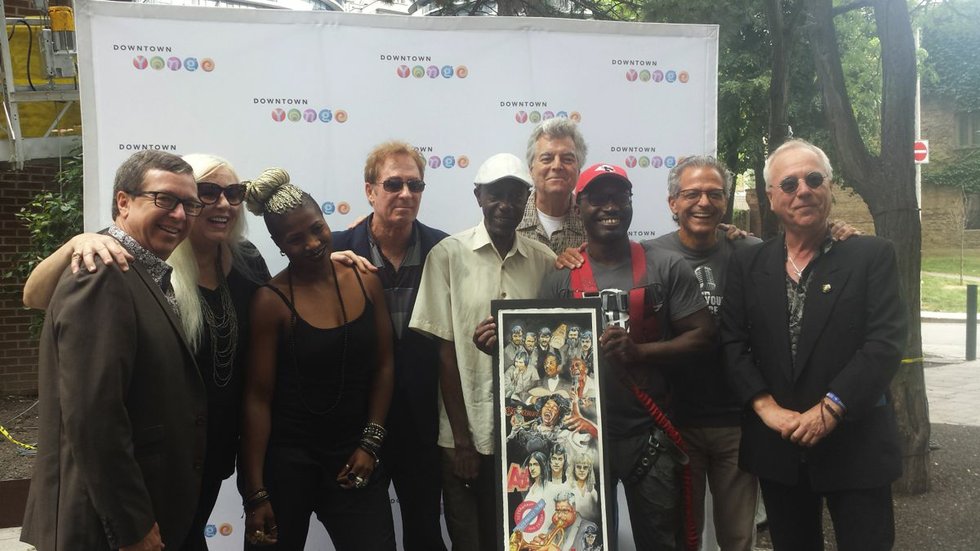 Mark Garner and featured artists at the mural unveiling on Thursday

Mark Garner and featured artists at the mural unveiling on Thursday, August 17, 2017.

Twenty-two storeys of Toronto music history are going up on Yonge Street – again.

The artist’s rendering of the second part of a 70-metre-tall mural dedicated to the local music scene will be revealed at 10 am on Thursday (August 17) at 423 Yonge.

Douglas, Young, Mandala’s George Olliver and Goddo’s Greg Godovitz will be in attendance at the event.

“This mural ties into the importance of Yonge Street and all the artists and venues that have played this iconic street,” Downtown Yonge BIA executive director Mark Garner tells NOW. “Yonge Street contributed significantly to the Canadian music scene, but also to the North American scene.

“The Downtown Yonge BIA wants to preserve this legacy via these murals as it is important to pay homage to our past as we work the present through artist and audience development and plan our future as a Music City.”

Hayles also painted the first part of the mural on the building’s north side. Completed last December, it includes the images of Ronnie Hawkins, Glenn Gould, Oscar Peterson, Jackie Shane, Shirley Matthews and Gordon Lightfoot, among others, as well as venues Le Coq d’Or and Massey Hall, and the Sam the Record Man sign.

The mural is part of the Downtown Yonge BIA’s Music Strategy. More info at downtownyonge.com. Follow the mural’s progress on Twitter at #yongemural.