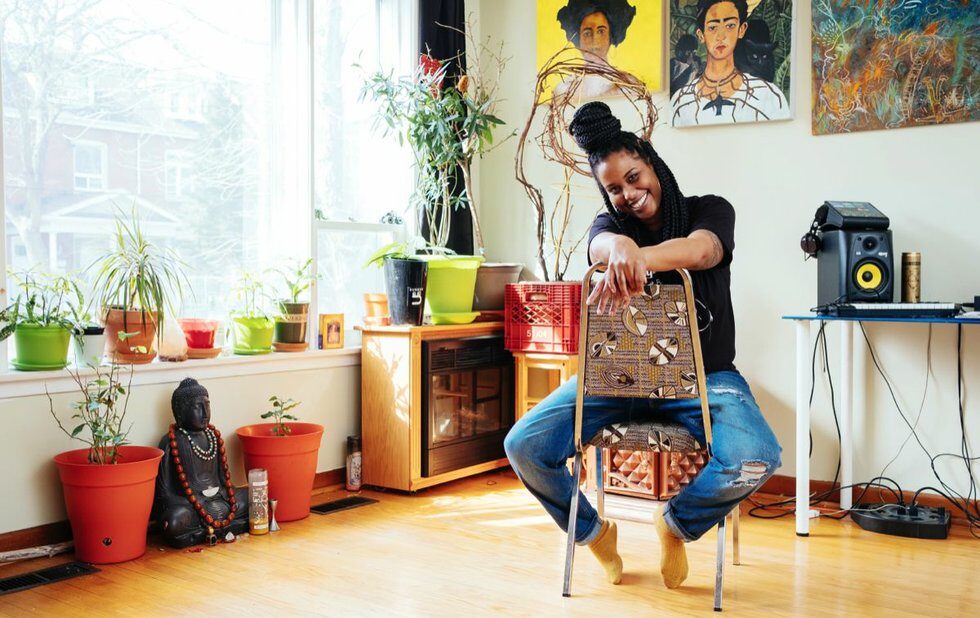 On a brutally cold day, Ayo Leilani, aka Witch Prophet, and her producer, Francesca Nocera, aka SunSun, are having a late lunch in their west-end apartment and pining for Seattle.

“It’s so beautiful there! Everybody’s super-chill, and their weed is completely legal,” Leilani exclaims. They both laugh. “It’s kind of like being in California but not.”

Seattle has been good to Witch Prophet for more than chill vibes and mellow tokes. Leilani has a following there, and a like-minded crew in cosmic hip-hoppers THEESatisfaction and the Shabazz Palaces-affiliated collective Black Constellation.

“Also, that’s where grunge comes from,” add Nocera, who makes music with Leilani as Above Top Secret, and both run the 88 Days of Fortune collective/record label/party promoter. “I love that era I was a teenager when all that stuff was coming out.”

Architect Of Heartbreak, last year’s collaboration with THEESatisfaction MC Stas, blew up huge all over the internet.

“I got hit up by movie people, commercial people asking to license it,” Leilani says. “I’ve never had this happen before. I didn’t want the momentum to go away.”

As the play count shot up, Leilani offered up the stems – a partial, usually instrumental mix of only some of the tracks in a song – online. Within a couple of months, remixes of the track had come back to her from artists from the West Coast and here at home.

Earlier this month, Leilani released five of those remixes, and they’re remarkable for their stylistic diversity, each one latching on to a different idea. There’s Driftnote’s hazy neo-soul treatment, for which Leilani hopes to film a video, but “in L.A. because it’s nice and sunny and we can do outside shots. If that doesn’t happen then I’ll wait till it’s a little bit warmer here.”

Local Casey MQ drives the track into a wonky clip-art sound-FX dimension. OCnotes from Black Constellation wanders through distorted guitar riffage into stately pizzicato strings. Taken together, the remixes are a striking testament to the strength of the original track, and to the wide appeal and versatility of Witch Prophet’s sound.

While the remix EP is a substantial new offering, it’s only a prelude. Leilani’s got a full-length on the way before summer’s end, if all goes according to plan. There are complications – they want to work with a “very popular” American producer but have concerns about the travel ban. There are also funding obstacles and Leilani’s own anxiety about quality control.

But Nocera is adamant. “I’m making sure she’s going to get it done in time. All the songs are all figured out. I don’t know why she keeps pushing it back.”

The first track, Listen, is already out, though, and it’s a monstrously slow-burning self-empowerment strut. Listen speaks to a kind of anxiety that Leilani knows herself, and has seen among her friends. The chance to be part of Lucas Silveira’s recently announced Anchor campaign, aimed at raising awareness about suicide ideation and self-harm among queer, trans and Indigenous youth, furnished the right context for the track and its message of solidarity and perseverance.

“It was a one-day thing,” Leilani says of the song’s creation. “It was my birthday and I wanted to make music all day, so SunSun made this beat and I just started writing. Whatever the beat sounds like, I just let the words come.”

Along with anxiety, themes of love, pride, Black power, magic and vibrations are featured on the upcoming record, tentatively titled The Golden Octave. Its impending release, with the promise of more Witch Prophet shows like last fall’s blowout performance at the AGO, is another reason why summer can’t come fast enough.