The Hamilton "anti-oppressive, queer, vegan doom metal" band have written the concept album for our times 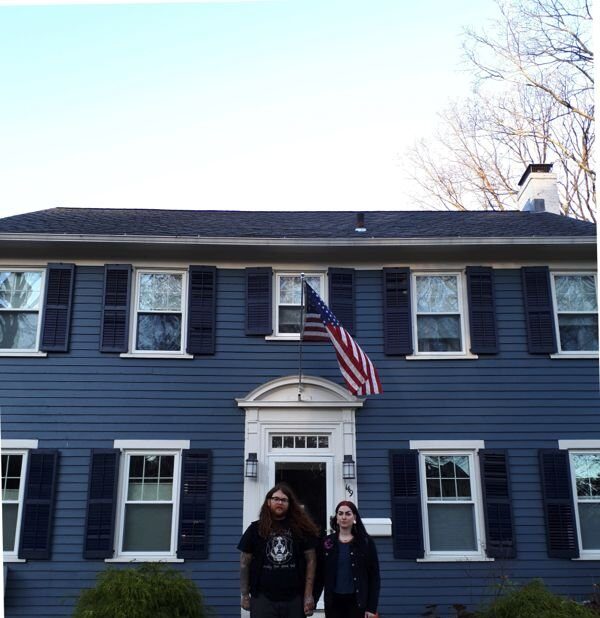 “I feel like if you’re paying attention, there’s always going to be pushback on the internet from people who are feeling threatened by change,” muses Vic, drummer and co-vocalist for Hamilton-by-way-of-St. Catharines metal duo Vile Creature.

The band, a partnership between her and guitarist/co-vocalist KW, openly and enthusiastically label themselves “anti-oppressive, queer, vegan doom metal.” But, as other heavy bands with progressive values have also recently learned, wading into politics can draw scorn from metal fans.

Metal is a genre of extremes: extreme darkness, extreme emotion, extreme sounds. So it has always been alluring to those who see themselves as outsiders, whose identities exist along the periphery of society.

As issues around privilege and societal and structural inequality are coming to the forefront in music scenes, though, the definition of “outsider” is expanding.

So it’s no surprise that a genre of extremes that appeals to outsiders is a terrain of struggle, drawing interest from white supremacists and fascists for the same reasons it appeals to and empowers women, queer people and people of colour.

Vic sees that opening up as a good thing and explains that seeing “other women being able to express themselves in non-traditional ways, like being angry and ugly and just taking up space” is what drew her to the community in the first place. But it’s also why it’s become a site of the resistance and struggle.

“Metal’s not this bubble of a subculture, it’s influenced by what’s happening in the dominant culture,” Vic explains via Skype. The fact that what happens in the genre is symptomatic of a more pervasive cultural hegemony means it’s all the more significant when a band like Vile Creature speak to and criticize how such a culture operates.

Their latest album, Cast Of Static And Smoke (Halo of Flies), is a political allegory that tackles the issue of oppression in a sci-fi realm.

It’s a concept album based on an original short story also written by the band that they published online ahead of the album. It tells the story of five robots born into slavery in a futuristic society and what they discover about themselves, their existence and the world they live in when they get the chance to escape.

Vic and KW followed their gut in the writing process, letting their feelings guide them – meaning that the music and story spooled out simultaneously in a kind of free-form doom.

“We were careful about what components were going in each song, because we wanted it to have a feeling that was in line with the story we were creating,” Vic recalls.

Though this material is more politically overt than their other albums, Vic says the band has been slowly progressing in this direction from the outset.

“Lyrically, our first album [A Steady Descent Into The Soil], came from a place of our own experiences. Then Pessimistic Doomsayer was about getting lost in and feeling okay with escapism, like literature or anything you find to be cathartic. The next logical point was for us to create our own world.”

The band were influenced by sci-fi writers Octavia Butler and Ursula K. Le Guin, who showed them that a writer should, says Vic, “create a world that makes you consider your own and use that as a way to critique what’s going on.”

One of the most poignant moments in the story arrives when the machines have reached their lowest point, dividing the group into separate factions: one wishing to pursue freedom at the cost of their bodies and life, the others wanting to return home so they can live predictably, despite their subjugation. It echoes an age-old dichotomy that certainly resonates with metal’s current tensions.

That song, Forest, Subsists As A Tomb, is the album’s longest track. A slow, Sisyphean riff builds to a searing guitar line care of False’s James Claypool that could crack the earth in half.

Other guests include Cursed’s Chris Colohan and Erin Severson, with the latter serving as the narrator on select tracks as well as on the audiobook version of the story. The album speaks to the power of community and is also the result of it.

The band hope that as they see tensions rising in metal and the world because of “people not having empathy or realizing that people exist outside themselves,” their allegory can serve as an opportunity to see the humanity in marginalized communities and their struggles.