For WHOOP-Szo, there’s more at play than just performing

The London, Ontario psych band aims to connect and heal with every community they play in, and they have big plans for 2018 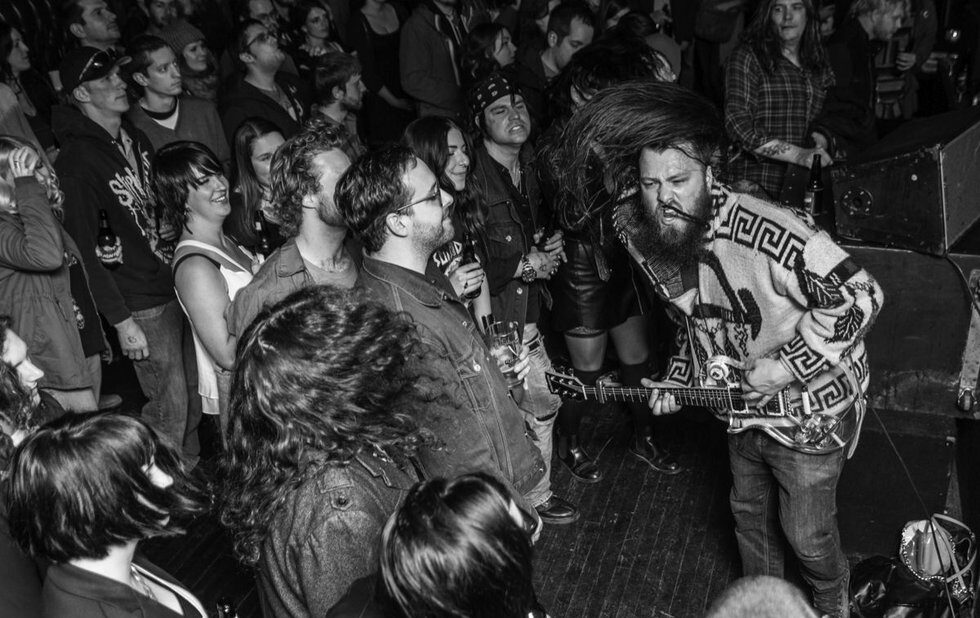 As live venues struggle, festival culture falters, streaming strengthens and hologram technology improves, it’s becoming easier and easier to imagine a music landscape that exists totally in the digital realm. Not so for WHOOP-Szo, who could not exist without the people and scenes that support them and who they, in turn, support.

Their music is as hard to pin down as their whereabouts at any given time. It hops between meditative folk pop and heavy sludge without warning, rarely played the same way twice. The band can shrink and grow, too, with founding members Adam Sturgeon and Kirsten Kurvink Palm usually at the core.

They’re a true psychedelic group in the sense that their personal identity as a band and as people are inseparable from the collectivism of community. For WHOOP-Szo, punk, DIY and psych principles go beyond music scene bubbles and fuse with Indigenous solidarity and healing through music.

They fit right into the Indigenous Next Wave, a group that includes Tanya Tagaq, Lido Pimienta and A Tribe Called Red. “I’m an Anishinabek person, so it is in everything I do: work, music, play,” says singer/guitarist Sturgeon.

And no wonder they’re playing Dan Burke’s Class Of 2018 series of “artists who make the grade and are ready to graduate.”

“We don’t really stop for anybody,” Sturgeon says. Here’s all that they have planned for this year.

A coast-to-coast tour of Canada

Thirty years ago, WHOOP-Szo guitarist/synth player/vocalist Palm’s mother gave birth to her the day after playing Hillside. Last year, Palm played the same festival while she herself was eight months pregnant.

She and Sturgeon have both recently had children with their respective partners, but that won’t slow their tour schedule. They’re bringing their babies on what Sturgeon jokes is the “WHOOP-Szo Family Band” eastern leg of their summer tour, then travelling west for festivals and going acoustic as one of the first bands on Dan Mangan and Laura Simpson’s new Side Door Access platform, which connects artists with hosts for intimate shows.

“It’s our connections to communities that make us thrive,” says Sturgeon. “It’s not about just going into a town, hopping onstage and then in the van. We want to foster meaningful relationships.”

A musical exchange and discovery tour of Mexico

If touring coast to coast isn’t enough, the band is also heading to Guadalajara, Mexico, in March.

This trip, similar to ones they’ve taken to First Nations communities in Salluit, Quebec, and Fredericton, New Brunswick, is more than just a new area to tour or an exotic locale to record in. The collaborative recording project will include local musicians and use pre-Hispanic Indigenous sounds and instruments, including ancient whistles recently unearthed by a family farmer in a freshwater region known as a gathering place for many migratory peoples.

“This area has now been expropriated and faces decimation, so we want to honour it as best we can,” says Sturgeon. A member of the family that discovered it and anthropologists will also take part in the project, which will be filmed for a documentary by Drew McIntosh of the Grizzlar Coffee and Records. “[This way] WHOOP-Szo can also leave our artifacts and history for future generations, and do so in a positive way,” says Sturgeon.

Between studio sessions, the band will interact with students at the Universidad Libre de Musica and tour in scrappy punk style alongside Guadalajara band CANIBALES.

A silkscreen program in London, Ontario

WHOOP-Szo’s 2014 double album, Qallunaat / Odemin, was the result of a year-long Inuit youth initiative in Salluit. They set up a silkscreen apprenticeship program there and now plan to set up a similar long-term program in London so as not to neglect their hometown.

“When I started those silkscreen workshops, I was doing it as part of my DIY record label stuff,” says Sturgeon. “As I learned about my culture, I also began to understand how printmaking has played a role in the reclamation of a lot of art that’s been appropriated over time by settlers.

“I’m a street outreach worker and I deal with the culture around supporting people experiencing homelessness and addiction and trauma every day. I can’t walk outside my door without thinking about the people who don’t have the supports in place to heal and improve the quality of their life. It’s obvious governments and corporations don’t care.

“There is no turning this on and off for me,” he says. “Our work is our music and our music is our work. There’s much more at play than just performing.”