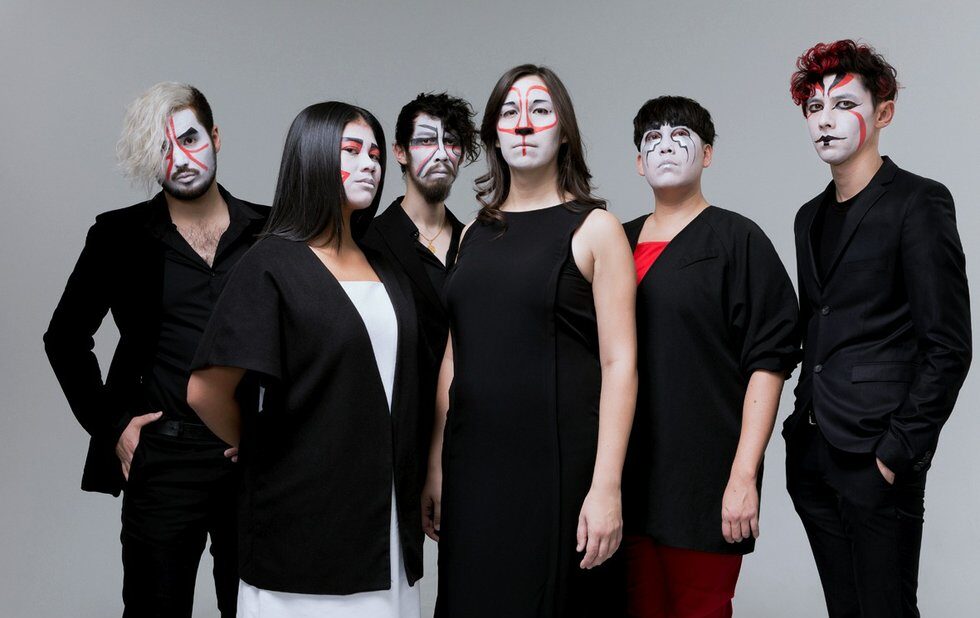 Youre on planet Pureland. Its namesake is from Chinese Buddhism, and this is not an easy world. Rather, its beset by conflict. Youre surviving in a bubble dome 10,000 years after a massive flood. Youre floating in orbit to the sound of heavy guitar riffs and distorted bass.

Youre listening to Dirt, the new album by music and art collective Yamantaka // Sonic Titan, out today (March 23) on Paper Bag.

Dirt is the third part of a story about a sci-fi world that began with YT//ST in 2011 followed by UZU in 2013. While each of the bands albums takes place in a specific time frame on planet Pureland, Dirt is the most narratively ambitious, with the loudest and lowest sound.

Alaska B, Yamantaka // Sonic Titans drummer and leader, describes Dirt as the album equivalent of an animated sci-fi movie from the 80s that went straight to VHS. Also an artist, animator and illustrator, she says the collective undertook an extensive narrative design process to make the album, involving character development and interconnecting plot points.

There are more words on this record than our last two records combined times two, she says over the phone from SXSW.

Theres also more bass, with, for the first time, a dedicated bassist instead of a multi-instrumentalist. And, in keeping with the throwback concept, the album rocks an 80s metal vibe.

We planned the first album to be a bit of everything. UZU was always meant to be about emotion. It was meant to be a melancholy prog record, says Alaska. Its always been planned that our third record would be our heaviest.

That explains why the bands output which flirts with prog, opera and punk doesnt fit into any specific genre. It depends on the story, and the various influences of the collectives members, who at the moment Alaska describes as mostly metalheads.

We dont think of it as a rock band because sometimes we do other projects, Alaska explains.

Theres the video game Severed that Yamantaka wrote the soundtrack for in 2016, for instance. Alaska also points out that in addition to the six performers, the contributors include designers, lighting specialists, new media developers, costumers and theatre performers. Alaska records and produces the albums.

These days, shes grown tired of the whole maelstrom of confusion that follows the project.

The band members often have to correct cultural confusion and ignorance in the media, including a recent post by Tiny Mix Tapes, which premiered their video for Yandere but included a derogatory cultural slang term in the post.

While their music draws from Haudenosaunee and Buddhist themes, and members are Chinese-Canadian, Filipino-Canadian, Japanese-Canadian and First Nations, their music is rooted here, in an Indigenous and North American rock sound.

Its Native American music. We live on stolen land but you cant recognize the sound of the people you took it from? Alaska asks. The cultural influences we bring are not foreign because we were raised in Canada.

Were here to rock, not wax philosophical about culture and race all day. We believe in harmony and connection between different people no matter what your background is and thats the point of our group. Our engagement in our culture is a celebration.

A big part of that celebration is playing live. Alaska says theyre taking a note from Queen and playing some but not all the songs on Dirt on this tour, with a few older tracks also included in the set list.

Theyre also starting work on their next album, which she describes as a seed that is germinating.

The new albums concept is, of course, already planned.