The Los Angeles rapper's April 23 show at the Phoenix will go on, but not under the CMW banner 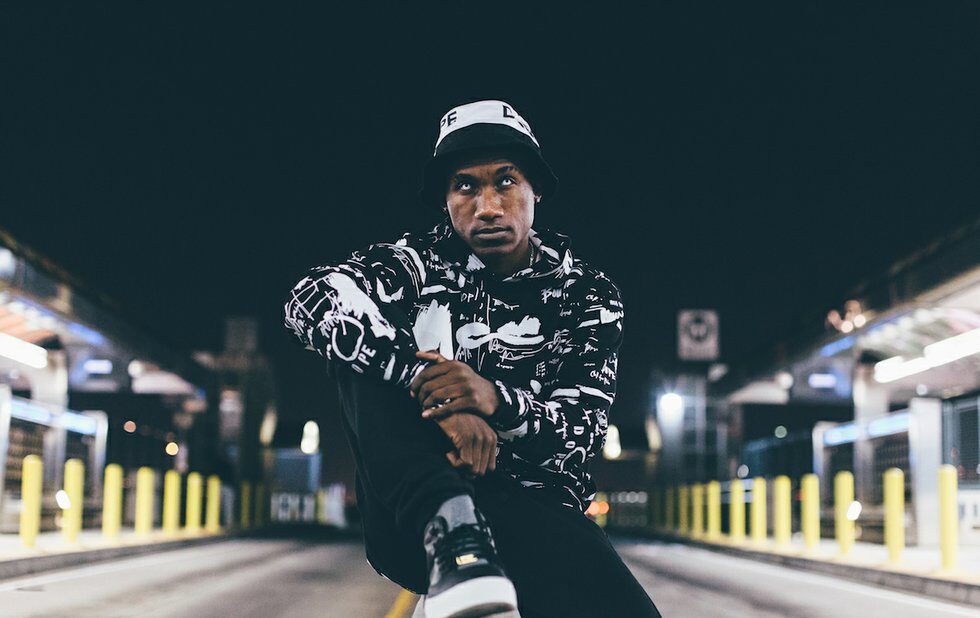 Hopsin has been removed from Canadian Music Week over the lyrics to his song All Your Fault.

The annual event added the Los Angeles rapper/producer to its lineup in February, but pulled him over the weekend after community activist Erica Shiner started a petition urging organizers to cancel the show over “violently sexist” lyrics.

“Hopsin’s lyrics are riddled with gendered violence,” the petition, which has 49 signatures, states, adding that CMW receives funding from the Ontario government. “Women are physically assaulted and murdered on a regular basis from coast to coast in this country. Shame on CMW for supporting an artist who promotes violence against women.”

The petition refers to recent single All Your Fault in which Hopsin (real name: Marcus Jamal Hopson) raps, “I fucking hate this bitch, her name could sit on a grave / Only reason she ain’t dead is ‘cause my kid on the way.”

A day after Shiner posted the petition on Facebook, festival organizers dropped Hopsin’s April 23 show at the Phoenix from the lineup. The show is still happening, but without CMW affiliation.

In a statement, a spokesperson for CMW said the concert was booked by third-party promoter Embrace, which approached organizers to co-host since it fell during the festival’s dates. No CMW funding was used to organize the show, which will happen as planned, and it has since been removed from CMW’s website.

“We have no financial investment in the event, and will not be hosting it on our website or social channels,” CMW programmer John Kastner wrote in an email statement to Shiner. “You have brought to light a very important conversation regarding lyrical content and censorship, and while we recognize the challenges it poses in programming a festival that appeals to a wide variety of people, we aim to uphold a sense of positive values and contributions to our community responsibly.”

Reps for Embrace and Hopsin did not respond to requests for comment as of press time.

Hopsin has not shied away from addressing the situation alluded to in All Your Fault.

In a Facebook post dated January 6, Hopsin explained that the song was partly inspired by a relationship with an Australian woman that resulted in his arrest last year.

The music video for the track (below) also depicts the MC getting into an altercation with a woman who then snaps photos as he is arrested by two police officers.

On September 8, Hopsin pled guilty to assaulting a woman in Sydney, Music Feeds reports, after being arrested four days prior and charged with common assault. He was given a two-year good behaviour bond. The magistrate also granted the woman a 12-month Apprehended Violence Order, which is similar to a restraining order.

In 2015, Shiner started the successful petition to remove rapper Action Bronson as the headliner for a free outdoor concert  at the NXNE festival over lyrics in his 2011 song Consensual Rape and music video Brunch. That petition attracted international media attention and nearly 44,000 signatures.

“I’m very appreciative of CMW’s decision to remove Hopsin from their programming,” Shiner tells NOW. “I’m also impressed with the speed at which they responded to this issue once it was brought to their attention. I think the way the Action Bronson petition brought this issue to forefront of public consciousness created a shift in our perspective and our standards for government-funded programming. Women, people of colour, the LGBTQ community and other oppressed groups have the right to demand that our public spaces and public dollars don’t go toward art that promotes violence against us.

“I hope that CMW will do more in the future to apply an anti-oppression framework to their programming,” she continues, “and to place women and people of colour in more decision-making roles within their structure.”