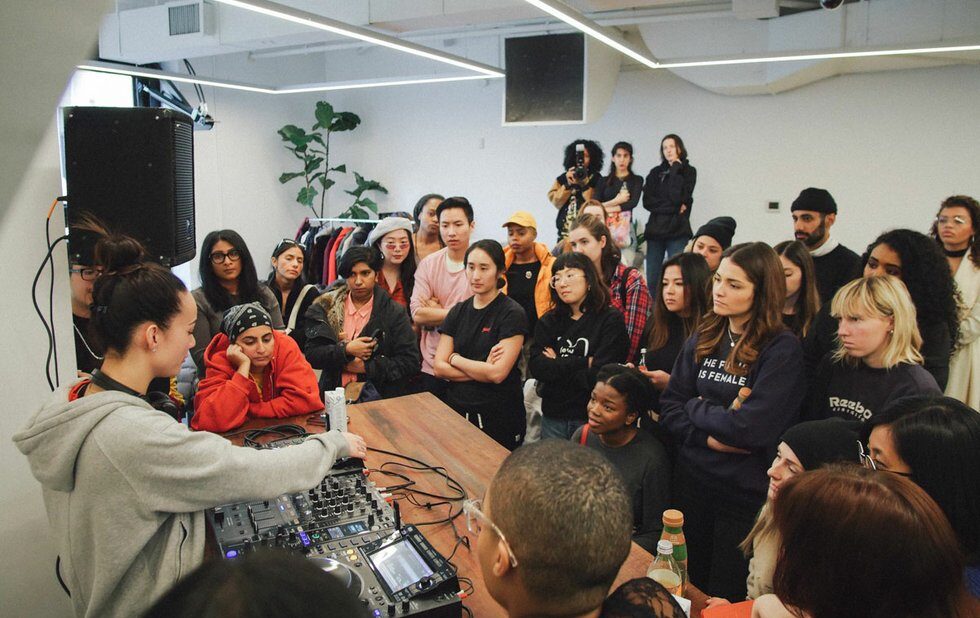 Intersessions, a Toronto workshop series aimed at addressing the gender and sexuality imbalance in electronic music, is launching a three-month residency next month. Starting February 9, the backspace of Lululemon’s Toronto flagship store (318 Queen West) will transform into Intersessions Clubhouse, a free drop-in space equipped with CDJs, a piece of digital equipment used by professional DJs to play music from USBs and SD cards.

“We’re building a mini club at the back of Lululemon,” says Chippy Nonstop, a Toronto DJ who runs Intersessions. “We’re going to have CDJs set up there for three months straight and anyone can go and practice anytime.”

Since 2016, Intersessions has offered free workshops in Toronto, Vancouver and Los Angeles specifically for women and folks identifying as LGBTQ+. The workshops are taught by professional DJs and attendees of all levels get hands-on experience with CDJs, turntables for vinyl, Traktor and other software.

The Clubhouse will be an interactive installation designed by Toronto artist Camille Jodoin-Eng, known online as Camille Fuzz.

To kick off the residency, Intersessions Clubhouse is hosting a beginner’s workshop on CDJs and turntables taught by Toronto DJ Asey and the UK’s Nightwave on February 9. There will be a party following the workshop with performances by locals Nino Brown, Karim Olen Ash, Ace Dillinger, Chanl Marshl and Chippy Nonstop.

On March 3, Toronto’s Katie Lavoie, who DJs under the name Babygirl, will host a Community Meeting panel on overdose prevention, harm reduction and mental health in nightlife scenes. And on April 20, Josephine Cruz, who DJs as JAYEMKAYEM, recently co-launched the record label Bare Selection and until recently co-ran the online radio pop-up Istolethesoul FM, will lead an event on how to produce and curate your own radio show.

Intersessions Clubhouse runs until April 30. To RSVP to workshops and events, check out Intersessions on Facebook.