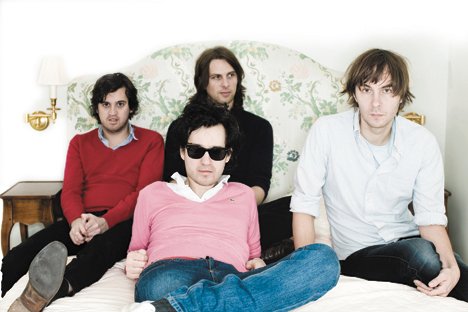 Laurent Brancowitz is less than two hours from walking on stage for a sold-out show at Manhattan’s Hammerstein Ballroom. The Phoenix guitarist sounds calm and unaffected by the fact that in a very short amount he’ll be the focal point of 3,500 screaming fans.

It’s been an incredible year for his band, so maybe he’s getting used to the mania. Their incredibly strong new album, Wolfgang Amadeus Phoenix, has elevated the Parisians to new a strata simply on the power of its songwriting.

Amadeus is no over-hyped debut from an indie band you’ll forget about in three months when the press cycle moves on. Phoenix have been working their craft for a decade, progressing with each album, touring continents and gaining a base. They didn’t need viral internet clips, gimmicks or even a marketable image, it’s all been about the music.

Brancowitz was kind enough to take moment with NOW just prior to their NY gig.

Do you have any pre-show rituals?

I drink Saki, that’s my ritual. Cold unfiltered Saki, the milky kind. But everyone (in the band) has different things. Sometimes we sing French songs, sometimes we stretch. I’m a bit nervous, there’s a tension building.

Looking back on the decade, you must be proud of where the band is at this stage.

We still love each other, that’s the best accomplishment. I remember when we started it would be difficult to keep being naïve and sweet, but we are still friends and that’s so important. The accomplishment has been to stay unprofessional for a long time.

Why do you think Wolfgang clicked with North Americans, compared to Phoenix’s previous three albums?

I don’t know maybe because it is the most French, maybe you need that. Also working with a small label has been great. They have the right rhythm and we have a great relationship with clever and respectable people who work there. I’m not really sure, why do you think?

Um, you wrote really great songs? Not that you wrote bad songs before, but Amadeus is loaded.

Well thank you. I agree.

Do you view the Lost in Translation soundtrack as an important step in the band’s career?

It was a lovely movie but we never thought of it in terms of career. It was the first exposition of the band in America but we don’t think about that kind of thing. It was important that we were part of something good. But again we don’ think that way.

It‘s likely that Wolfgang will top many best-of lists this year. Will it feel strange to see that?

It will feel good I think. But I am not so sure it is true.

I liked the Dirty Projectors. He (Dave Longstreth) is a great puppet master.

Was there any hesitation about giving your song 1901 to a car commercial?

I don’t know if it is good, but for us it is exotic to be in a Cadillac car commercial. Maybe because we are French. It would be like champagne for you. For us it’s very abstract. We did not think about it much, which could be dangerous because we are control freaks about our music. But for French, it is not disgusting for us.

I found some copies at my parents’ place recently. They were unopened, maybe about five of them. It was such a small run… maybe 500? How much do you think I could get for them?

Lots. Can I have one?

Maybe you can have one if we become friends and I like you. Then maybe…

Read an interview with Phoenix from 2006 here.