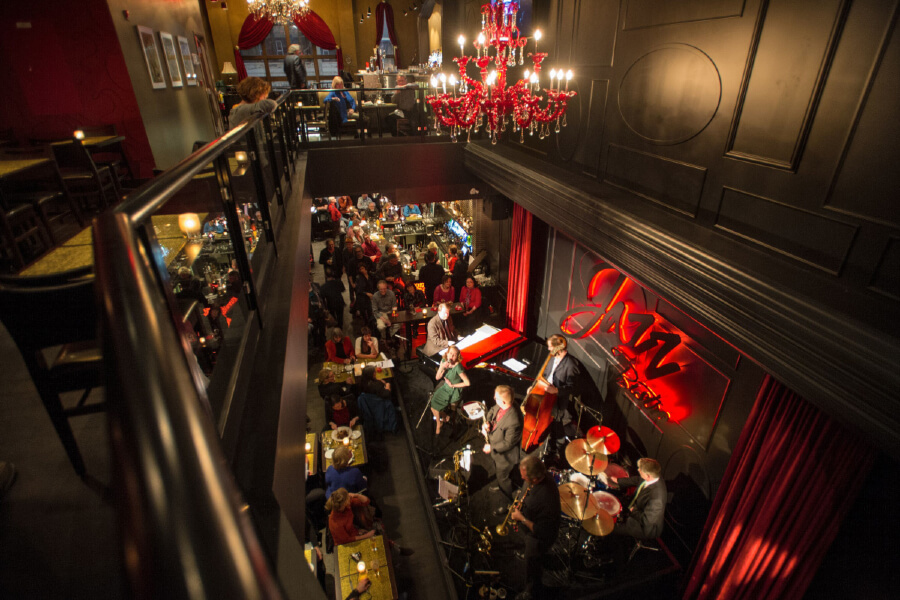 Jazz Bistro, seen here in its pre-COVID form, will soon be making its socially distant return.

Stage 3 is here, and Toronto is allowed to have live music again. But there hasn’t been a glut of options for concerts. Aside from the drive-in scene, many music venues are finding the new COVID regulations – which include a max capacity of 50, social distancing and plenty of plexiglass – not worth the effort to reopen.

This Friday and Saturday (August 14-15), Jazz Bistro is making a return. The restaurant and music venue on Victoria Street will host two nights of music by Colin Hunter & the Joe Sealy Quartet, which marks a full-steam return to live music. There will be two sets of music every night from Wednesdays to Saturdays.

They’re not the only ones giving indoor live music a try. College Street whisky bar the Emmet Ray is now allowing you to reserve spots for its weekly Jazz In Toronto livestream, including this Saturday (August 15) with Jenna Marie Pinard & Jay Yoo. Queen West record shop and cafe Antikka has Sean Pinchin on August 21.

Jaymz Bee, the entertainment director at Jazz Bistro, says he empathizes with club owners frustrated by the inability to do concerts safely or profitably during the COVID era, but that the Victoria Street venue is in a unique position.

“Most venues don’t have two floors for 200 people. We have 50 on two floors,” he says. “The tables are properly distanced. Masks are mandatory except while you are in your seat (entering, going to the bathroom, etc.).

“At Jazz Bistro, people talk quietly over dinner but then stop and listen to the music. It’s much different than clubs where people have music as the background or where people are encouraged to dance. Most smaller venues or rock venues can’t afford to do this. We are an upscale restaurant, and even if we barely break even for now, it’s worth doing.”

“Good for the city”

Instead of 50 people on each floor, it’s 50 for the whole venue (plus another 18 on the street CafeTO patio, if you just want to eat). The venue is big enough to ensure distancing, plus Jazz Bistro owns the building so they don’t have to worry about rent. The tables have been cleared from the front of the stage, and the singers and brass and woodwind players will be cordoned off by plexiglass. The bar areas will also be sectioned off.

Owner Joan Hunter jokes that her car is filled with plexiglass. Like other venue owners, she admits she doesn’t envision Jazz Bistro making any profit from concerts, but says it’s worth doing anyway.

“If we can get the ball rolling and show that we can do this safely, it’s good for the city,” she says. “It’ll keep our staff on and give them something to focus on, and it’ll give the musicians live music again.”

Bee is focused on booking small combos, scaled-down bands, Jazz Bistro regulars and musicians who lost gigs during the pandemic. The musicians will be taking a hit too, Hunter concedes; they won’t be be able to pay them as much as they usually would. Instead, they’ll be pushing the tip jar and making sure diners know that’s the way the artists are making a profit.

Wednesdays and Thursdays will be $15 cover with an a la carte menu, while Friday and Saturday is a $55 dinner and a show three-course prix fixe.

“So many musicians are hurting so bad, it’s hard,” Hunter says. “If they can look after us by relying on tip jar a little bit, and we can look after them by giving them a gig, it works both ways,” she says. This has been devastating on musicians and venues, which is terrible to see because competition is a good thing.

“Music is the heartbeat, and if you don’t have a heartbeat it’s just sad.”