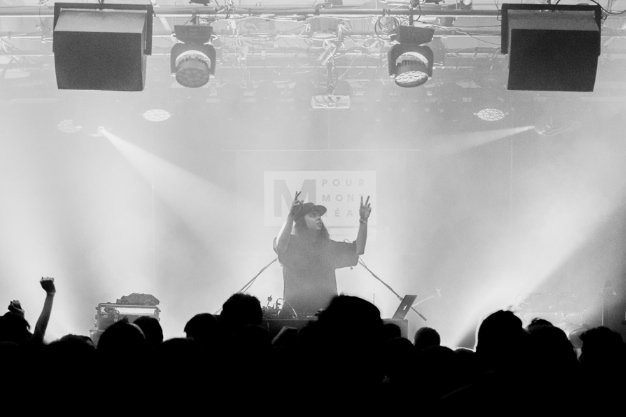 Unlike its comparatively quiet opening two days, M for Montreal exploded over the weekend, making it impossible to discover all the acts I’d planned to, and bringing back the familiar FOMO feeling I associate with SXSW and NXNE.

Despite there being so much to see at so many venues, I had to catch Dan Boeckner’s snyth-pop trio Operators (who played as a four-piece) again. Boeckner was every bit as compelling as he was Wednesday night, and equally charismatic is keyboardist/vocalist Devojka, who’s a force onstage, music-, style- and personality-wise: “It’s about fucking that is so good you think that it’s love,” she said before leaning back into her instrument for the band’s throbbing single True.

Before that, Toronto’s Moon King (fronted by Daniel Woodhead and Maddy Wilde) rocked out so much harder than the fuzz-pop genre they’re sometimes tagged with suggests. Woodhead is a ball-of-energy frontman who took the lead for the first few tunes. But the group worked best when, per Woodhead’s suggestion, Wilde’s guitar and vocals were cranked up, and the two childhood friends shared the spotlight and some pretty rad harmonies.

Sandwiched between those bands, it was hard for Montreal ambient poppers Seoul to make a huge impact, though their 80s-soft-rock-recalling songs were dreamy and pleasant.

Across the street, Toronto’s A l l i e put an electronic spin on neo-soul, showing off languid, lovely vocals that were never overshadowed by her beats.

The hot ticket Saturday was San Fran punk rockers Thee Oh Sees, who sweat it out for over an hour at Le National. They were a rare international band at the mostly Canadian festival, probably incorporated because their Montreal tour stop coincided with the fest. Technically, they were good and tight and certainly filled the room with lots and lots of facial-haired fans.

But more interesting, and more puzzling, were Los Angeles experimental outfit Jack Name (currently on tour with Thee Oh Sees) who went on just before, playing in almost total darkness. Constant was their pyschedelic squalls, guitar noise and experimental loudness. Yet, the structure of each song was different: one sounded like a spaghetti western soundtrack, for instance, while another could have been on 90s pop radio had the drone been turned down a bit.

Elsewhere in the city, Franco hip-hop, indie rock and dance music pulsed out of incredible venues across town – Montreal really has us beat in the creative/DIY event space category – until the wee hours. Nine years in, the festival’s gotten bigger, but still feels small and manageable. Lineups are rare and vibes are laidback.

The FOMO is real, but that comes with the territory.