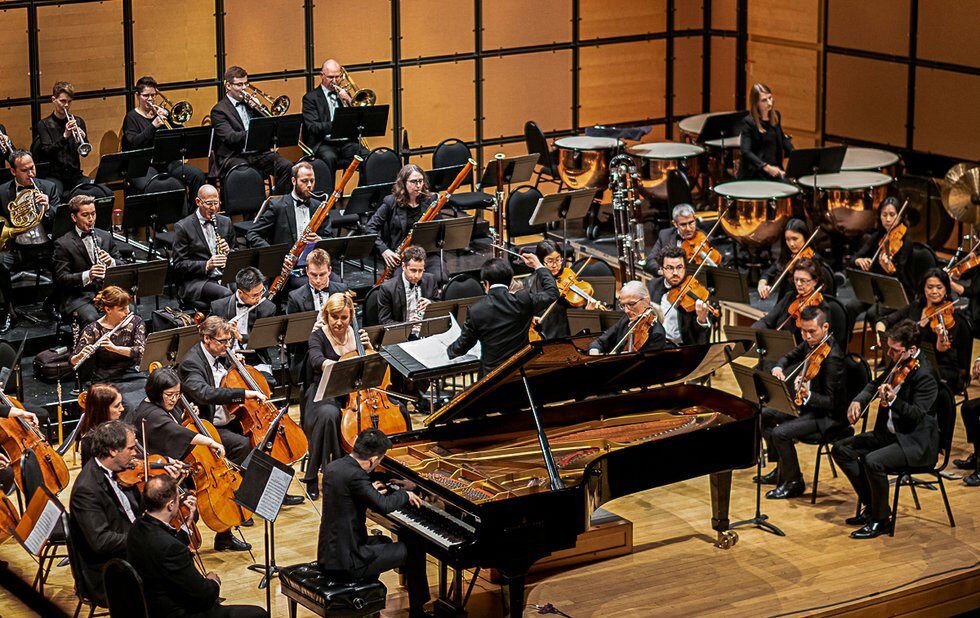 The successful tech entrepreneur has decided to pursue his love of classical music – in a big way. He’s taken up the baton and assembled an orchestra of top-tier professional musicians, the Mandle Philharmonic. They’re performing An Evening With Brahms concert on Saturday, January 25, at the Meridian Arts Centre, with two major Brahms works. January 25 also happens to be Chinese New Year, and they have added the popular Spring Festival Overture to celebrate it.

Cheung’s love of classical music goes back to his teen years. He vividly recalls hearing Saint-Saëns’s 3rd Violin Concerto on a little radio with an antenna.

“And I remember thinking, ‘Wow!’” says Cheung, on the phone during the holidays. “It was a life-changing moment.” But his parents dissuaded him from seriously studying music.

“I’m from one of those Chinese families who didn’t encourage extra-curricular activities,” he says. “We had an upright piano, and one of my sisters took lessons. I remember picking up a score and trying to play it. It was a Chopin piece, with five flats. I cut out pieces of paper to mark out the black keys on the piano.”

When he was in Grade 8, however, he joined the school harmonica band and the harmonica became the only musical instrument he plays. His love of music continued when he came to Canada in 1968 to study at the University of Manitoba, where he took a degree in computer science, but also took several music courses, including one on conducting with the esteemed composer, conductor and violinist Arthur Polson.

Through Polson he became connected with the CBC Radio Orchestra, which led to Cheung performing Arthur Benjamin’s Harmonica Concerto with the CBC Winnipeg Orchestra.

“About five years ago, I realized I didn’t own a copy of the recording, and so I contacted the CBC,” says Cheung. “Lo and behold, they had it in their archives.”

In his 20s and 30s, he listened to lots of classical music on records and CDs – “this was before the days of Google and Apple Music,” he laughs. But during his 40s, when he was building his tech company, ComputerTalk, he stopped listening and devoted his energy to developing smart telephone systems.

That all changed when, in his 50s, his love of Gustav Mahler resurfaced. He calls the Austro-Bohemian composer’s oeuvre “a whole new experience.”

In November 2018, he conducted Mahler’s 4th Symphony, then Mahler’s 1st Symphony in March 2019. He plans on conducting other Mahler symphonies, including the second and the eighth.

Cheung says he doesn’t have a particular style of conducting. “I didn’t have a coach or mentor or teacher,” but does watch performance videos of the Berlin Philharmonic, amongst others,  online. “You can learn quite a lot through that.”

He also learns from the musicians in his orchestra.

“They’re phenomenal,” says Cheung. “I’m fortunate to be able to work with them. They’re not community players. They’re professional musicians. When I first started, I told them, ‘I’m using you guys to help me learn the score. I’m not really here to conduct. I’m here to learn through you.’ ”

Judging from the success of MandlePhil’s first concerts performing Mahler’s 4th and Beethoven’s 5th Symphony at Glenn Gould Studio, and the following concert featuring Mahler’s 1st Symphony and Tchaikovsky’s 2nd Piano Concerto at the Meridian Arts Centre, Mandle Cheung has quickly grasped the role of the conductor and the result is a symbiotic relationship between the musicians and him. The unique level of engagement onstage was felt by all in the audience.

The January 25th concert includes Brahms’s Symphony No. 1, plus his 2nd Piano Concerto, with the young Korean pianist Sae Yoon Chon as soloist.

“He’s unbelievable,” says Cheung. “He’d performed Brahms’s 1st Piano Concerto before, and I heard tapes and saw videos of that. But I really wanted him to do the second, so I asked him. He had never played it before, but he wanted to learn it. A week before our first rehearsal, he sounded great. Then he flew to Dublin to study it with his teacher. When he came back and showed what he’d learned, it was mind-boggling.” Cheung added that he didn’t think he shared with Chon the fact that it was also his first reading of the Brahms concerto!

Cheung is determined to keep the ticket prices reasonable. Even though the musicians are being paid union rates and fees, the top ticket price is only $17.

“I want to make this music accessible, especially for young people. I’m not in this to make money. It’s all about learning and making music”.

As for the future of the orchestra, Cheung has a long list of composers he’d like to conduct. He plans on doing four more concerts this year.

And what would he say to the parents of musically gifted children?

“At the end of the day, it’s up to the children themselves, but if they have an interest, you need to encourage them,” he says. “That makes a huge difference.”