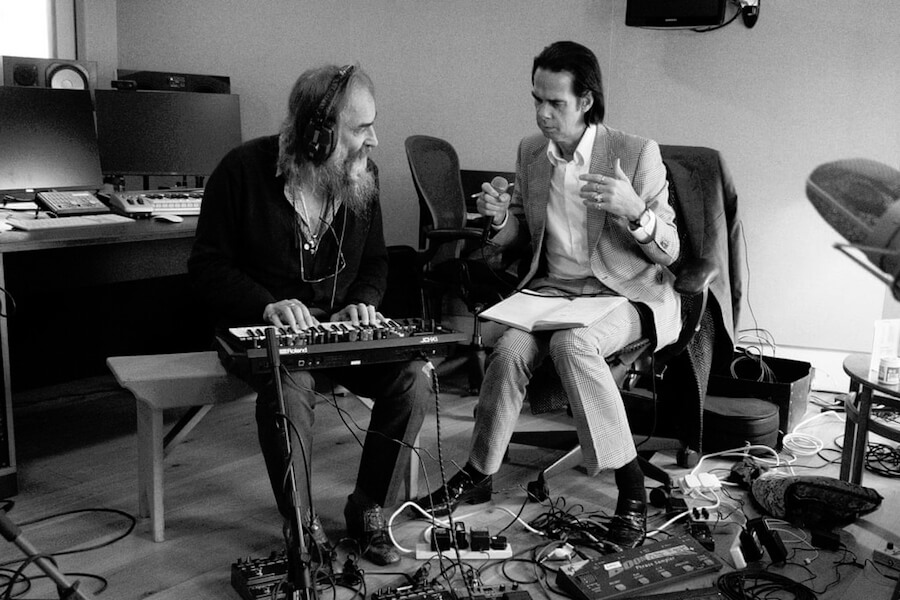 A couple of years ago – before the time of the world’s great undoing – Nick Cave found himself in British Columbia’s Massey Theatre. The occasion was one of his Conversations With… shows, and he spent part of the night solo at the piano, and most of the evening answering questions from fans.

One of those questions spiralled off into a self-assessment of his life’s work, the singer and all-round renaissance man acknowledging that he’s constantly evolving as an artist. And that his determination to keep breaking new ground is both terrifying and rewarding.

The reason? Every time he makes a new record, his fans have to ask themselves a question: “Do I still like Nick Cave?”

That serves as a great entry point for getting a handle on Carnage, which has come out of nowhere as a surprise album. Recorded quickly in lockdown, the eight-song release finds Cave teamed up with Warren Ellis – his trusted artistic foil in the Bad Seeds, right-hand man in Grinderman, and go-to collaborator for soundtrack work (The Road, Hell or High Water, The Assassination of Jesse James by the Coward Robert Ford). And, covering everything from break-of-dawn gospel to minimalist electro, it’s unlike anything the two have done before.

As hinted by the record’s all-caps title, the two are fixated on one thing here: the hell that is day-to-day living in the modern world. A world scarred by a raging global pandemic, rising right-wing extremism, global warming, and Great Depression-like unemployment. A world where Black lives often don’t matter, as seen by the deaths of Breonna Taylor, George Floyd, and Daniel Prude.

A world where half of America thinks Donald Trump is the greatest thing since Adolf Hitler. And a world where the news cycle is a forever-repeating loop of gun violence, religious persecution, ethnic cleansing, global hunger, and – let’s face it – general endless intolerance.

Hand Of God sets the table for Carnage, Cave (and by association, Ellis) heading to the mythical purifying river that runs through pretty much every religion ever dreamed up by mankind. “Hand of God/Hand of God/Hand of God/” is repeated menacingly and mantra-like throughout, until the final lines: “Going to the river/Where the current rushes by/Gonna swim to the middle/Stay out there a while/Let the river cast its spell on me.”

Lest that rile up the atheists among us, keep in mind that Cave has always suggested that God can be whatever you want Him, Her, They, or It to be. Which explains why he can lovingly praise a divine higher power in Into My Arms, and sing about crawling over 50 good pussies just to get to one fat boy’s asshole in Stagger Lee. The message of Hand Of God is clear: you need to find something to hang onto in these most difficult of times if you’re doing to make it through to the other side.

If looking for an uplifting time from there, you’re often in the wrong place. Blending haunted carnival keys, doom-throb bass, and Babylon-nightmare strings, Old Time has Cave intoning, “Everyone’s dreams have died” and “I’m not coming back this time.” And Shattered Ground cuts to the core of how we manage to cope these days when Cave sings, over ghost-shimmer synths, “There’s a madness in her and a madness in me/And together it forms a kind of sanity.”

The towering centrepiece to Carnage is White Elephant, which is one of the greatest songs that Cave and Ellis have ever collaborated on. The track paints a damning picture of the racial division that plagues much of the planet, including America, where the Australia-born Cave now lives: “The white hunter sits on his porch/With his elephant gun and his tears/He’ll shoot you for free/If you come around here.”

Not done there, he continues with: “A protestor kneels on the neck of a statue/The statue says I can’t breathe/The protestor says, ‘Now you know how it feels.’”

White Elephant starts out with reverb-bathed percussion and a grey-as-November baroque string loop, only to explode into something obscenely magical three minutes and 21 seconds in. Cave and Ellis suddenly turn on their heels, rejecting doomsday bleakness and launching into what sounds like a Deep South revival tent at its most joyfully soulful.

Need a sign that maybe, just maybe everything is going to be okay despite the emotional carnage caused by life as we’ve come to know it? First, keep in mind Cave’s belief that God can be anything you like: Leonard Cohen, Thomas Hardy, Flannery O’Connor, or (most deservedly of all based on his monumental work here) Warren Ellis.

Then shelve all the misery and join in when the choir roars up with “A time is coming/A time is nigh/For the kingdom in the sky/We’re all coming home/In a while.”

When it’s all over, maybe ask yourself whether you still like Nick Cave. With the caveat you won’t need to after the monumental triumph that is Carnage.

This review originally appeared in the Georgia Straight.