(Air Canada Centre, October 31)Jigga owned this decade as far as rap is concerned, and his Halloween date at the. 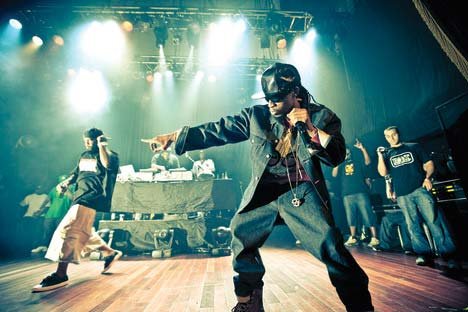 Jigga owned this decade as far as rap is concerned, and his Halloween date at the ACC confirmed why. Hova was in top form, learning the same day that he’d just clocked his 11th straight number-one album.

This adorable synth-rock couple stole our hearts at NXNE with their joyous enthusiasm and boundless energy, even though Kim was suffering from some nasty food poisoning.

Look, we’re as burned out as anyone on singing BSS’s praises, but this Olympic Island makeup date had an infectiously utopian vibe happening. You really had to hate your city not to feel something here.

Take one Ethiopian jazz legend, add a pioneering Dutch punk band and you end up with some of the most exciting live music we heard this year.

Youth Brigade’s NXNE show was rammed wall-to-wall with hardcore kids, mods, crust punks and every other counterculture subset (as well as “normals”), and they were all going bananas. The Stern brothers – the eldest of whom is pushing 50 – played with such conviction that you could have sworn it was 1982.

The mainstage at TIME was all the proof anyone needed that Toronto is enjoying a world-class electro moment. Killer back-to-back synth-centric, strobe-lit sets by TMDP, Parallels and Crystal Castles brought down the house.

The wonderfully weird one-man band augmented his table of electronic gizmos with a 15-piece orchestra and blew our minds with his interstellar campfire songs.

Take one beautiful venue, mix in five beard-and-plaid Seattle folk rockers whose magnanimous singer has a voice that’ll make you weep and what do you get? Transcendence.

Even the crackling sound system (which may or may not have been intentional) couldn’t stop this from being an incredibly powerful show by one of the most original performers of our time.