On stage in Japan 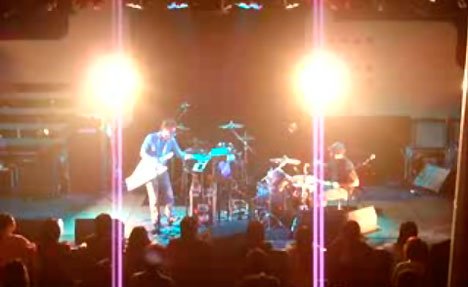 I think the best way of thinking about this is by first explaining the basic facts about our show:

And yet…we were told it was a great success. How? How can this be? Well, apparently Japanese crowds are not the crazy ones that we thought we were. Instead, they are very polite and while they didn’t make any noise at all for our set, as the night unfolded we watched every band come up against the very same wall of attentive silence. And yet…we were told that all the bands had played great and were well received. To be honest, after our trip to Beijing, where our audiences roared at us every time I threw down an ‘unh,’ I assumed the same culture would exist in Japan.

As for playing at 6:30, playing first and playing only for half an hour (which was almost excruciating for us considering how long some of our songs are), the place was full by the time we started and all the bands got equal (quiet) love from the crowd.

So, did we actually play well? You be the judge:

In the background of this whole trip has been our attempt at making a name for ourselves in Japan. Paul and I have this master plan about doing a Japan-China tour next year so that we can capitalize on the start we got in Beijing and build on all of the stuff we’re working on here in Tokyo. That translated into our show being crammed with industry people, all appraising the bands and considering which ones to invite back for the Big Japanese Superstar Show. Whether we did well enough remains to be seen…but ask us in a few months and we’ll have a better idea. Right now it’s party time.