The Orbit Room closes on College

Co-founded by Rush's Alex Lifeson, the venue is looking for a new home after 26 years on College 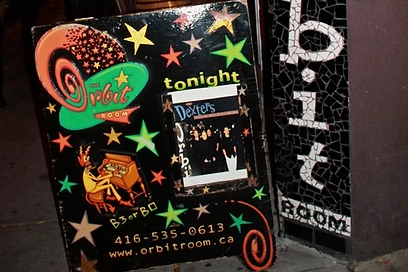 After two and a half decades on College, the Orbit Room will close for good.

“Dear fans of the Orbit Room and live music, it has been 4 months since all live music shows and venues were closed due to the pandemic,” writes owner Tim Notter. “It pains me to have to announce that the club at 580a College St will remain closed. This doesn’t mean that we are out of the live music business, it just means that our shows will no longer be at that address.”

The bar was co-founded by Notter and Rush guitarist Alex Lifeson in 1994. Though it was not in the zeitgeist in the same way as other heritage venues like the Horseshoe, it was a reliable live music mainstay.

According to Notter’s Facebook post, bands played there every night of the week for 22 of the last 25 years. It was a friendly stage, hosting everything from R&B to funk to jazz and rock and roll. Former Prince guitarist Donna Grantis recently shouted it out in NOW as a venue pivotal to her come-up. Guitarist and frequent Drake collaborator Adrian “X” Eccleston was also a regular.

Like Queen West mainstay The Beaver, which recently announced it won’t be opening post-pandemic, the Orbit Room blames the closure on the music scene’s uncertain future.

“Like everyone else, we will have to wait and see how the business reopens and what it will look like before we can make any plans for the future,” continues Notter on Facebook. “Apparently, the people that make those decisions have no idea what sort of timeline we are looking at.”

Toronto has yet to enter stage 3 of reopening like other parts of Ontario, but live music will be allowed. There will be a limit of 50 people indoors, not including performers, with singers and “players of brass or woodwind instruments” behind plexiglass. There must also be room for social distancing.

But for many in the live music business, there’s no way to make those kinds of concerts financially viable.

Another intimate venue, Array Space, is asking for help to keep its doors open. The Walnut Avenue space is a combination rehearsal space/recording studio/live music venue, and its been struggling since the start of the pandemic.

“Since mid-March, we’ve not earned any of the typical revenues we rely on from renting to artists – who themselves rely upon Array’s space for their livelihoods, community engagement, and artistic practices,” writes Arraymusic chair Mark Wilson in an email to supporters. “This means we’ve taken a big financial hit.

“There are so few places like The Array Space in Toronto – affordable, equipped, downtown, accessible, and livestream-capable – that give artists the opportunity to explore, rehearse, record and share their art. Losing Array’s Space would serve a tragic blow to this city’s wonderfully diverse, talented ‘community of many communities.'”

Wilson is pledging to match the first $3,000 dollars of donations. He says $6,000 is the start they need to start securing Array Space’s future. They plan to reopen in stages, he says, starting with livestreaming.

You can donate here.