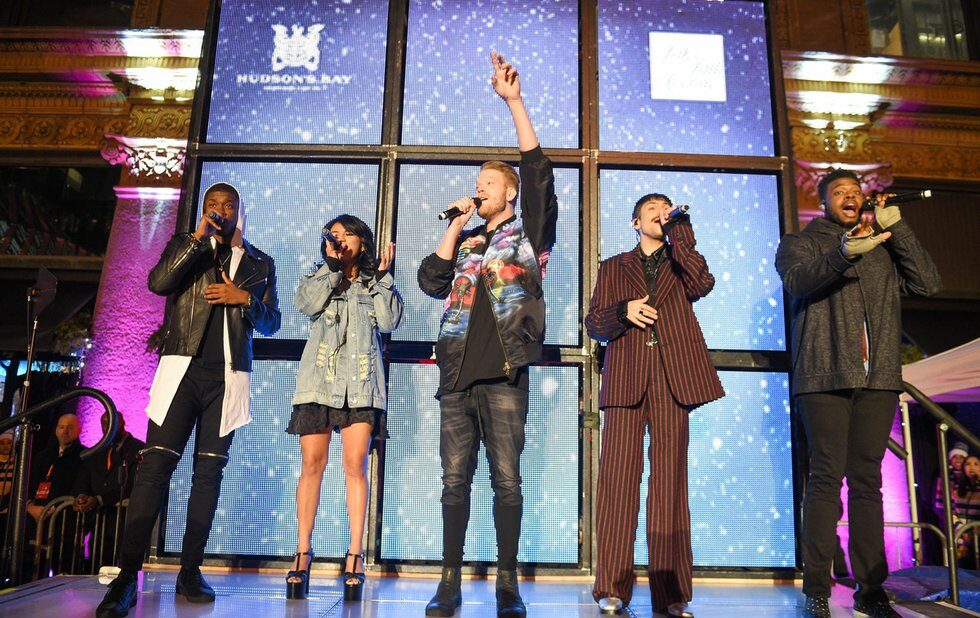 “So, what’s the demographic like for Pentatonix shows?” NOW’s music editor asked me as I was heading out the door.

Which is probably why I was the only one within NOW’s ranks who leapt at the chance to cover the group’s free outdoor set at Hudson’s Bay and Saks Fifth Avenue. I am neither a teen nor a mom, but my credentials on that last point are impeccable (I skipped my senior prom for regionals in Montreal, if that tells you anything).

Pentatonix are a five-piece a cappella group, and they’re a household name among the under-25 set, which will likely puzzle anyone who doesn’t spend a lot of time navigating the internet’s specific star system.

But the group, which got a leg up when they won a cappella reality show The Sing-Off in 2011, now has one of the biggest channels on YouTube their most popular video, a medley of Daft Punk songs (which actually netted them a Grammy in 2015), has 259 million views alone. They’ve managed to parlay that into, more or less, mainstream pop success – their 2016 tour featured a stop at the Air Canada Centre.

Winning The Sing-Off, of course, does not a pop juggernaut make, and in this post-Glee world, it takes an almost incomprehensible amount of lightning captured in a bottle to transform the inherently dorky boop-boops and jud juds of a cappella into something with mass market appeal.

Post Sing-Off win, they’ve cleverly courted YouTube-specific success, choosing tunes that resonate with a millennial audience, collaborating with platform stars like violinist Lindsey Stirling and flirting with more high-concept production that occasionally looks adorably DIY in hindsight. What do you wanna bet they were able to get everything for that Daft Punk video in one trip to Party City?

In short: It’s cheese, but really good cheese. But PTX’s largely young fans adore them without any apparent sense of irony, which you can attribute to a) life not beating all the joy out of them yet, and b) the band’s ability to leverage the cult of personality that comes with YouTube stardom.

Pentatonix front-dudes Scott Hoying and Mitch Grassi (who moonlight as electro-pop duo Superfruit) lean on that the hardest, hosting videos where they answer fan questions, do purposely corny Broadway versions of hip-hop songs and occasionally revel in the glorious secondhand embarassment of their old Sing-Off clips. It’s made Hoying and Grassi particular fan favourites with a viewership of kids perpetually hungry for relatable, accessible queer role models (or, alternately, people to ship).

Meanwhile, as Grassi, Hoying and mezzo-soprano Kirstin Maldonado branch out into solo projects, the main Pentatonix mothership has sleekened even further. A deluxe reissue of their album A Pentatonix Christmas – their third holiday release in just five years – dropped last month, and the group recently wrapped on a Christmas special. Much of their recent YouTube releases are solemn or sprightly takes on classic holiday carols, shot in desaturated tones, with the group singing against sweeping shots of natural backdrops.

In short, not only have they usurped Boyz II Men’s vacant aca-throne they’re out for Michael Buble’s tinsel-covered crown, too.

Which brings us to their appearance at Hudson’s Bay and Saks Fifth Avenue’s Queen Street flagship for the department store’s holiday window unveiling. The department store’s intricate seasonal displays have become something of a local tradition for years, but since the Bay’s acquisition of Saks, they’ve been splashing out for the holidays in ways befitting a luxury department store. For last year’s window unveiling, they flew in Mariah Carey, who more than upheld her end of the deal by performing All I Want For Christmas Is You and looking really fabulous.

Pentatonix were only slated to perform a couple of songs, but the crowd of mostly college-aged fans (my hunch about their demo was more or less correct) had been staking out their spots for as long as six hours. As showtime drew near, they killed time by singing along, in a quiet, breathy chorus, to the Top 40 mix (Vance Joy’s Riptide, Katy Perry’s Roar) on the speakers. I can only conclude that these are same kids that would have been at Dashboard shows 10 years ago.

They went ballistic when the City Hall clock struck seven, and eventually former eTalk host Tanya Kim appeared to introduce brief remarks from CEO Alison Coville and amp up the crowd with a chant of “PTX! PTX!”… only for the stage to remain empty for another 15 minutes. But the crowd bore the delay patiently and politely (after all, these are choir kids we’re dealing with).

They launched into an upbeat version of Hark The Herald Angels Sing, and the fans, of course, knew every lilt and harmony part, which the band, of course, nailed. One of the nice things about a cappella bands is that vocal quality is literally the only thing holding the show together, so you know they’re not gonna cut high notes, fall back on dancing, or – God forbid – lip-synch.

I was semi-dreading that they’d fulfill their obligations to HBC with two quick public-domain Christmas carols – but after they got the holiday stuff out of the way, they broke out their Michael Jackson medley to massive cheers. The lead vocalists tend to get the bulk of the attention, but it was sweet to see the fans respond with a wall of cheers to Olusola’s gentle falsetto verse in The Way You Make Me Feel, or newcomer Matt Sallee venturing a solo and an impressive hip shake (lest anybody miss former bass singer Avi Kaplan and his legendary body-roll dance moves).

They closed with the Daft Punk medley. I shouldn’t have been surprised – with those 259 million views, it’s the one people in the crowd are mathematically most likely to get hyped about – but I freaked out anyway. Grassi stomped his platforms to Harder, Better, Faster, Stronger, Maldonado replicated those floating, vulnerable Digital Love vocals, the crowd went nuts, Hoying took a panorama pic, and the show was over as quick as it started.

There were no gimmicks, no backup dancers – just the five of them singing, gesturing, reaching skyward, moving to the beat. Their vocals hold up for 90-minute sets, but on that tiny stage on Queen West, 15 minutes was all they needed to make a massive impression – and to send the fans, even the ones who waited for 20 times the length of the set to see them, home more than happy.