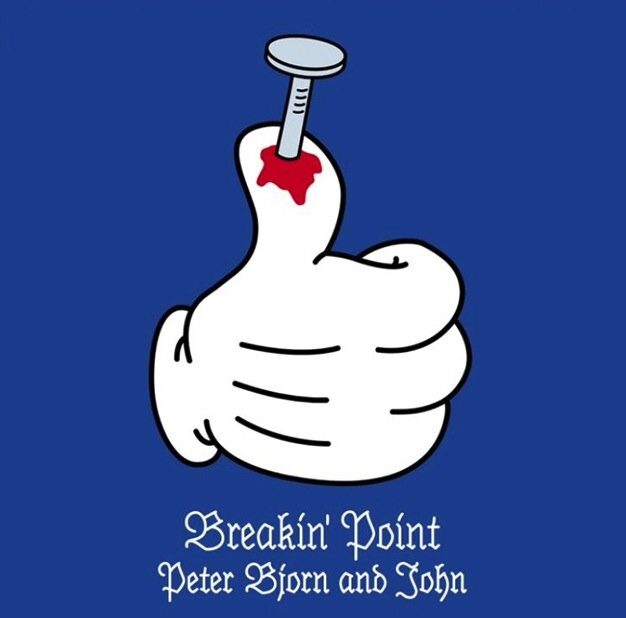 It’s been 10 years since Peter Bjorn and John released Writer’s Block, their breakthrough album, which included the four-and-a-half minute pop song Young Folks, with an unforgettable whistling intro. Every new album the Swedish trio has put out since then (Breakin’ Point is number four) gets discussed in the context of that one, or at worst that damn song. But can you blame us? Peter Bjorn and John have failed to capture that magic on any other record, though they do try hard here.

Breakin’ Point is full of big pop songs. The lead single, Dominos, is a high-energy twister with bouncy keyboards and drum machines that sound like handclaps, while another single-worthy track, Hard Sleep, features glistening synths, gang vocals and an ambitious climax that culminates with the lyrical cliché “I’m always able to see the fireworks in your eyes.” In contrast to 2011’s guitar-driven Gimme Some, here shimmering keys punctuate every song, and the result is very one-note. Thanks to a slew of big-time pop producers like Patrik Berger (Robyn, Icona Pop) and Paul Epworth (Florence and the Machine, Paul McCartney), Breakin’ Point is bright, crisp and suited for the charts.

Yes, all the songs are nice and pretty, but there’s something missing. It could be that in 2016 there’s palpable nostalgia for mid-2000s indie rock (see Wolf Parade reunion tour). But it’s the actual music from a decade ago that fans are yearning for, not necessarily the newest versions of the bands themselves. (See Spencer Krug half-joking that nobody wanted to hear Wolf Parade’s new songs at their last Lee’s Palace gig.) Same goes for Peter Bjorn and John. There will always be a wistfulness surrounding the trio because of how closely they’re associated with that golden era of indie rock. It’s no surprise that the album highlight, Between The Lines, is a sweet ditty that sounds completely 2006.

Top track: Between The Lines