Rumours have been flying about the fate. 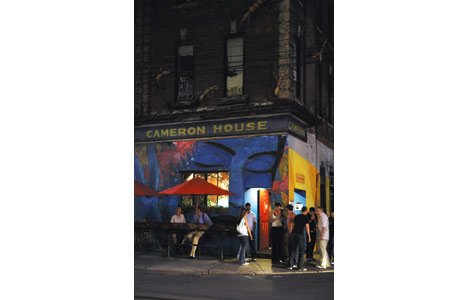 Rumours have been flying about the fate of the Cameron House since a listing for the legendary Queen West building appeared on realtor.ca last week. That’s right, for a little less than $3 million, you can own a piece of Toronto music history.

The end of an era is coming, but it’s not because of financial troubles.

“Honestly, it’s been a tough, gut-wrenching, six-year decision,” explains part-owner and manager Cindy Matthews. “It’s been 28 years, and we love the place. But it’s gotten to the point where our lives have moved on.

“[NOW Magazine] has been a big part of the Cameron since pretty much day one, and has been great a supporter over the years. It was always a labour of love and a lifestyle for everyone involved, but we just can’t do it forever.”

The building, which has been a bar and sometimes hotel for more than 80 years, became a key hangout and meeting spot for the Queen West art and music scene in the early 80s. Blue Rodeo cut their teeth there, Prince used to stop by to play the piano, cutting-edge theatre companies enjoyed long residencies, and countless hip Toronto bands have performed on its front and back stages.

But the impending sale doesn’t spell the last chapter in its life, at least not yet. Until someone ponies up the cash, the bar will remain open for regulars to pay their last respects. And it’s possible the future owner will preserve the iconic venue.

“It makes more economic sense to close the bar and sell it, but if that’s the way we ran the business, the Cameron wouldn’t be here in the first place. We just couldn’t do that to everyone who’s loved the bar and been part of it.

“We didn’t want to just disappear overnight like some other great Toronto institutions. We want people to know that although [the sale] is imminent, it could still take a long time.

“Ultimately, we’d love to hand over the reins to someone who wants to keep running it in the Cameron House tradition. I can’t see into the future, though, so I don’t know what’s going to happen.”

And how would she feel about someone turning the building into another fancy boutique hotel and club?

“I can’t feel guilty about anything that’s going to happen here, or that has happened. Change is good. Well, it’s not always good, but it’s always exciting.”