We were in the crowd when chaos broke out at the rapper’s Danforth Music Hall show after people threw drinks – and then punches. Here's what happened. 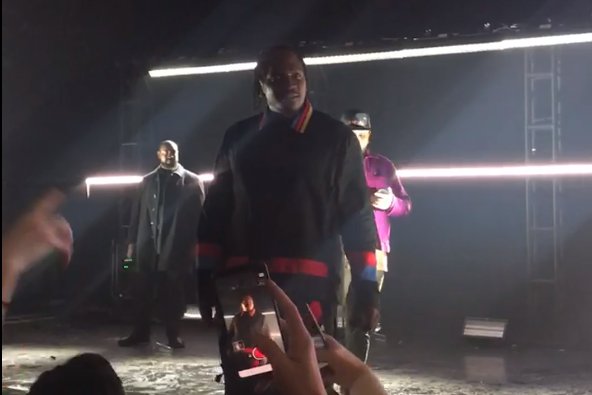 Update (November 21): One person was stabbed and at least five others were injured at the concert, Toronto police spokeswoman Katrina Arrogante said, CTV News reports. CP24 reports that person is in life-threatening condition. The person made it to the hospital on their own, according to the police, and was not one of the three with minor injuries initially reported to have been taken to hospital by ambulance.

Update #2 (November 21): Comedian Shaun Majumder’s show, which was initially scheduled for tonight at Danforth Music Hall, has been postponed to February 24. “Due to an ongoing police investigation, tonight’s show is being postponed,” writes promoter Live Nation in a press release. “All tickets will be honoured for new date.” “Oh no Toronto! Show tonight cancelled– Danforth Music Hall is a crime scene after stabbing at Pusha T show,” tweeted Majumder.

Pusha T’s concert at Danforth Music Hall was cut short on Tuesday night (November 20) after an onstage brawl caused the police to be called in.

The rapper performed for about 30 minutes before being drenched in beer thrown by people throughout the crowd. A few fans jumped onstage, which turned into a brawl with Pusha T’s entourage and venue security.

He returned to perform a few more songs before the show was cut off and fans were instructed to leave. Police swarmed Danforth and Broadview as Pusha T and his crew rushed out the front door of the venue, coincidentally speeding past an ambulance housing a concert-goer who seemed to bear the brunt of the incident. The police later shut down the whole intersection for about an hour. CP24 reported that three people were sent to hospital with minor injuries.

It was a violent and chaotic end to the Toronto stop of the rapper’s Daytona Tour. It was unclear whether the incident was unprovoked or arose out of an allegiance to hometown rapper Drake, who’s been in a public feud with Pusha T since the summer. Regardless, many people at the venue, including Pusha, seemed to think the OVO head was to blame for #BeerGate.

Pusha T was performing More Famous Than Rich, his collab with The-Dream, when huge splashes of beer started flying at the stage all at once. Some people jumped over the security barrier, and fights erupted both on the stage and directly in front of it. It wasn’t long before the stage was clear. At this point, many of the concert-goers chattered in scattered confusion. A few people tried to start “fuck Drake” chants that didn’t catch on.

After only a few minutes, Pusha made a triumphant return to the drenched stage, this time with his entourage in tow.

As his crew dispersed across the stage, it really felt like we were seeing a piece of hip-hop history unfolding before our eyes. Pusha’s return to stage was a cinematic rebuttal that he won’t be intimidated or pushed around by his peers. At the same time, with so many venues already reticent to book hip-hop shows, the behaviour of a few audience members could have unfortunate repercussions in the local music scene.

After the incident, Pusha T was clearly unscathed, contrary to what was initially speculated, but very clearly pissed off. He launched into Infrared, the standout song from his summer album Daytona that reignited his long-simmering beef with Drake. (“It was written like Nas, but it came from Quentin,” rapped Pusha T, referencing Quentin Miller, Drake’s alleged ghostwriter).

Naturally, this was the song that Pusha performed when he returned on stage after the scuffle.

If that wasn’t a clear enough implication that the incident was Drake-related, his post-song rant made it clearer.

“This nigga paid some niggas to throw beer,” he alleged. “What the fuck is that?”

“Y’all know where the fuck I’m from? You don’t even know,” he continued. (Drake hasn’t publically responded.)

Then, he told his DJ to play “gangsta shit” and launched into a fiery performance of I Don’t Like, which intensified the already tense crowd.

He finished with the song Mercy, which he had already performed less than 30 minutes before, but this time he was fuelled with even more venomous energy. As the crowd rapped the end of his verse (“She go wherever I go. Wherever we go, we go it pronto”) he made his way to centre stage.

“Toronto, I love y’all,” he said. “Yeah, I’m here. And it’s plenty of us. Plenty.” He then exited the stage, followed by the rest of his entourage.

With that, the DJ started packing up, the house lights came on, and it was clear that Pusha T would not be returning to the stage. Eventually, a voice over the PA announced to the few remaining stragglers that the concert was over.

NOW has reached out to the concert’s promoter, Embrace, for comment.