Gene, who constitutes half of genre-morphing cult heroes. 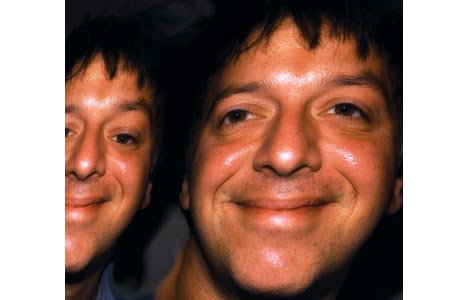 Gene, who constitutes half of genre-morphing cult heroes Ween, is currently flying solo with the blessing of his long-time partner in brain-melting music crimes, Dean. Gene, whose real name is Aaron Freeman, is taking Ween tunes on the road for some acoustic exposure when he arrives Friday (August 14) at the Horseshoe. From his home in Pennsylvania, Gene talks about jam bands, smoking 15 joints and weird looks his daughter gives him.

You’ve been playing with Dean (Mickey Melchiondo) for over 20 years. Why step out solo now?

Dean wanted to take a year off, which was all good and well, but I needed to keep working, so I decided to try this and all of sudden it became huge. Fans want Ween songs, and since I wrote a lot of them, I have no problem performing them [by myself]. I’m glad Dean did take a year off, because it kicked my ass into doing different things, which is great.

I hear your kids in the background. Are they Ween fans yet?

My 10-year-old daughter is just getting into Ween, and it’s ridiculous. I’ll be driving my car and we’ll put on Ween and she just stares at me. “Yeah, that’s me, that’s your dad.” I can’t explain the look on her face. She’s coming to grips with the fact that her dad is in one of the most bizarre bands.

Many associate Ween with drugs. Now that you’re older and have kids, has your perspective changed?

It’s kind of tough, because we have a legacy with that. People come out ready to party, and when Gene and Dean don’t drop acid or smoke 15 joints with them, they get a little bummed out. It’s like, dude, I’m 39. I’m not going to take acid with you.

When Phish covered Roses Are Free, your band got roped into the jam band scene. Is that still the case?

That’s dying down a bit. I made sure of that. Probably not the best career move, but I can’t hang with that. I like Trey [Anastasio] as a person, but as far as the music goes, all that jam band shit makes me want to puke. I’m just not that kind of dude, and I don’t think Mickey is either.

Gene ponders why music fans have changed in this decade.

Discussing Ween’s plans for the future.