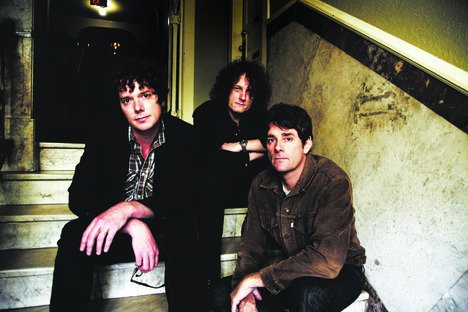 If you were a Canadian teenage girl in the early 90s, chances are the Grapes of Wrath made your knees weak. Chalk it up to the Vancouver band’s boingy, beautiful curls and jangly, Byrdsy folk pop, which MuchMusic spun in heavy rotation. Time to get out those autographed copies of Now And Again. Despite a not so nice breakup in 1992, the band’s original members – Kevin Kane and brothers Tom and Chris Cooper – are playing a handful of shows, including one at the Horseshoe Friday (November 19). Also catch Kane earlier that night at the Rivoli as part of the International Pop Overthrow Festival.

What prompted the original-member reunion?

Kevin Kane: I think it was pretty much an “I’ll do it if he does it” kind of thing.

Were there any ill feelings that needed airing?

Tom Hooper: If there were, everyone tried to be friendly and cooperative. All that happened in the past can’t be erased, but life is too short to hold grudges, especially in the case of the Grapes of Wrath. We had been friends since we were very young.

What have you enjoyed most about revisiting the old songs?

TH: Our old records. We’d stopped playing songs from the first album and EP. We didn’t like the sound, we’d evolved. But now I can hear our old punk roots, even though Kevin was mainly playing acoustic guitar. We had this great three-piece aggression, and you can hear the British new wave influence. It’s very charming, I think.

The 90s are big right now. Had you sensed a simmering interest?

TH: Yes. When you mention that your old band is the Grapes of Wrath, most people aged 35 to 50 tell you a story involving their ex-girlfriend and one of our songs, first date, small town. A lot of young people seem to know of us, too. I have two teenage sons, and some of their friends are fans.

What was it like having girls screaming for you?

TH: Fun, exciting, surreal. Who wouldn’t want to have girls screaming at your show and chasing you around town? But lots of music reviewers hated us at that point. We went from being media darlings to being portrayed as a lame teen pop band. The thing was, we were playing the same songs as always and getting a solid underground following in the U.S., and most of those fans were 20-something guys.

Are old-school fans coming out to the shows?

KK: Actually, there was a woman screaming after our Vancouver show, but she wore herself out a lot sooner than she would have back in the day.