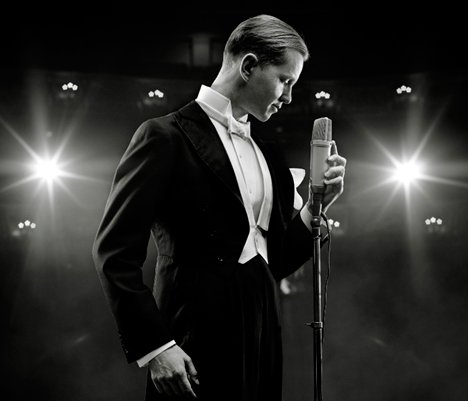 He’s respected in Europe for producing some grand re-enactments of 1920s and 30s German chansons, but is probably better known in North America for his oddball covers of modern pop songs in an early 20-century style. His high-flown musical recreations and witty stage appearances – always in tuxedo – have earned Raabe a cult following over the world.

He comes to the Royal Conservatory of Music this week for his first-ever Canadian concert on Tuesday (March 9) .

You’re last album was a solo effort. But you are touring with your band, Palast Orchester.

I have a solo program since 1994. So that means nothing. We will bring the whole orchestra to Toronto.

Have you ever been here before?

No this will be our first time. We are very curious about Toronto. We had our warm up in New York and it went very well. I think people in Toronto will appreciate us because, from my feelings, what we are doing is kind of timeless. The music and the humour is elegant and elegance is timeless.

But you’ve said that elegance doesn’t really exist in the modern world anymore.

Even in Berlin, we have some areas in which you can see very elegant people in restaurants and things. On the other hand you have parts where they are wild. Both exist. Sometimes in the same person – you can be elegant and very lazy.

But, believe me, elegance is not so important. It is nice to see an elegant person. But if there is nothing behind elegance then it means nothing, and I don’t give a shit. Forgive me for saying “shit.” My English is not great.

On your new album, you sing music from the 1930s and chose mainly Jewish composers that were exiled from Germany. Why?

These are pieces which we really liked, that is the main reason.

Every composer or songwriter I chose, his name always follows quality. After 1933 when Nazis came to power, you can’t find these names anymore. There’s something behind the composers – a story behind these names. Our favourite composers were forbidden after 33. So I have to do this now.

But we play these composers because of music.

You’ve chosen some bizarre pieces of music to cover. Like Britney Spears. What do you look for in music?

You have to know we are musicians and we are very often together in planes and hotel lobbies and in trains and buses and we often talk and we have crazy ideas and a few of them come on stage. So Ms. Spears, that was a joke. We did that eight years ago. That was funny for audience when we did it. It was funny becuase we finally we do a pop song. But it means nothing to our philosophy.

Ms. Spears could not find the humour and the subtext to this song. The song is not that bad, but we did it once and it was a joke. I don’t think we will perform this in Toronto.

I’m totally in love with this repetoire. It’s wonderful for a singer to sing these songs. I can do everything what I want. I’m my only music police.[rssbreak]

Max Raabe’s version of Oops…I Did It Again cover.