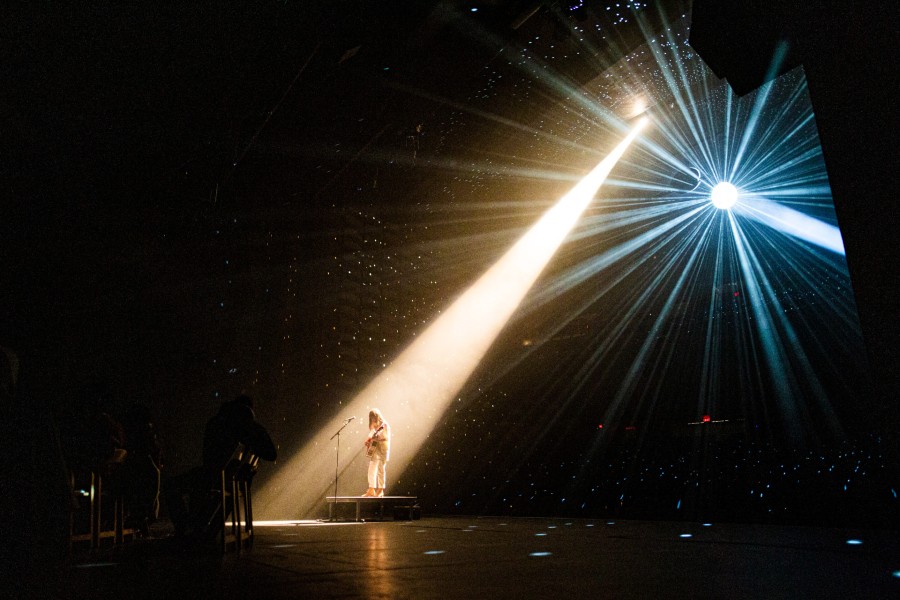 “Who would have thought we’d be beginning again?”

Leslie Feist asked that question to her audience a few songs into her new Multitudes stage show. She had just asked the same audience if it was anyone’s first concert since the start of the pandemic, and about a third of the 100 or so people cheered yes.

It was the second show on the first night of a 10-night stand at Meridian Hall. The L.A.-based Canadian singer/songwriter is playing two shows a night. That offers a ton of opportunities for fans in her former hometown of Toronto to catch the concert, and if it’s your first taste of post-lockdown live music it’s an excellent way to get your feet wet.

While music promoters and venue operators push for a return to full capacity, this strange, liminal early era of reopening offers a chance to rethink the live music experience. It’s a chance to experiment.

Feist does just that with Multitudes, a show that presents all-new music in a way that pokes and prods at the usual concert conventions. All the songs come from an upcoming album that is still a work-in-progress.

She played versions of the show in Hamburg and Ottawa, but the Toronto edition continues to live and breathe, changing slightly from night to night. Feist developed the production with lighting designer Rob Sinclair, who’s worked with Pet Shop Boys, Róisín Murphy, M.I.A., David Byrne and Tame Impala. Like the stage show Blindness, which heralded a return to indoor theatre in Toronto, it’s a performance conceived with the knowledge that it’s made in unusual circumstances.

You enter Meridian Hall through a usually unused side entrance into a lobby space where you can have a drink and mingle. Eventually, you’re led back out the same entrance (leaving many to quickly down their $13 beers or plastic cups of wine since they’re not allowed into the performance space) and led through a different door. After a glamorous march past a dumpster, you find yourself in a backstage area that seems deliberately less polished than the usual soft-seat theatre hall, a space with visible steel beams and strewn music gear.

Wooden chairs are set up in the round surrounding a little circular stage. At the late show last night, Feist entered with the lights still on and engaged in some light banter with the masked crowd. There was a lot of eye contact. (Judging by social media, in the earlier show she was already seated in the middle when the audience was ushered in.)

She started solo, strumming a sparse song on an acoustic guitar. Intentionally or not, that song, After After Party, felt like it was written for this moment. “When we get to the after party, we can all sing along to the song we’ve been listening to all along,” she sang. “It goes like this.” Then she triggered some previously recorded wordless vocals, a trick she used throughout the night. Eventually, a couple of bandmates (Todd Dahlhoff and Amir Yaghmai, from Julian Casablancas’s band the Voidz) joined, taking seats just off Feist’s slightly elevated platform.

Until the fourth song, it seemed like this was going to be a very no-frills performance, which probably would have still hit the mark. Feist has a gorgeous, evocative voice that is suited to intimate performances, but her stature usually means she’s performing at larger theatres that make it harder to connect on a personal level. Playing 20 small shows instead of one big one is one way to solve that.

Soon, though, the production kicked into high gear. Coinciding with a sudden rush of keys, violin and tracked vocals, the two black walls on either side of the stage revealed themselves as screens. Feist was projected on both, trailed and time-lapsed like an old Michel Gondry video.

Live cinematography and video manipulation is a hallmark of the rest of the show. There’s a notebook motif, with the screens often flipping through pages or revealing bits of handwritten lyrics. A camera operator circles the audience, projecting people’s shoes and jackets slung over their seats, cellphones waiting on laps.

Seeing fragments of yourself and your fellow audience members become a part of the show has an odd distanciation effect. It reminds you of your own role in the performance instead of losing yourself in it – something that runs contrary to the buzzword that’s attached to Multitudes and so many other pandemic-era arts experiences: “immersive.” Any show that involves masks and vaccination receipts will automatically carry a bit of strangeness, a reminder that we’re still living through a deadly pandemic and that communal experiences are not something to take for granted.

Multitudes was conceived when things were less open than they are now, but its baby-steps approach feels more comfortable than jumping straight from socially distanced patio dinners into a full-capacity Raptors game. Not everyone is ready for “back to normal” events right away, so why not play with the meaning of what normal is?

Feist joked about that throughout the show, laughing about how we have to teach ourselves how to applaud again. That became a running joke, with audience members clapping at inexact times.

It sometimes takes a reminder that the pandemic is not just a behavioural change – it’s a cataclysmic world event that has claimed the lives of millions. For Feist, it coincides with some personal grief and also happiness. She became a mother and lost her father, both big life changes that happened during a period of global change.

“I need to mourn better,” she said after a long moment of hush, launching into a spoken-word monologue about an impending storm.

For the grand finale, Feist ran behind the circular setup to a curtain string. She pulled it down, revealing a surprise that was sitting next to us all along: the majestic Meridian Hall auditorium. It turns out this “backstage” area was actually the stage and we’d been sitting on it the whole time.

She ran up and down the aisles, cheering in some form of “we made it!” victory. “These are ours again!” she yelled. Then she returned for a pseudo-encore, playing on a second microphone setup with her back to the empty seats and gorgeously illuminated by light refracting off a giant hanging disco ball.

Then she left the stage, leaving a long awkward pause as fans cheered for an expected return that never came. It’s true, $125 is a lot to pay for a one-hour show. But at least it’s a memorable one.

Concert Review culture Feist Music Things to do in Toronto