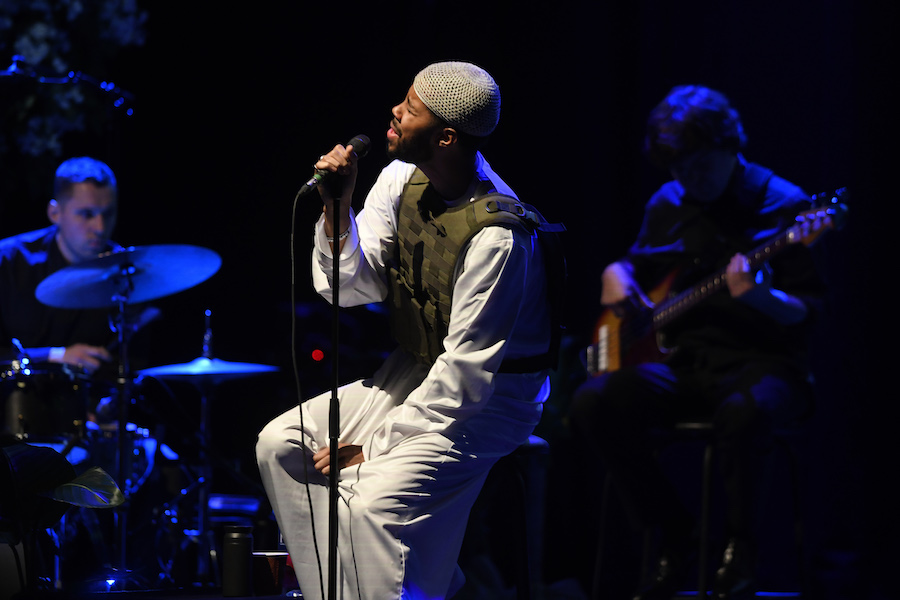 Not many Toronto artists get to play their first hometown headlining concert at Massey Hall.

For Mustafa, the location was even more significant than for most. It’s not just because the recently reopened venue is one of the most celebrated and historic music venues in the city – one that musicians tend to graduate to, not start off at – though that is a major accomplishment. It’s also a walk away from Regent Park, the Toronto neighbourhood that looms over all the songs on Mustafa’s debut album When Smoke Rises.

It’s a tender and mournful album, a loving and aching tribute to his fallen friends and the pain and joy of his surroundings. The crowd was full of Mustafa’s friends and family, including the families of Ali Rizeig and Smoke Dawg, both of whom are eulogized touchingly in Mustafa’s songs. He told the audience that having those folks in the audience was more overwhelming than the venue itself.

“Regent Park is in the crowd, man,” he announced.

But he has a complicated relationship with his city and his hood. Massey Hall is also across the street from the trauma centre at St. Michael’s Hospital, and Mustafa lamented how many of his neighbours know that building too well. “A lot of worlds ended in that building,” he said, and it’s a blessing to know that “we can gather together in a space like this just steps away from a space like that.”

It wasn’t an entirely celebratory achievement. Hours before the concert, Massey Hall instituted a no-bags policy, and there was extra security to get into the venue – not just a vaccination check, but a full emptying of the pockets and belt into a bin before going through a metal detector. Many people on Twitter wondered “was it like this last week for Gordon Lightfoot?” Having been at that show too, I can say it definitely was not.

“This show wasn’t even supposed to happen today,” Mustafa said after a couple of songs. “Toronto Police attempted to cancel the show, flagged it as a public safety risk.”

He spoke about how he attempted to shield himself from the “aesthetic of revenge,” how he used songwriting and poetry and storytelling as a way to crystallize a moment, to go on a journey through grief. But it isn’t always easy to find time or space to reflect or contemplate when your circumstances are inescapable, when the war your parents left is reflected in a different kind of war in the city they came to.

The show started with a screening of Mustafa’s short documentary from 2019, Remember Me, Toronto. It’s a video that unites people – including rappers Pressa, Jay Whiss, Puffy L’z and Drake – from different “priority neighbourhoods,” some at odds with each other, by reframing the issue of gun violence and showing the systemic pressures that lead them into it. Talking about how they want to be remembered, it takes the topic away from villainization, cold statistics, news headlines or sensationalized Instagram posts and humanizes the issue.

That set the tone for Mustafa’s appearance on the stage, which was covered in trees and candles. He was wearing a bulletproof vest, backwards and with the plates removed, over a white robe. There was a serious aura around him every time he opens his mouth. Mustafa’s voice was aching and delicate and fragile in all the right measures. He played nearly every song from When Smoke Rises, telling stories and sharing reflections on each of the songs and their themes. He may no longer go by “Mustafa The Poet,” but he hasn’t left his poetic side behind.

Songs like Stay Alive and Air Forces were given extra dimension with Mustafa’s generous explanations of his words. He talked about what happens when a parent lets a child go out into a world not meant for them, and the dual poison of the prison industrial complex vs. personal tragedy explored in Capo, a song named for a friend who was incarcerated at the time of its writing.

He was backed by Toronto jazz band BadBadNotGood – no strangers to that stage themselves – who provided the perfect understated accompaniment on the songs, full of delicate finger-picked guitar and stately keys, with a little more bounce to the rhythm section than on record. They were subtle throughout, but did get a chance to shine with a big guitar solo and drum moment at the climax of What About Heaven.

Mustafa moved to the keyboard for a solo performance of Ali, which he called the most naked song on the record. It was the most powerful moment of the night. Playing in front of the family of the late friend he was mourning, he broke down multiple times throughout the performance and was cheered on by the crowd to help get through it.

At the end of the show, he explained why he chose to make an album of folk music, joking about how it initially confused some of his friends. It was a natural occurrence, he said, as it was the genre most rooted in narrative and he writes stories. Some of his favourite musicians began as poets, including many who played on that very stage. Then he played a cover by one of its most famous performers – Neil Young’s My My, Hey Hey. The lyrics about burning out and fading away gained new resonance through Mustafa’s aching falsetto, and he altered a few of the lyrics to be about his friends in Regent Park.

This concert was about creating that space to mourn collectively. It was a heavy night, but also a beautiful one – emotional but never trite or maudlin, a philosophical, spiritual and poetic examination of what it actually means to grieve. It’s about pain and hurt and death, but also love and resilience and joy. There were even some big laughs.