Review: The Beaches rock a surprise homecoming show at the El Mocambo 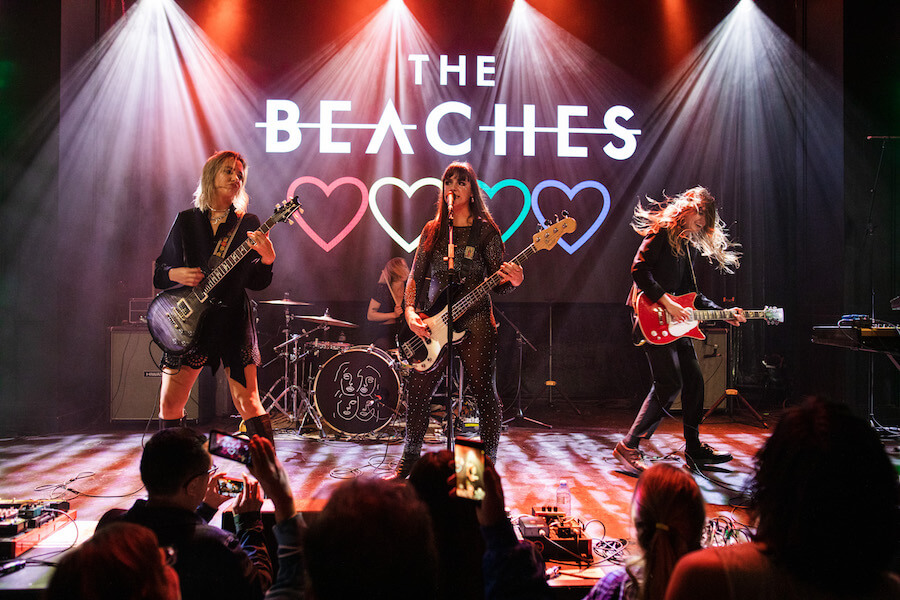 The Beaches at El Mocambo.

THE BEACHES with WHALE AND THE WOLF at the El Mocambo, Tuesday, November 9. Rating: NNNN

For the first time in seven years, the El Mocambo is a full-time venue again – and now it has a full-time weekly concert series.

Lemmon Stage is a new Tuesday night emerging artist showcase series, and it kicked off with a splashy surprise showcase by a homegrown band that’s a veteran of the historic Spadina venue: the Beaches.

The Toronto four-piece rock band have played just about every Canadian music industry and emerging artist event since they were teenagers, and it’s worked out for them – with heavy promotion from their major label Universal Music Canada and rock radio, it often seems like they’re everywhere. Other than Arkells, it’s hard to think of another Toronto band with so much industry push.

They’ve got a locked-in groove, fleshed out 70s glam style and well-practiced rock moves – plenty of synchronized jumps and drop-to-knees guitar solos. That came from constant touring and running the industry gauntlet, which included a long-ago stop on the Lemmon Stage. It wasn’t at the El Mo back then, but at a side-stage of the Warped Tour. Now, it’s got its permanent home in Toronto.

Hosted by longtime Toronto radio staple Alan Cross (currently of Edge 102 and Q107), the event has the vibe of the late Dave Bookman’s Tuesday Nu Music night at the Horseshoe – a friendly stage for up-and-coming bands to play and people to check out whether or not they know them. (But unlike the Horseshoe’s event, this show is $20, not free.)

That’s somewhat surprising for the El Mocambo, whose owner/frontman Michael Wekerle (there Tuesday night in a checked green Don Cherry-type suit) sunk a reported $30 million into renovations. Before it was set to open pre-pandemic, he turned a few heads by saying tickets for shows would be $100 to $1,000. Shows so far have been more in the realm of $20-$50, including some under a new partnership with the displaced folk and blues venue Hugh’s Room.

This concert, though, was a more exclusive start. The crowd was invite-only, so it was filled with both industry/media folks. There were also a good handful of contest winners too, and the lyric-mouthing superfans added some buzzing energy to the front of the stage.

The Beaches had a lot of energy to match. Their music is filled with catchy modern rock hooks sometimes reminiscent of Queens of the Stone Age, sometimes more like the Cars. Dressed in sparkly bodysuits and sunglasses indoors, they seemed right at home surrounded by photos of Blondie and the Rolling Stones, as well as the El Mo’s iconic neon palm sign sparkling away on each side of the stage.

The El Mo needed an upgrade in its final days before Wekerle bought it, but now it looks, sounds and feels very expensive. With its music memorabilia, photos and tickets reminding you at all times that legends like Patti Smith and Ronnie Hawkins played here – even a house Henderson lager festooned with neon palms – it sometimes veers to close to Hard Rock Cafe corporate nostalgia. But it also sounds amazing. You can’t get sound this crisp and immaculate at many other venues this size with a capacity around 300-400 people, and it did wonders for the Beaches.

The band seemed to be having a ton of fun, doing Adele impressions, feeding off the crowd and even playing a couple of new songs – like the bouncy Slow Mo – on the stage. They shouted out Lemmon Entertainment’s leader Jessica Lemmon and called her a bright light in the industry, especially for women.

Whale and The Wolf at El Mocambo

Opening band Whale and the Wolf said they were excited to be opening for the Beaches. Here from Edmonton, the band – dressed all in all black rock uniform, with Metallica t-shirts and leather jackets – had a bit more of a generic modern rock sound. The somewhat nasal lead vocals evoked bands like Cold War Kids and alt-j, and they crunched through some hooky tunes. It’s still a novelty to be back at a non-seated concert, and it felt like everyone from the band to the audience was enjoying the experience.

Whale and the Wolf will be back at the venue tonight (Wednesday, November 10) for an open-to-the-public Lemmon Stage event along with Sumo Cyco, Phoenix Laurén and Command Sisters. Tickets are $25 via Lemmon Stage. This show, along with all future Tuesday night shows, will be live-streamed at Lemmon Stage’s website.