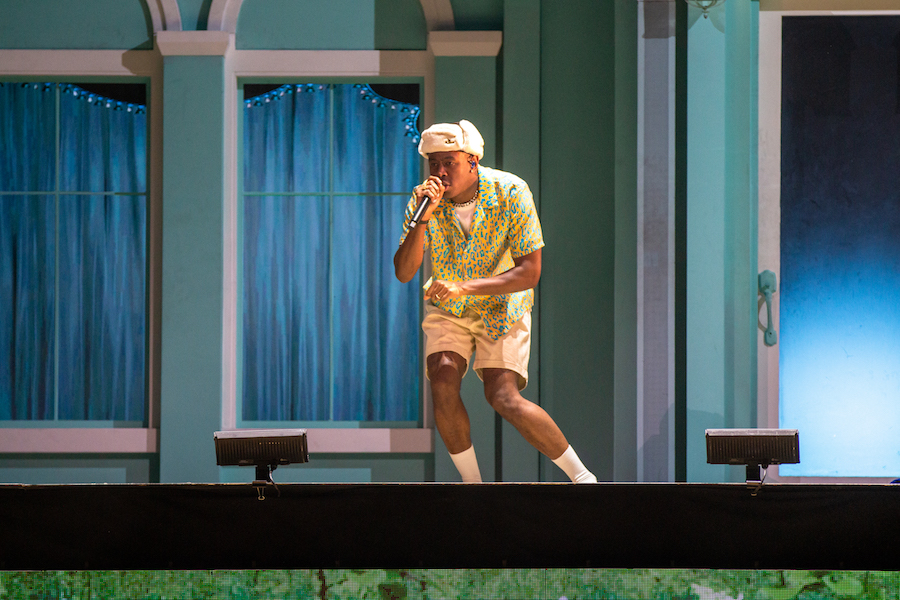 Arena concerts are back in Toronto – and Tyler, The Creator gets the art of the arena concert.

Lights, pyro, props, Broadway-worthy stage sets, a set of openers who would be worth shelling out for on their own – his show at Scotiabank Arena had all the big-stage spectacle we’ve been missing in the last two years. It was unapologetic opulence from a rapper who’s turned that into a self-conscious concept.

I wasn’t sure we’d be back here so soon. It was just last month that the Raptors were playing in this same arena for only a handful of friends and family and Drake. Friday night marked the second anniversary of the NBA’s 2020 shutdown and Tom Hanks announcing he had COVID-19 – the day many consider the start of the pandemic era.

It’s been a stop-start rollercoaster of restrictions since then, with the live music industry (like so many others) never able to settle into any rhythm for long. Even if arena concerts were allowed, not many big touring artists were able to commit to a show that might have limited capacity or the potential to be postponed multiple times.

Now that we’re back, it’s a treat to see an artist who so understands how to meet the occasion. Ascending from below the stage inside a 1939 Rolls Royce Wraith, Tyler emerged onto a stage dressed up as a mansion, painted the same turquoise colour as the car. (He drove here from Los Angeles, he said dubiously.) He ascended and descended the stairs, played on the balconies, and silhouettes filled the windows to join in on horns or guest verses. There were already pyrotechnics and fireworks by the second song.

Like on his last tour for 2019’s Igor, Tyler created a persona for 2021’s Call Me If You Get Lost: Tyler Baudelaire, a worldly and sophisticated alter-ego with an underlying subversive streak – similar to the French poet he’s named for, who was prosecuted for indecency. That plays with Tyler’s own shifting identity, starting as an angsty teenage shock-rapper in Odd Future, then embracing his queerness and becoming a genre-shifting Grammy-worthy rapper/producer/singer.

Tyler started with a set of songs from last year’s Call Me If You Get Lost, a return to 2000s-era rap after a pair of lovelorn pop-soul albums that signalled his ascent. Then he made his way from one side of the arena to a second greenery-covered stage on the other side by riding a boat through the crowd of general admission kids, many dressed like Tyler circa 2012. The audience on the floor became the waves, with many running alongside him to get closer to his perch.

Before segueing into a set of older tunes, Tyler remembered his first shows in Toronto in the early 2010s and the intense energy of those moshing, voice-box destroying performances. “I’m more refined now,” he said. “I realized I don’t have to say edgy shit just to keep people’s attention. I just have to be fucking amazing.”

He definitely gets it now. This was a well-structured show with all sorts of moods and registers to meet the evolving nature of his music. He still has that punk energy for bangers like Who Dat Boy, but he can also croon through songs like Flower Boy’s See You Again, he can dance, he can let the audience take over when he needs a break or when they need a chance to join their collective hype.

He can do crowdwork like an expert comedian, pointing out individual audience members and playfully ribbing them about their looks and actions – a tough dude keeping his arms crossed in a “pretty orange hoodie,” a “sweaty Shaun White-looking motherfucker,” a girl who brought him a cheese danish he absolutely wasn’t going to eat. He said he loved Toronto’s energy despite the snowstorm he travelled through to get to the venue. “God is a dick for doing this to you,” he joked.

Occasionally he gave audiences a glimpse at the meticulous artistry behind the songs by explaining the production tricks he used to make them, even if he knows playing live is more about energy and pageantry. Towards the end, he played Igor’s New Magic Wand, which he called his favourite among the songs he’s made, but acknowledged that without the layered voices it would sound like him just screaming badly for four minutes. He sold it short. The passionate performance was one of the highlights of the night. As the night ended, he grabbed his bag and walked through the house’s front door.

Before Tyler hit the stage, the crowd was already hyped from opener Kali Uchis.

Sometimes it’s hard to get a gauge on someone’s profile before you see them in front of an audience, and I had no idea how wild people would go for the Colombian-American singer until I experienced it. Blending reggaeton, R&B, funk and pop and seamlessly switching languages, she seemed ready to headline an arena on her own. With four dancers dressed in red flanking her, she commanded the stage and received rapturous screams with every gyration or hip shake.

Teezo Touchdown and Vince Staples started the show. Staples has one of the strongest catalogues in hip-hop right now, and the Long Beach rapper showed it off in his generous early set. He’s got bar-filled bangers like Norf Norf and vibier tracks, like 2021’s Law of Averages (one of my dark-horse picks for song of the year last year). But Toronto can be tough for opening acts, especially at big arena shows, and his lengthy performance dipped the building’s energy at times. His no-frills staging also suffered in comparison to the later big-event feel of Uchis and Tyler.

Still, Staples has the capacity for a classic album like Tyler’s Flower Boy, and when that comes he will absolutely be worth seeing back here on his own. Hopefully arena concerts will still be on the table when that happens.