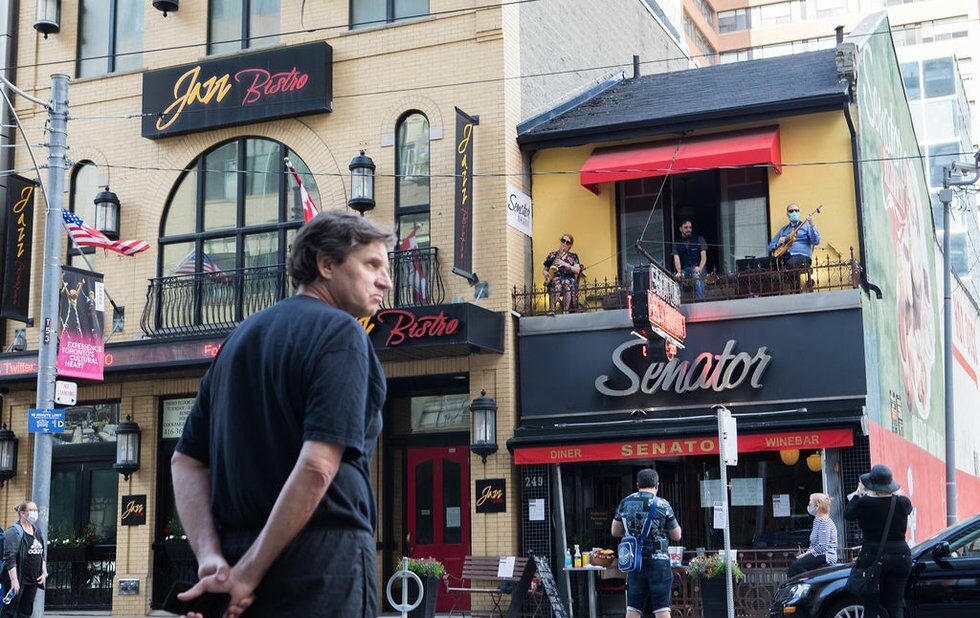 Restaurants are reopening in outdoor spaces all over Toronto as the city enters stage two of reopening, but it’s still going to be a Footloose summer: singing and dancing is banned on patios.

The Senator, one of the city’s oldest restaurants, has found a workaround. Starting today (Friday, June 26), it’s launching a new live music series from its balcony. The Serenade From The Balcony will bring live jazz to Victoria Street every Friday from 4 to 6 pm. Local jazz musician Ori Dagan starts it off this afternoon, with Nathan Hiltz on guitar and Alison Young on saxophone.

The series is really for the neighbourhood, says operations manager Sybil Walker, noting the restaurant just delivered 1,500 muffins, cookies and brownies to frontline workers at nearby St. Michael’s Hospital.

“We were so missing our music program and seeing both the musicians and customers on a regular basis we tried to come up with a solution that would work for us and the neighbourhood as well,” she says. “We thought this would be a safe and entertaining way to re-engage with our neighbours, provide some entertainment and keep some musicians working.”

The restaurant will also have a selection of pastries, coffee, tea and lemonade, but since it’s for takeout and not sit-in it skirts the “no music” rules. No one should be leaning in to speak over each other while the music plays. And since the balcony is 25 feet off the ground, there’s more than enough social distance.

We won’t get traditional concerts back for a long while still, even during stage three, but it’s been months since we’ve experienced any sort of live music. For music fans, this is like water in the desert.