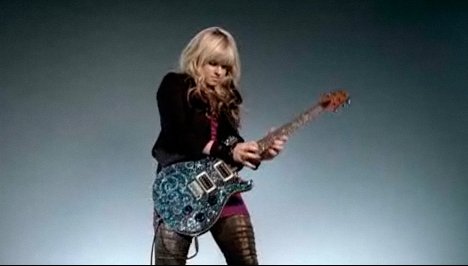 Orianthi Panagaris‘s new single, According to You, is highly commercial sounding and a bit lazy in concealing its direct mimicry of Kelly Clarkson. But for about 20 seconds near the song’s end, something unexpected happens.

It’s an incongruous yet shredding guitar solo by the 24-year-old Australian musician with blonde bangs. The kind of solo that puts guys like Steve Vai on the cover of Guitar Player magazine – acrobatic, squealing though for the most part soulless.

Regardless, she definitely makes her presence felt.

In fact, she has her fingerprint on mainstream music as well, thanks to some very high profile gigs as a session player.

She practically stole the spotlight, a very unlikely feat for a session guitarist, when supporting Carrie Underwood at the Grammy awards.

And then there’s that little indie doc that came a few months ago called This Is It. Orianthi was tapped to work Michael Jackson’s London shows she was going to do that leaning back-on-back move with him with smoke and fanning wind, just the way he did with Steve Stevens and Jennifer Batten.

But it wasn’t meant to be, and now she’s pushing her own solo career, except not as a guitar virtuoso, but as a teen pop princess.

Her major label debut album, Believe, which had its release delayed to coincide with the film, isn’t necessarily downplaying her guitar prowess, but neither does it put it forefront. Not till the second last song is there a real fretboard workout, an instrumental called Highly Strung that comes off weirdly dispassionate.

Though you can’t blame her for not wanting to make a strictly guitar players’ album – like Joe Satriani’s Surfing with the Alien or most of Santana’s catalogue – those are usually deadly dull affairs.

Then again, so are the overproduced, radio-ready songs that infect much of Believe, so you can pick your poison.

It’s likely, with her dazzling speed and agility, Orianthi is supposed to appeal to the Guitar Hero generation, and not stoned out classic rockers.

If she is the next paradigm of a guitar god(dess), and as Jackson’s choice she joins an old guard club of elites like Eddie Van Halen, Santana and Slash, we would have to consider she is, then she did not assume her position with Believe. [rssbreak]