The Nashville singer/songwriter and her band are embarking on a five-city 8-bit music video tour, and you can find the Toronto stop below 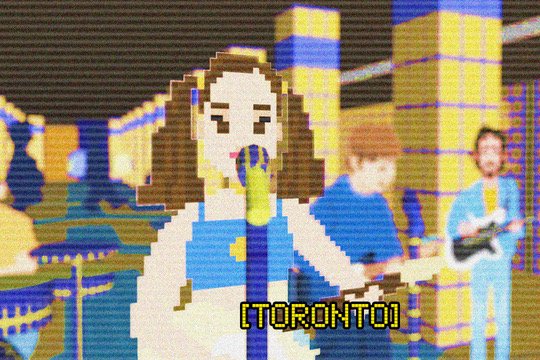 Soccer Mommy didn’t get to play Toronto’s Phoenix Concert Theatre last month as planned, but Sophie Allison has found a way to get to the city anyway. The singer/songwriter today embarks on an 8-bit music video tour, with vintage video game-inspired videos at a handful of specific locations in five different cities.

The Toronto video, premiering below, finds 8-bit Allison and her band playing a virtual arcade version of the abandoned (now extra abandoned) Lower Bay Station. She plays her song Crawling In My Skin while Pac Man ghosts fly around behind her. Slightly different from the city’s last Lower Bay Station show – and fewer permits were needed to make it happen.

It would have been easy to place the Nashville band in front of the CN Tower and say “look, Toronto” but video director Bella Clark wanted to go past the usual tourist locations in each city. “We actually started this series with Toronto – we wanted to find something offbeat, something spooky,” she says. “Lower Bay Station is an abandoned subway station that’s supposedly haunted, and people only got to visit it for a short window of time forever ago. So this is almost like getting to see inside.”

The 8-bit aesthetic was inspired by Allison, who’s merging video games and music much like many other musicians right now. “Quarantine for me has basically consisted of playing video games on my Gameboy, watching Firefly and Buffy, cooking with my roommates and writing and recording demos,” she tells NOW.

But, at least virtually, she’s still on tour.

The virtual merch table for the show is Sonic Boom (which has made its own foray into the online world), where you can buy Soccer Mommy’s 2020 album Color Theory on vinyl.