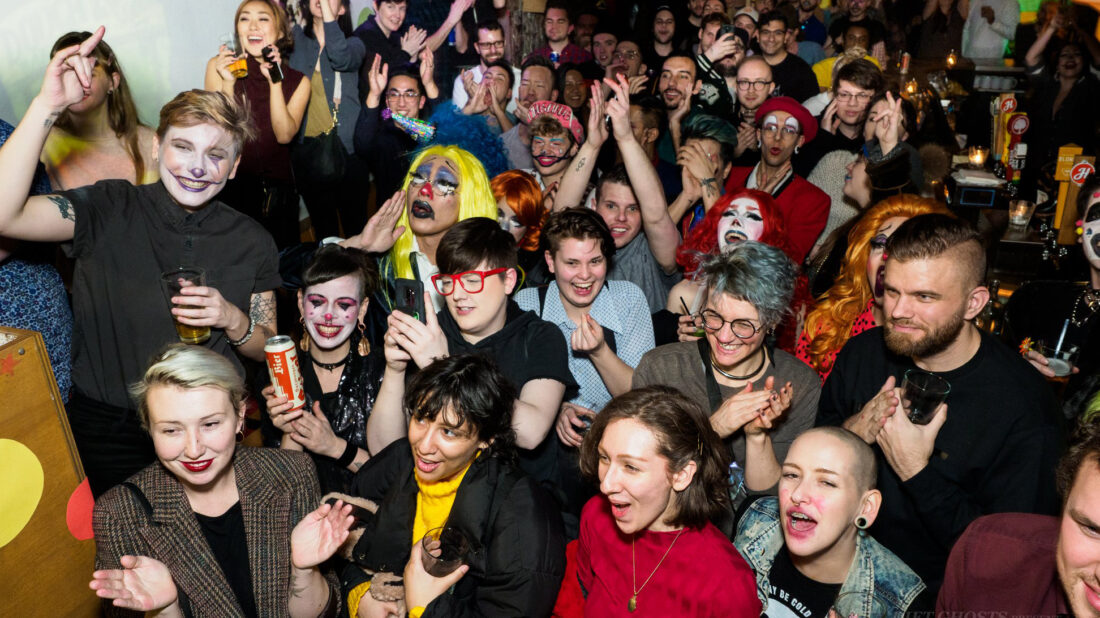 Photo by Ramy Arida at The Diet Ghosts: Clown Korporate

Long-running queer bar the Beaver is the latest local business to fall victim to the coronavirus pandemic.

In a statement posted on the bar’s social media channels on Saturday night, staff said the Beaver will not reopen in its current location but they hope to open elsewhere eventually.

“With a heavy heart + butt, The Beaver will not be re-opening at 1192 Queen West,” the statement reads. “We are looking for future spots that become available. All of the unemployed staff want The Beaver, or something like it, to continue. We hope if that happens, we will still have that magic. We have the staff, the crowd, and access to some funds to make it happen. A building is just a place.

“Realistically, a new venue is a faint hope for the future. If the right spot becomes available down the line, we will jump on it. In the meanwhile, we hope you can find a new place to keep doing what you do. When the world comes back, we will do a proper send-off to everyone.”

Founded in 2006 by late queer scene promoter and artist Will Munro and Lee’s Palace staffer Lynn MacNeil, the Beaver was part of a wave of LGBTQ establishments and parties to pop-up in the city’s west end in the late-00s.

Formerly a brunch spot – also called The Beaver – the bar quickly became an alternative nightspot for people looking for something different than what the Church-Wellesley Village had to offer.

“It’s just time,” MacNeil tells NOW of the decision not to reopen. “I was hoping to pass it on, but I think it’s too much for anyone to take on in this economic situation.”

While many restaurants and bars have opened patios, which is allowed under stage 2 of the province’s reopening plan, MacNeil says the Beaver’s outdoor and indoor spaces are too small to open safely during any stage of the pandemic.

Anyone who has danced at the Beaver has probably experienced being squished on the sweaty dance floor. That intimacy is part of the bar’s appeal but MacNeil doesn’t expect people will want to return to cramped spaces until a vaccine is found.

While many small business owners in Toronto have reported having issues with landlords during the pandemic, MacNeil adds the Beaver’s landlords “have been fantastic.”

MacNeil says he is supportive of staffers that want to reopen elsewhere.

“The staff and promoters are down to reopen,” co-manager Adam Cowan says. “If there is a larger capacity venue available down the line, it would be a disservice not to do so. We are in a great position for it to be turn-key as soon as it gets going. The old location is just a place. A tiny, musky place. I can imagine how amazing a new location with proper sound, stages, and the like would be for our community.”

When the Beaver opened, the strip of Queen West between Dovercourt and Dufferin had yet to become condo-fied. In recent years, the bar became more of a destination than a local as regulars moved out of the area.

Despite the neighbourhood changes, the Beaver was “doing fine” up until the pandemic, says MacNeil.

Cowan says nine staffers and “dozens upon dozens of the amazing drag queens and DJs that give us our magic” have been impacted by the closure.

Famous customers at the Beaver over the years have included filmmaker John Waters, the band Hercules and Love Affair, LCD Soundsystem’s James Murphy and Drake. After Munro died in 2010, MacNeil continued overseeing the business and the bar continued hosting dance parties (full disclosure: I DJed there regularly over the years).

More recently, it became a hub for drag performers.

“[Will Munro] got the queers to venture outside of the Village,” says Cowan. “They made space for all genders and orientations, and it’s hard to imagine what the city would have ended up being like without his influence.”

“It was the first gay bar west of Yonge Street in a long, long time and it’s the last one standing,” says MacNeil. “It did achieve that mix or art, music and street culture and the vibrant and vivid expression of sexuality across the board. That has not gone away – it’s firmly entrenched in queer culture now. It will resurface again in some form as soon as it’s possible to because the spirit is resilient.”