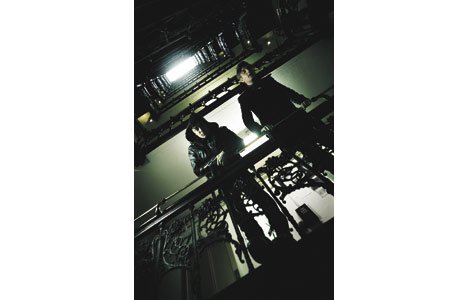 While a majority of the positively glowing reviews for the Big Pink’s debut, A Brief History Of Love (4AD), have equated the duo with said gaze pioneers, guitarist/vocalist Robbie Furze isn’t keen on those comparisons. In fact, he sounds flat-out sick of hearing them.

“Shoegaze is passive. We’re not like that,” says Furze from L.A. “With something like My Bloody Valentine, it’s all far back with the vocals in the mix. We’re more upfront. Our music is more reminiscent of early-90s guitar bands like Sonic Youth, Dinosaur Jr., early Smashing Pumpkins and stuff.”

Otherwise, Furze, along with co-conspirator Milo Cordell, has little to complain about these days. Critics are all over A Brief History – one British daily declared it a modern masterpiece – and dates are selling out all over on their current North American trek.

“We started with such low expectations, it’s been incredible,” he sighs. “Right now I’m sitting in the back of an amazing tour bus on my first tour of the States. It’s just ridiculous.”

It started at illegal squat shows last millennium when the pair first met as they checked out the newest digital hardcore groups. Furze would later go on to play for that genre’s kingpin, Alec Empire, while Cordell eventually formed Merok Records. Despite a brief stint putting out noise EPs together under the name Hate Channel, Furze and Cordell didn’t collaborate musically until 07.

Cordell’s Merok label might be familiar to some in Toronto’s electronic scene, at least to fans of local electro-noise duo Crystal Castles. Cordell discovered the group through MySpace and released their debut 7-inch single on Merok, which led to CC’s explosive popularity overseas.

“He’s good at finding music on the Internet,” says Furze. “He just loves it – spends his entire life on the Internet, MySpace. He loves the whole limitlessness of it. That’s how he found Crystal Castles. Me, I just check my hotmail once in a while.”