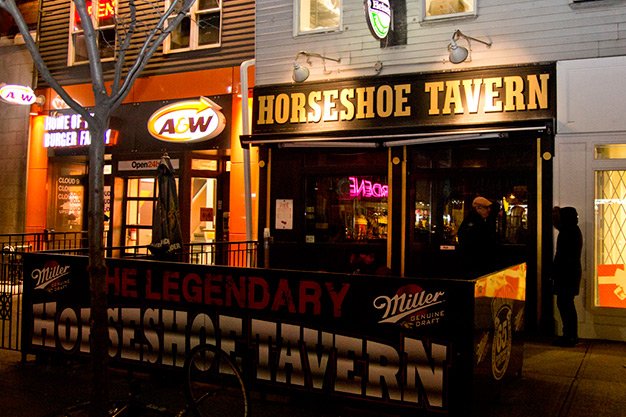 The Horseshoe Tavern is one of Toronto’s most famous live music venues, but until recently its back room concert venue has sat empty.

Instead, it has mostly operated as a watering hole, serving regulars and neighbourhood tipplers in the front bar and expanded CafeTO patio.

But soon, the Horseshoe will start hosting bands and audiences once again.

But unlike that virtual concert, this one will also have a live audience inside the venue. (Livestream tickets are $15, while reserved-seat venue tickets are $29.50-$39.50, available here.)

The show is billed as the first in-person concert at the Horseshoe in six months. In a phone interview with NOW, Horseshoe owner Jeff Cohen reveals the venue will “shake the rust off” with a trio of non-virtual, only-in-person concerts leading up to the UIC show.

Toronto band the ARC Sound starts it off on Friday, October 16. They’ll be followed the night after on October 17 by all-star CanRock Bruce Springsteen/Tom Petty/Neil Young cover band Tommy Youngsteen. Toronto indie-pop act Cat and the Queen will play a show on Wednesday, October 23. Ticket info is TBA.

“The old model no longer exists”

“We need to get in there and practice, because these shows are going to be different from what you’re used to at the Horseshoe,” says Cohen. “The Horseshoe’s old model no longer exists. The people who would be taking your tickets are going to be your hosts. You’ll be seated at a table instead of standing or dancing. And the bartenders will be going to you, you won’t be going to them.”

They’ll be following the stage 3 rules to the letter, says Cohen. Tables will be spaced at least six feet apart. Singers will be separated from the audience by plexiglass. Showgoers will required to wear masks unless eating or drinking, and they can only sit with people in their social bubble.

Toronto’s COVID-19 numbers are rising, but Cohen argues that following provincial guidelines ensures the venue is no less safe than indoor restaurants, which are able to get exemptions beyond the 50-person cap to run at 30 per cent capacity.

Cohen, one of the leaders of a loose coalition of local operators advocating for local music venues during the pandemic, has said that limiting a show to 50 fans isn’t financially viable for a music venue like the Horseshoe. He still believes that, and hopes to be permitted to go up to 30 per cent capacity instead (which would be up to 144 people), but has decided to get back into the concert business in the meantime.

“The CERB ends at end of October,” he says. “What are we gonna do with all our staff? At least we can give them a little bit of income. And we need to get our game ready for when the COVID numbers hopefully do go down and we’re able to operate at a higher capacity again.

“Some of these artists haven’t been working for six months, either, and their CERB is ending,” he continues. “We feel a moral responsibility to help the live music community here, to help some of these bands make some money.”

One hundred per cent of ticket sales of this and future livestream shows go to the musicians, he says, while the venue takes ticketing fees.

Moving forward, the venue will still be focusing on those virtual concerts, while the decision of whether or not to let fans in is up to the artists. Either way, you can watch concerts from the Horseshoe again – if not from the bar, then from your living room.

A previous version of this story said that the UIC livestream concert is happening on October 20 by mistake. The concert takes place on October 24.