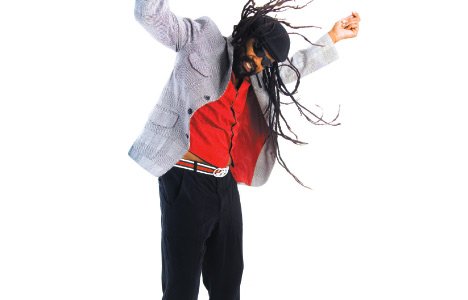 No matter what he does, whether he’s recording, producing, performing or running the Flames record label, Tony Rebel stays consistent about one thing. He keeps his eyes and ears attuned to ways of uniting his communities.

“The more things change, the more they stay the same,” he says, with more than a hint of introspection in his voice, speaking from his Kingston, Jamaica, studio. “Demographics and technology may change, but my message is constant: love, peace and unity to the family of humanity – especially the young people, as they are most vulnerable.”

Since he broke out in 1990, Rebel – an active deejay – has put 10 albums under his belt, but he’s best known for hits like Fresh Vegetable and If Jah (Is Standing By My Side). He pioneered the “singjay” technique, a combination of singing and toasting (rhyming) over a rhythm, a style adopted by the likes of Eek-a-Mouse, Yami Bolo and Sizzla.

With his sweet, comforting voice and ability to enunciate while delivering double-time rhymes, Rebel continues to influence modern reggae artists like Tarrus Riley and Queen Ifrica.

When he isn’t in the entertainment spotlight, he acts as a representative for Artists Against AIDS, works as head of the arts, culture and entertainment sector for the United Way and co-chairs the Committee for Community, a cultural rehabilitation service for disenfranchised Jamaicans.

He figured out his personal mission when he was very young.

“As a youth growing up [in Jamaica], you see the good, the bad and the ugly,” says Rebel, who appears at Harbourfront Friday. “From a young age, I always felt that there was a divine mandate for me to be the watchman of the city. From that initial stage, I felt like nothing could change me – even though I was tested.”

One of those tests came when Rebel embraced his Jamaican roots culture during the late-80s ragga era – a time when everyone was singing about guns, crime and the glorified gangster lifestyle. Violence is still a big deal in Jamaica. Last year, the island had the world’s fifth-highest murder rate. Now it’s dancehall artists who are glorifying the violence Rebel is looking to abolish. Yet he resists passing judgment.

“Aspects of it are unfortunate,” says Rebel of modern dancehall reggae, “because the lyrical content can place negativity in the minds of young people. But there are aspects that are creative and moving. It’s a constantly evolving genre, but I think we need to encourage dancehall’s stakeholders to make it more positive.”

It was this positivity that led Rebel to launch his own label in 1994, called Flames. When he figured out that he could spread his message more effectively if he had creative control over his releases and no major-label restrictions, he started his own imprint in a small basement.

“[Our artists] need the talent, the voice, the attitude and aptitude,” chuckles Rebel at his own ad lib. “They need to have a willingness to learn.”

Past performers at the festivities run the reggae gamut from Jimmy Cliff and Bunny Wailer to Damian, Stephen and Rita Marley and from Ini Kamoze to Inner Circle, and thousands of fans make the pilgrimage every year.

“One year we had a tribute to Garnett Silk it rained all night, and not one person left,” says Rebel, reflecting fondly on his deceased friend.

While Rebel’s message is powerful on its own, channelling it through like-minded artists has given it transcendent power. Working with Artists Against AIDS, a group of musical activists who came together through the inspiration of renowned calypso

singer Harry Belafonte, Rebel has used his music to educate listeners about safe sex practices in Jamaica and beyond.

“The point is to educate the people of the Caribbean and the world about AIDS through music,” says Rebel. “Artists Against AIDS just put out a track called Protect And Prepare, featuring about 15 artists, including Beenie Man, Elephant Man and Morgan Heritage.”

In addition to organizing seminars with UNICEF and Jamaica’s Ministry of Health, Rebel, alongside AAA, encourages prominent reggae figures to promote AIDS awareness. Many Jamaicans are reluctant to get tested, in part due to the stigmatization of homosexuality, a problem that often results in violence and even death.

“For quite some time I have sat around the table with other artists trying to deal with this problem. People express themselves in unfortunate ways,” says Rebel of the anti-gay violence in parts of Jamaica. “We all have our own opinions, but we have to coexist whether we want to or not. It does not help that many of these people have grown up in a culture where homosexuality is against the law, so there’s that energy, too. Police are no different either they should know better, but again, they’ve grown up in that same culture. It needs to be taken to a constitutional level.”

Police corruption was one reason why Rebel began mediating between warring factions in Jamaican garrisons (gang-controlled slum areas), where the community’s level of trust in the police is very low.

“We have been to most communities in Jamaica to spread the message of anti-violence, and virtually all the schools,” says Rebel of his work with Committee for Community. “We would round up all the main players, the people who know when and where crimes are being committed. These people were one another’s enemies, and we still managed to come to a two-year-long peace agreement. In areas where hundreds of people die every six months, not one shot was fired during that time.”

What are you reading now?

Tell us about your label

Who should we be looking out for?