Some big concerts coming up this month, including Lizzo, the B-52's, Thom Yorke, Carly Rae Jepsen, Shawn Mendes and more 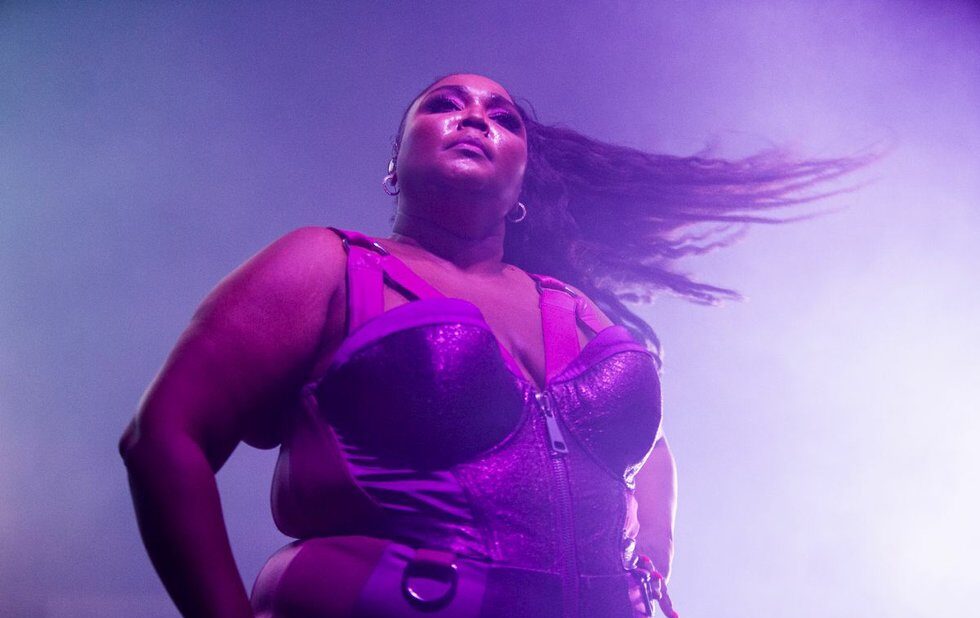 Sheer Mag: September 3 at Lee’s Palace: This Philadelphia power-pop band is dangerously good live. They’ll be bringing their punk politics, 70s hooks and big guitar solos to Lee’s, along with a new set of songs from their just-released album A Distant Call, which makes a case for survival in this late-capitalist hellscape. See listing.

Tyler, The Creator with Jaden Smith and Goldlink: September 6 at Scotiabank Arena: The last time the California rapper was in town he appeared atop a giant tree trunk in a magic forest set. Given the visuals his IGOR album prominently features bowl-cut wigs, we’re expecting another singular visual experience to complement his galvanizing stage presence and lovelorn lyrics as he plays his first Toronto arena show. See listing.

Shawn Mendes with Alessia Cara: September 6 at Rogers Centre: Expect some heavy volume emanating from the audience as the Toronto-based pop heartthrob plays his first local stadium concert. On this tour, Mendes has been reworking his live show – which we caught at the Mod Club last year – as an anthemtic pop-rocker who is comfortable switching between piano and acoustic and electric guitars. See listing.

Mattyfest: September 7 at Echo Beach: Celebrity chef and professional TV shouter Matty Matheson is coming back to Toronto to soon open a new restaurant, and his first act is throwing this hometown food and music festival on a much larger scale than the old Parts and Labour version. The punk and hip-hop-centric lineup includes the Wu-Tang Clan (yes, all of them), Descendents, Gogol Bordello, Danny Brown, METZ, Jennifer Castle and more. The food’s not bad either. See listing.

Kacey Musgraves with Poolside: September 9 at the Sony Centre: The country star is back for the second leg of her tour surrounding her big breakout album Golden Hour (now crowned album of the year at the Grammys). If it’s anything like the NNNNN-show she did at Danforth Music Hall at the beginning of the year, we’re in for a sparkly, cosmic, country disco extravaganza. See listing.

Mary J. Blige and Nas: September 10 at Budweiser Stage: American R&B icon and go-for-broke vocalist Mary J. Blige blew the roof off Air Canada Centre in 2016 in the wake of a high-profile breakup. Three years later, she’s surrounded by a more upbeat media narrative thanks in part to her epic BET Awards Lifetime Achievement tribute in June. This is a co-headlining tour with rapper Nas, and the pair, who are celebrating 25th anniversary of respective landmark albums, open and close the show together. See listing.

Hot Chip with Holy Fuck: September 12 at the Phoenix Concert Theatre: The British pop group went full-on house-pop on their excellent seventh album, A Bath Full Of Ecstasy (which features production work by late French dance producer Philippe Zdar). On record, they are more polished than ever, adding a number of huge-sounding tunes to their sizeable catalogue of catchy hits. Not surprisingly, this show is sold out. See listing.

The B-52’s with OMD and Berlin: September 13 at Sony Centre: Kate Pierson, Cindy Wilson and Fred Schneider haven’t appeared on stage together in Toronto recently. So legendary new wavers the B-52’s are on your concert buck list, their 40th anniversary tour should be a priority. As part of the celebrations, the group is also publishing an “authorized history” in 2020 and participating in a documentary directed by Craig Johnson and executive produced by Fred Armisen. See listing.

Kensington Market Jazz Festival: September 13-15 at various venues in Kensington Market: Local hero Molly Johnson‘s doggedly DIY, neighbourhood-centric jazz fest is going into its fourth year with over 150 performances in 23 venues throughout Kensington Market. All shows are cash only at the door, though there are also some free busker shows. Highlights this year include Heather Bambrick, Lemon Bucket Orkestra, Lighthouse, Bangerz Brass, Tom Wilson’s Literary Recital and lots, lots more. Check out the full lineup on the festival’s website. See listing. 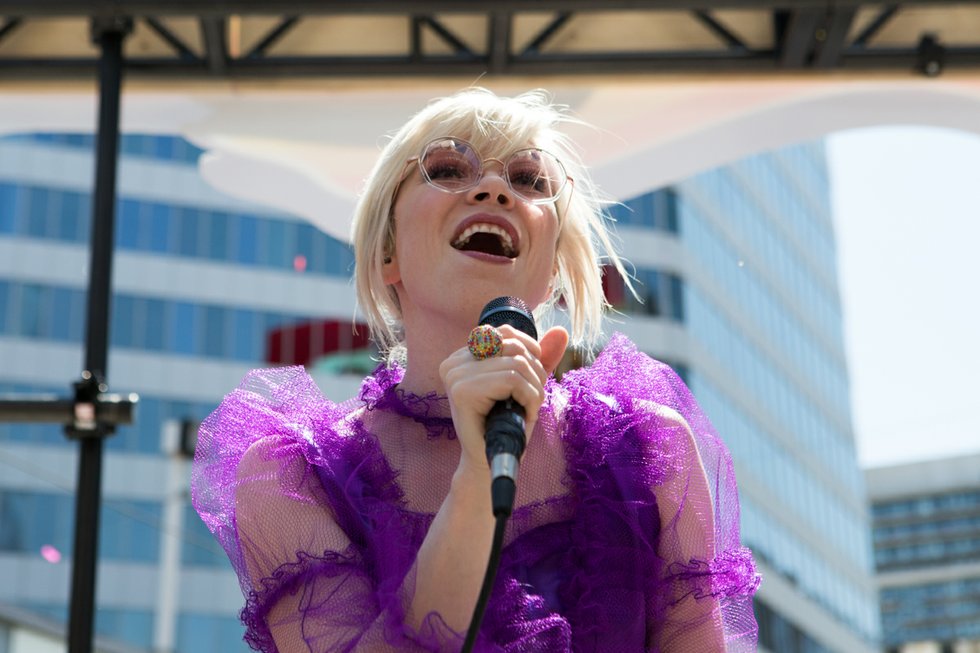 Carly Rae Jepsen sang on a float at this summer’s Pride parade. Now, she’s coming back for a headlining show at the Sony Centre.

Massive Attack: September 17 at the Sony Centre: It feels like we’ve been waiting forever – maybe because this concert was originally supposed to happen in March – but trip-hop heavyweights Massive Attack are finally bringing their 21st anniversary tour for their beloved Mezzanine album to Toronto. Robert “3D” Del Naja and Grant “Daddy G” Marshall are tastemakers in the realm of concert production, and Mezzanine XX1 promises “custom audio reconstructed from the original samples and influences, all-new visuals, collaborators Horace Andy and Cocteau Twins’ Liz Fraser on vocals and more. See listing.

Lizzo with Ari Lennox and DJ Sophia Eris: September 19 at Budweiser Stage: Lizzo has had an incredible breakout year since releasing this year’s Cuz I Love You and her ascent doesn’t seem to be stopping anytime soon. We caught her good-as-hell concert at the Danforth Music Hall back in May, and now she’s back at the bigger Budweiser Stage. Still, it seems like a small, intimate show compared to where she’s probably going next. See listing.

Venus Fest: September 20-22 at the Opera House: This festival that celebrates and provides space for women and non-binary artists is back for its third year with a strong three-day lineup that includes Montreal bilingual pop artist Charlotte Cardin, Scottish indie rock icons the Vaselines and Tei Shi, who’s brought some new material to debut. There’s also a stacked collection of locals, including songwriters the Weather Station, Fiver and Dorothea Paas, plus Filipina rapper Han Han, Inuk pop exploder Riit and Too Attached (the duo of Vivek Shraya and her sibling Shamik Bilgi). Venus Fest’s Aerin Fogel was on our recent panel about the state of Toronto’s DIY scene, which you should check out. See Venus Fest’s website.

Octo Octa and Eris Drew with Cam Lee: September 21 at Velvet Underground: Having played various after-hours situations in Toronto, DJ/producers (and real-life couple) behind the label l T4T LUV NRG bring their ecstatic house/rave anthems to a “proper” Toronto venue. Each has been riding a wave of buzz thanks to their psyched-out, genre-melding singles and have used the attention to celebrate and boost visibility for trans partnerships and love. See listing. 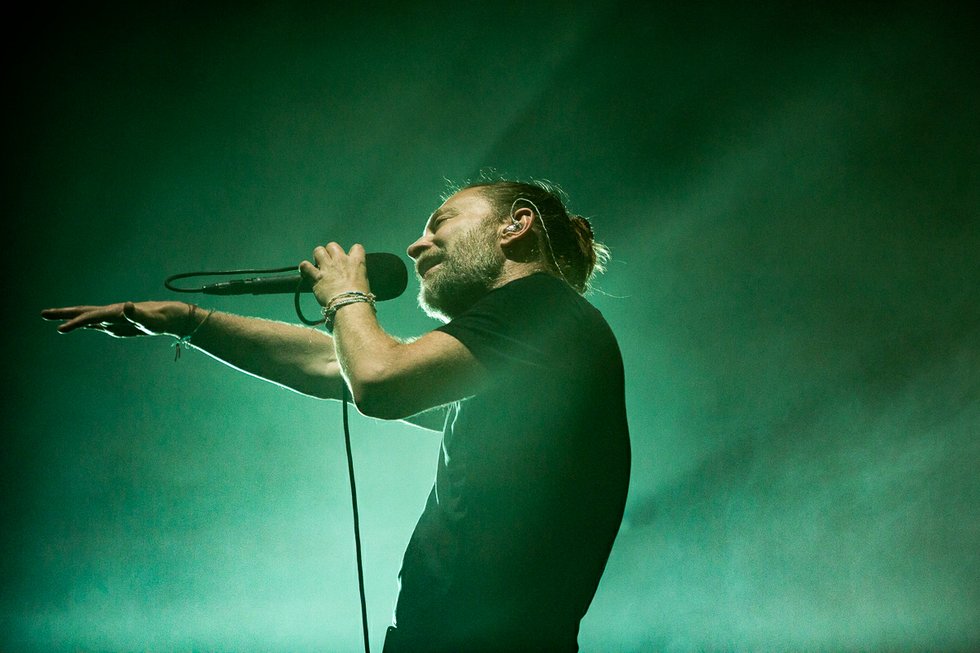 After returning to Toronto with Radiohead last year, Thom Yorke is coming back to Scotiabank Arena for a solo show.

Thom Yorke: September 27 at Scotiabank Arena: After making an emotional and bittersweet return to Toronto with Radiohead last year at Scotiabank Arena, Thom Yorke is coming back again with his latest solo project Anima. He’ll be bringing that (literally) dreamy work to life with his Tomorrow’s Modern Boxes band of Tarik Berri and longtime producer/right-hand man Nigel Godrich. See listing.

Nick Cave: September 28 at Convocation Hall: The Australian singer/songwriter graduated to arena status last time through town, but he’s scaling back down for this one – part of “Conversations With” tour in which he plays solo tunes (notice the lack of “& The Bad Seeds), tells stories and does Q&As. With its giant pipe organ (that hopefully isn’t off limits), U of T’s Con Hall could be the perfect venue. See listing.

Daniel Caesar with Charlotte Day Wilson and Koffee: September 28 and 29 at Budweiser Stage: The hometown soul star celebrated the release of his debut album Freudian with five consecutive sold-out shows at the Danforth Music Hall. He recently surprise-released his follow-up album, Case Study 01, and is once again doing a multi-night hometown stand, this time at Budweiser Stage. He’s firmly established now, so this run of shows won’t have the same graduation feel as the last, but it’s a good chance to see all the new songs in a live setting. See listing.

Young Thug and Machine Gun Kelly with Killy Strick: September 30 at Echo Beach: The singular and prolific Atlanta MC finally plays a proper show in Toronto – albeit a joint headliner with Machine Gun Kelly, who recently made the jump to acting in the Netflix movies Bird Box and The Dirt. Young Thug is currently riding a wave of good reviews around his So Much Fun album and though it’s taken him a while to play a headlining gig in Toronto, he arrives with a formidable catalogue to draw from. See listing.

Steve Lacy: September 30 at the Phoenix Concert Theatre: The Internet guitarist and rising fashion concern’s N Side was the sexy stoner slow jam of the summer, but it probably sounds just as good in early fall. Though he often plays solo material during the Internet’s concerts, his Apollo XXI tour marks his first proper headlining moment. See listing.

More shows on our radar