By Richard Trapunski and Kelsey Adams 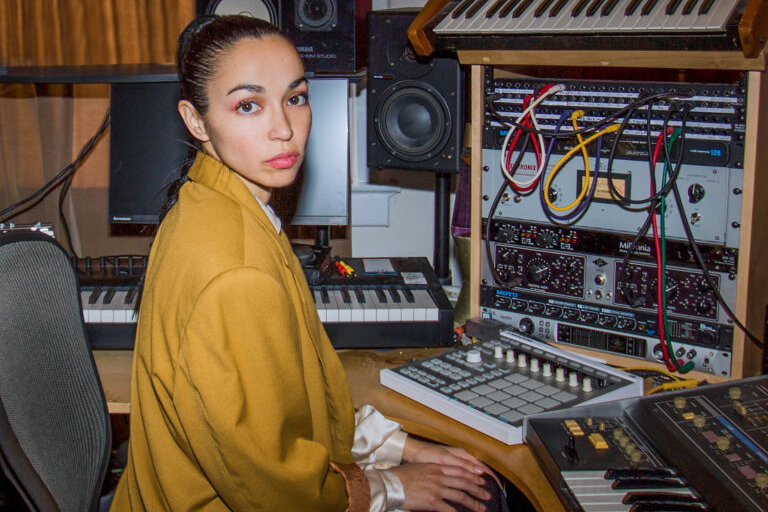 Winter is coming, and it’s out to be a looooong few months indoors. But at least there’s lots of good music to listen to from Toronto artists. So we’re bringing back our local music roundup, this time in a new monthly format.

We already previewed some of the albums we’d most been looking forward to this season here and we don’t want to repeat ourselves too much.

But today is Bandcamp Friday, meaning all royalties from albums bought at Bandcamp go straight to artists. So if you want some great records to buy today, try Teenanger, Luka Kuplowsky, Born Ruffians, METZ, OKAN, Gord Downie, Hiroki Tanaka, Robin Hatch, PUP and LAL. And go give all the albums a listen, on any streaming service.

Other than that, here’s what we’ve been listening to this month.

Last year I called MorMor Toronto’s new prince of melancholy. He has a distinct brand of wistful, contemplative songwriting, while his music flits from pop, R&B and post-punk to indie rock. On this track, he’s looking at the future expectantly, with renewed optimism despite what’s happening in the world. The sombre animated video sees a figure falling into a void repeatedly, going through monotonous routines ad infinitum and running away from or towards something.

He mentioned on Instagram that working on the track brought him solace during these uncertain times and hopes it serves listeners, as well.

Babygirl describe their sound as “pop songs with sad guitars” – to the point and quite fitting. On Easy, pop-inflected vocals similar to Clairo bop over unembellished guitar chords. The song is addressed to “Mr. Nonchalant” and expresses disdain for a particular kind of young millennial dating detachment, playing the game of who can care the least: “I love it when you treat me like you don’t even see me.” A perfect track to blast while dealing with the confusion of dating in the modern age.

Maylee Todd: No Other

The always-excellent Maylee Todd has been incubating in the Toronto indie scene (and her virtual womb) for around a decade now, and she’s been due for an explosion. Her signing to Stone’s Throw, the home to some of the best left-field hip-hop and pop out there, is a good sign. No Other is her first single on the label, and it’s vintage Maylee: a chill and soulful bit of laid-back electro-pop about some of the most timeless feelings in pop.

FKA twigs is not an easy artist to cover. Masterfully, Jozem’s rework of the UK musician’s 2013 breakout track, Water Me, replicates the sparse expanse of the original while bringing in his own sonic inflections. His sorrowful voice floats over the subdued production, as if it’s gliding over water. On Instagram he mentioned that it’s a rendition of a “forever obsession that haunted my dreams many moons ago.” His version will haunt mine for months to come.

This left-field duo of Enoch Ncube and David May often get compared to alternative hip-hop mega-group Brockhampton, and for good reason. This track is a perfect example of their singular sound: Unhinged rapping, weirdly pitched and distorted vocals, scuzzy guitar, piercing synths. It should be cacophony but it comes together seamlessly.

Although not the lead single on Waters’s recent EP, If It Comes Down To It, this track highlights the range in her voice. The singer/songwriter has steadily been making a name for herself over the past few years, playing live shows where her particular blend of crooning soul, bluesy edge and gritty rock comes to life magically. The way she wails the second chorus – “so innocent, so filthy/so innocent and so guilty” – is loaded with passion and inhibition. It’s clear her love interest is as cunning as a fox and she can’t help but be enrapt in his mischievous game.

Cybertronic Spree: Dare To Be Stupid

Who parodies the parody king? Here’s a band of Transformers covering a Weird Al cult classic that is in turn a style parody of DEVO (but not a straight-up parody of any specific song – still with me?). Then the video features a handful of Toronto Weird Als, paying homage to a handful of his iconic videos (all parodies themselves). And to close the circle, Weird Al himself shows up at the end to tell the band how stupid the whole thing is.

Catch Cybertronic Spree at a livestream from Velvet Underground on December 11. Tickets here.

Josiah Hughes and Sam Sutherland set themselves the impossible task of doing a podcast about all 155 Blink-182 songs. Then they released a bunch more. But today, finally, Blink-155 finished their journey with the 174th song, one of Blink’s most beloved songs: Dammit. The podcast has spawned a whole subculture of fan accounts, parody accounts, started a feud with Indie88, uncovered CanRock controversy and got guests from the lead singer of Imagine Dragons to Phil Elverum to Mark Hoppus himself. So they couldn’t go away quietly.

To celebrate the podcast’s end, they’ve put together a new Bandcamp Friday compilation of past guests covering Dammit – 28 of them, including local artists like Robin Hatch, Pretty Matty and PUP guitarist Steve Sladkowski. Listen to this pop-punk nugget in every style you can think of, from lo-fi Pavement to fingerpicked folk, electro-pop and more.

Toronto concerts to catch in November

The Lowest of the Low live from the Horseshoe, November 28. Tickets here.