NOW MagazineMusicToronto music predictions for 2021: when will concerts return? 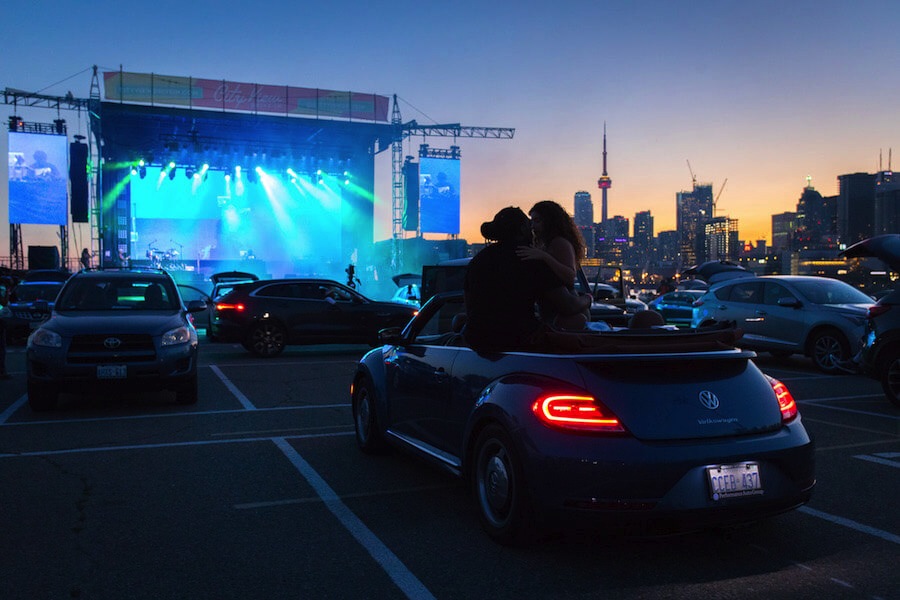 No one could have predicted what happened to music (and culture as a whole) in 2020, but looking back at my predictions column last year I actually came pretty close.

I didn’t know much about the coming pandemic or how it would cancel nearly all in-person live music for the majority of the year, but I did gesture towards a worsening vanishing venue crisis in Toronto and a shift to virtual concerts.

That’s not to say that I’m some sort of psychic or master astrologer. It’s just another example of an adage we’ve been hearing since COVID-19 transformed our lives: the pandemic didn’t just invent problems, but exposed those that have long existed. That’s as true in music as in any other field.

Unlike last year, this year’s predictions column comes with full awareness that it’s not business as usual. It’s still hard to say when or how we’ll see local music return to any sense of normalcy or whatever number new new new new normal we’re on. But there are some interesting trends already emerging.

When will concerts be back?

Here’s a common daydream for music fans during the pandemic: you’re back in your favourite venue, beer in hand, surrounded by friends, strangers and “show-friends,” everyone vibing to the same sounds at the same time in the same room.

So when will it finally happen?

That’s the big question hanging over everything this year. A week into 2021, Ontario is still under lockdown, music venues are all sitting empty and there’s no end in sight. Every few days we hit a new record of daily case counts.

There is a light at the end of the tunnel. The vaccine is already being rolled out, if frustratingly slowly, and there are projections that the majority of Canadians should be vaccinated by fall. So is that the return time?

A few big festivals have already announced headliners and dates, like Osheaga, which is supposedly set to bring Cardi B, the Foo Fighters and Post Malone to Montreal in late July and early August. California mega-fest Coachella is still holding its early April dates, too.

That time frame seems very ambitious for any concert at all, but for a festival that draws 40 or 50 thousand people a day it seems all but impossible. More likely, the big business concert ecosystem of major artists, booking agents and concert promoters are putting the wheels in motion for tour routing, sponsorships and grant funding. That could very easily turn into another round of cancellations and postponements. Only buy tickets if there’s a good payment plan, deferral or refund policy.

Concerts actually did return in Toronto, briefly. In the summer, when case counts were relatively low and things started to reopen, the province allowed live music with a max capacity of 50 indoors and 100 outdoors and safety measures like social distancing, masks and plenty of plexiglass.

If there are concerts this year, this is what they’ll be like to start, even once more people get the vaccine. Ryerson has been working with people in the live events business to keep track of best practices and regulations so they can hit the ground running once concerts are allowed to return.

That #Lights-On guide offers a pretty good snapshot of what 2021 concerts will probably look like: frequent and visible disinfecting, timed entries and exits, distanced seat clusters, stripped-down productions, short sets and plenty of masks. You might even have to provide proof of vaccination.

Everything becomes easier and safer if you can do it outdoors, so expect to see many more live music experiments once summer comes around – probably some outdoor raves, too.

The first shows will be mostly local or Canadian artists as it will likely remain hard for big international musicians to travel and tour. That’s if the border is even open. 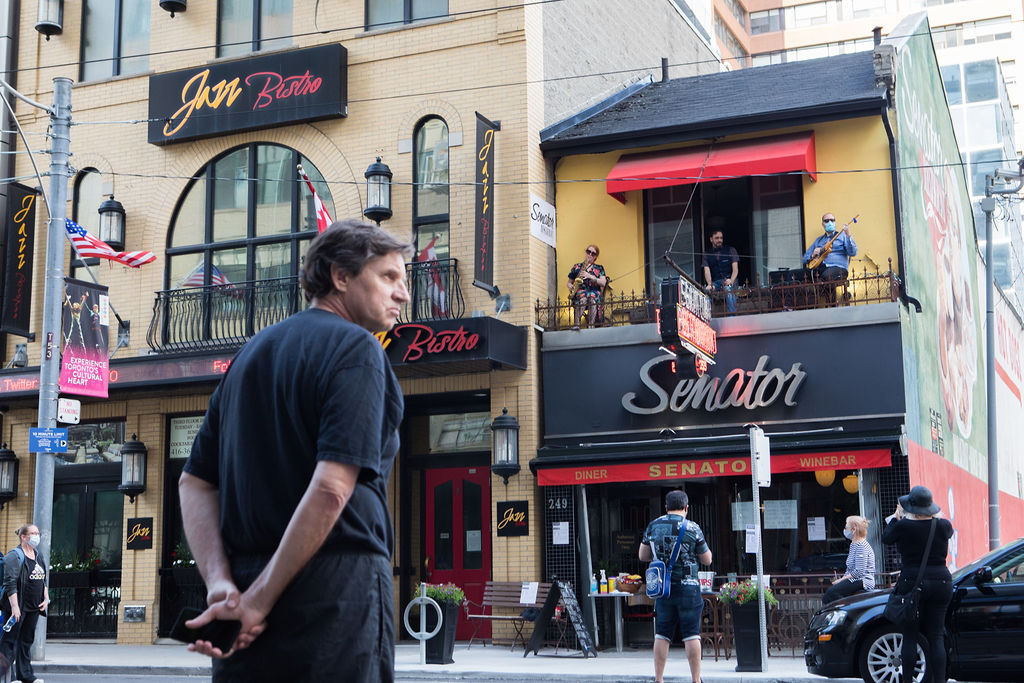 The Senator restaurant works around pandemic restrictions by hosting a balcony jazz live music series in June and July 2020.

Like a lot of people, I’ve had a love-hate relationship with livestream concerts over the last year. Some sort of live music is better than no live music, but they can’t help but remind me of the visceral in-person shows that I’m missing. It feels flat in comparison.

The best ones have been the ones that play into the specific medium they’re presented on and don’t try to replicate the exact concert experience you’d get inside a venue. Some have happened inside video games, others, like PUP’s show at Sneaky Dee’s, leaned into the absurdity of the whole endeavour. There are specific production tricks you can use; you can treat it like a variety show or a TV production. There’s a lot of potential there, and only some of it has been tapped so far.

The quality of livestream production increased exponentially between March and December. Many Toronto venues have outfitted themselves with sound and camera equipment that can produce high-quality broadcasts. Even though they’re closed, some of our favourite venues have come back to life virtually, and a new City of Toronto series is helping showcase them.

Even once concerts return, they’re likely going to be at smaller capacities. So to make the margins work, a lot of venues are already getting ready for hybrid online/in-person concerts. They help solve a lot of problems with accessibility and open shows up to people in cities that don’t get a lot of touring bands.

Drive-in concerts won’t go away either. Think of last year like season one of COVID concerts. Now that we’ve gotten comfortable with the idea and the kinks have been worked out, they’re only going to get better from here. 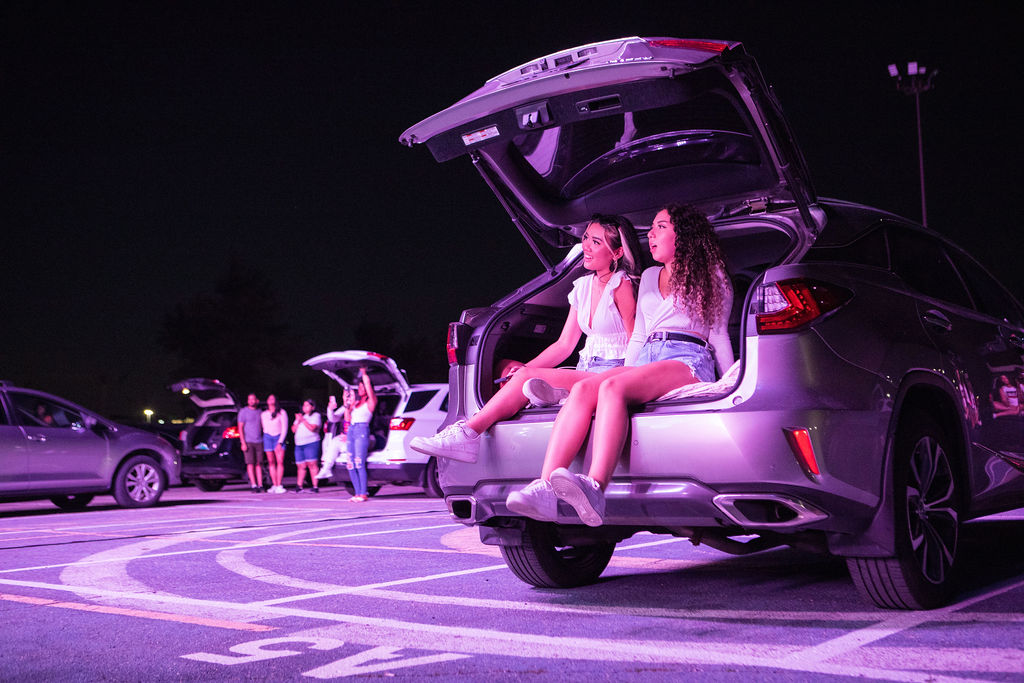 Fans of dvsn attend one of the Toronto R&B group’s drive-in concerts at CityView Drive-In in August.

The venue problem isn’t going away

We’ve had Toronto’s vanishing venues problem on this list for the last few years, so it’s definitely not something new. But the problems have been exacerbated by the pandemic. At least 22 music venues closed last year, and there are many in precarious positions.

There are efforts behind the scenes to secure support, whether that’s tax relief, wholesale liquor pricing or city-underwritten collective venue insurance. Expect to hear a lot more on this front as more venues are forced to pull the plug. When concerts do eventually return, musicians will need a place to play.

Music on every channel

Even if words like “multi-platform” or “omnichannel” make you puke, this is how the music industry is thinking these days. So many new artists are being broken on TikTok, so many musicians and DJs are being pushed into “influencer” territory. Bands are being told to think like brands.

That feels like millennial rise-and-grind hypercapitalism at its actual worst, but it can happen in an organic way too. There’s original music being made on podcasts, whole albums being made on YouTube livestreams. It can be fun to watch your local band playing video games on Twitch. True spontaneity and community can be built online.

On the major-label side, with no star-studded tours to book, they’re going to be milking everything they can out of their back catalogues. There will be a lot more big artist biopics and documentaries, with or without the artists’ families’ consent. And get ready for Taylor Swift to re-record all her old albums.

With musicians losing their entire live music revenue stream, many have had to rely on sales and royalties to get by. That’s brought new scrutiny to the major music streamers that now dominate the music listening market, especially Spotify whose artist payouts are notoriously low – especially for those outside of the 1 per cent.

Last year, the Union of Musicians and Allied Workers formed to demand “Justice At Spotify.” They’re calling on Spotify to deliver increased royalty payments, transparency in their practices and to stop fighting artists. A “tip jar” isn’t enough. They want at least a penny per stream.

Bandcamp Fridays will continue into 2021, letting artists plan around a monthly release schedule in which they can get 100 per cent of sales. But if they’re going to make record sales/streams work as a revenue source again and put pressure on the tech giants exploiting their labour, collectivism might be a way forward. I’ve even heard some rumblings around artists pushing for a special Universal Basic Income in Toronto.

A year to re-examine everything

With no shows to play and no way to safely gather, Toronto’s various music scenes have a chance to rethink their values and the meaning of community. Physical space is vital, especially for marginalized communities – something that we’ve seen with the closing of so many of the city’s queer clubs. But people have been learning to build new communities online.

Last summer saw a series of Black Lives Matter protests take over the continent, which also led to introspection in the music industry. Record labels were forced to confront their own diversity issues, and organizations like ADVANCE and Lil Sis were formed to advocate for Black and BIPOC music workers behind the scenes. That work will continue this year.

We should see more scrutiny on Canadian arts funding. With so many artists relying on it during the pandemic, the structural issues in arts bodies like FACTOR are going to be highlighted even more.

Arts workers will get behind other causes, too. At the end of last year, nearly 400 musicians across Canada signed an Encampment Support Network letter against Toronto encampment evictions.