Seven months after our initial interview, the Toronto singer/songwriter realizes how good she had it recording her latest album Heavy Light 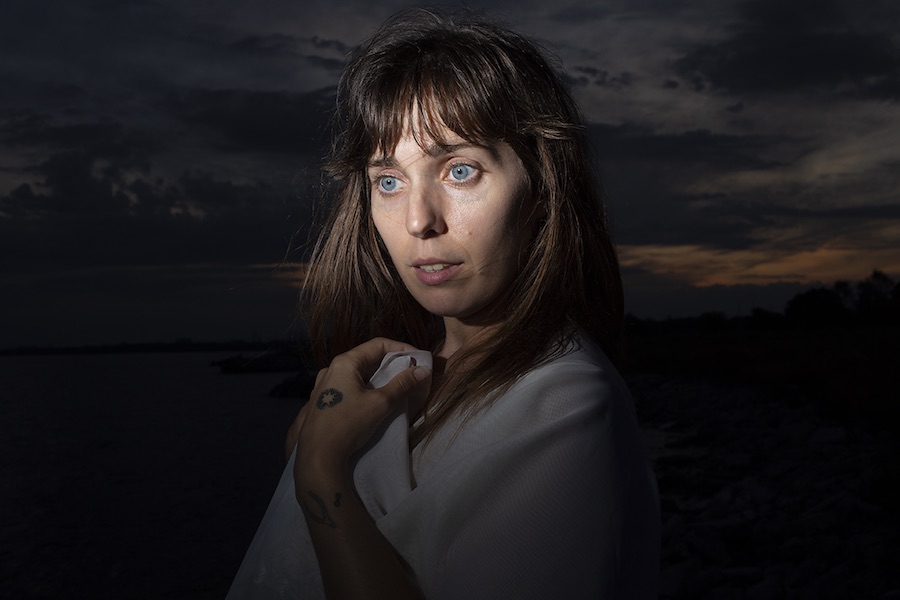 U.S. Girls’ Heavy Light might be the last album of its kind – at least for the foreseeable future.

“There is a snippet of [percussionist] Ed Squires off the cuff at the Heavy Light recording sessions preaching, ‘Take the time to remember this moment because it won’t come around again. It’s not coming again!'” recounts U.S. Girls singer/songwriter Meg Remy in an email to NOW. “How did he know?!”

The album, which came out in early March just weeks before the COVID-19 lockdown, is Remy’s most collectively-made and community-focused album of her career.

Remy gathered some of her friends from the Toronto music scene (who all happen to be amazing singers) at an Airbnb in Montreal. There were seven or eight musicians and collaborators all crammed into a one-bedroom apartment like a music camp. That was still only a fraction of artists who helped put together the album, flittering in and out of the studio up to 17 people at a time. Remy would cook big meals as an incentive for all sorts of collaborators to show up to rehearsals.

She leaned on her artistic community to make the album, her most personal and self-reflective album of her usually character-focused discography, and you can literally see it in the press photos she used: Remy collapsed on the floor, holding the hand of vocal arranger Kritty Uranowski while surrounded by other musicians. You can hear it on the album too, which bursts with the life, vibrancy and connectivity of many people working towards a common goal.

U.S. Girls in the studio before the pandemic.

It hits differently now. The recording process alone would break all sorts of social distancing rules. Other than a few warm-up concerts here and there (including one in mid-February at Paradise Theatre), the songs now live like that, as they did, on record. “Bless them,” says Remy.

“It was a once in a lifetime experience to be gathered and creating together in that way. I don’t think anyone took it for granted,” she writes. “I have revisited my memories from those sessions for nourishment many times throughout these past strange months, as I know I will do as long as I am alive.”

Though Remy never got to tour Heavy Light, the album is still finding resonance. It’s the third straight U.S. Girls album to make Canada’s Polaris Prize shortlist. She’s turned the Polaris gala performance into an unpredictable art, and though it’s virtual this year (on October 19) she still has some interesting plans.

Remy says she has no interest in performing into her laptop, but she’s still up for one-off audio-visual experiments. For the Polaris, she’s collaborated with artists Colin Medley, Norah Sadava and Mike McLaughlin on a 16mm visual accompaniment to the song Woodstock ’99. It’s a song about nostalgia, aging and the burst bubble of young idealism. In the video, she’ll appear as her high school self.

This Friday, October 2, she’ll partake in Venus Fest’s first online festival with another one-off audio-visual project. “I created a 20-minute collage from my ever-growing tape archive (a collection that stretches back to 2005.) Poetry, people screaming, me singing, loops of pop & soul tunes mixed with backwards opera all stitched together,” she teases. “It’s meant to be listened to on headphones like an aural movie.”

“Music will go on”

When we met back in February at Remy’s local west end Toronto cafe, the always philosophical songwriter talked about topics like the untenability and wastefulness of big music festivals, the false narrative of algorithm based music “discovery” and the myth of a music meritocracy.

Listening back to the interview now, some of her critiques have just sharpened since the pandemic.

The U.S. Girls song 4 American Dollars, for instance, comments on the false myth of the American Dream. “You’ve got to have boots if you want to lift those bootstraps,” she sings. The title of the song contains a veiled reference to her own American record label, 4AD, which introduced her to a wider audience long after she’d been releasing U.S. Girls albums on smaller DIY labels.

In the February interview, I mentioned that until recently it’s rare for a song that can be classified as indie rock to explicitly mention class.

“Well they’d be revealing that they invented a new class,” she said. “That’s the thing, in the music industry, it’s just a smaller a version of the capitalist system with the haves and have-nots. Who has infrastructure behind them? Who doesn’t? That dictates the opportunities you get, how many people are going to hear your music, if you’re able to make a living off of it. And it has nothing to do with the merit of the music. It’s completely rigged.”

She mentioned the Polaris Prize, long before Heavy Light found the shortlist, and poked a hole in its completely “merit-based” mandate. Even with its jury of critics, there are too many factors that determine what gets heard, what gets attention and what gets championed, she said. “It’s impossible to assess every record that’s made within the bounds of quote-unquote Canada,” she said.

She mentioned the strength of collaborators from Toronto that are on her album, and how Toronto is totally underrated as a music city. The album features an impossible list of powerhouse singers like Basia Bulat, James Baley, Uranowski, Amanda Krist of Ice Cream, Dorothea Paas, plus many of the players in her husband Max Turnbull’s psychedelic orchestra Badge Epoque Ensemble. And that just scratches the surface.

All of those artists deserve their own spotlight, she said, and she went out of her way to do that on her press tour. The music industry factors that might get one artist more attention than another were there before the pandemic, but it’s hard not to wonder if they’ll just worsen now as live shows are no longer available as a path to new fans or development and artists without a means to survive financially decide it might not be worth the struggle.

So I asked her in our recent email exchange: does COVID-19 exacerbate the discrepancy between the music industry haves and have-nots?

That’s too much to unpack, she admits, especially while she herself is reliant on it. But she does offer a way forward, at least for herself.

“It is helpful for me to constantly remember that MUSIC is different than the MUSIC INDUSTRY,” she writes. “Music is sacred. Music will go on. Go listen to the wind and hear exactly what I mean.”