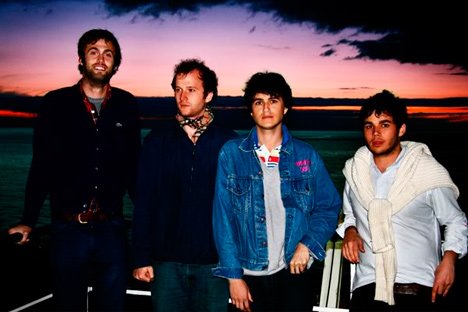 When it was discovered yesterday that reigning indie rock champions Vampire Weekend recorded a version of Rancid’s Ruby Soho for a popular BBC radio show, many music blog pundits called the cover version “improbable” or reaching “new levels of WTF.”

It’s really not so strange when you consider the Brooklynites’ attempt to make their chart-topping new album, Contra, resemble what they consider a “California album.”

In fact, covering Rancid, who hail from Oakland and were an essential player to the SoCal punk explosion of the mid-90s, makes total sense.

Ezra Koenig and company reportedly first jammed out the tune while chilling at the Los Angeles home of Rilo Kiley singer and megababe Jenny Lewis. We could assume this was part of a western pilgrimage the band made last fall with intentions to absorb Cali culture, work out the new tunes at uniquely Cali venues like skate parks while reflecting on Contra’s overall West Coast theme.

Lizzie Widdicombe of the New Yorker followed Vampire for a portion of this spiritual journey and wrote a mostly perfunctory piece detailing the band’s use of world music sounds and the critics who continually deride them for it.

But towards the end the article comes to life, as Widdicombe chronicles a surreal encounter between VW and Blink 182 guitarist/singer Tom DeLonge, who Koenig considers an “iconic California musicians” that the band would like to interview for a documentary about the making of Contra.

One can only hope the footage of this meeting doesn’t hit the editing room floor because, according to Widdicombe, DeLonge, who at the time was also being filmed by his own doc crew, uses the opportunity to make an awkward sales pitch for a fledgling internet project he’s involved in called Modlife. The band leaves the meeting rattled, with Koenig proclaiming ominously that “California has a gravity to it.”

It’s debatable whether Koenig successfully captured that gravity, but Contra’s California dreamin’ does make itself quite evident on the cover of the record, as a sun-bleached blonde valley girl stares blankly back at you. One song called Horchata details a trip down to nearby Mexico and others have the SoCal ska punk vibe that’s connected to Koenig’s professed love for KROQ mainstays like Sublime, which makes a Rancid cover hardly feel like an incongruous moment for VW.

If Vampire Weekend did make a California record it is not in the traditional sense we are accustomed to. It is not a mellow album, it does not steal from Pet Sounds and there is nary a mention of highways, oceans or stars, either planetary or in the celebrity sense. Perhaps part of Contra’s legacy, other than its recent impressive record sales, will be that it attempts, from an outsider’s perspective, to redefine our musty 70s-based idea of what California-themed albums should sound and be like.[rssbreak]