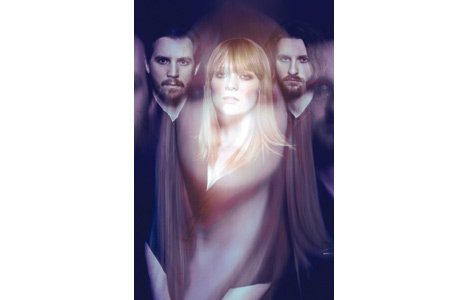 Cam Findlay is not a frequent traveller on the easy road.

Take last year’s meeting at the local office of a major record label, where he discussed the future of his band, Parallels. The concept of a 360 deal was pitched to him, while topics like promotional budgets and royalty rates were also raised. Findlay left the meeting sure about who could best help his band move forward – the Parallels would be going it alone, thank you.

It’s not the first time Findlay, who leads the Toronto electro-pop trio made up of vocalist/lyricist Holly Dodson and live performance member Joey Kehoe, didn’t make the obvious choice. This is the guy who gave notice as drummer for Crystal Castles – just as the band’s first-wave popularity was peaking – in order to transform Parallels from just a project in his mind to an all-consuming reality.

So if Findlay opts to waive managerial help or label interest and, with Dodson’s help, assume total control over Parallels’ affairs, we’re inclined to think he knows what he’s up against. And to some extent, he probably enjoys the challenge.

“We’re involved in the project 100 per cent. And we only want to work with people who are the same way,” says Findlay, sipping java at a Queen West café. “We’re taking control, and if it’s going to be a slower process with us managing, then we’re fine with that. Just as long we as have control over the music and where it goes.”

Dodson isn’t able to meet us, because, in the spirit of DIY, she’s busy doing mail-outs for their upcoming new full-length, Visionaries. The record, a 12-song sonic juggernaut of disco, pop and 70s rock (think Giorgio Moroder producing Fleetwood Mac), consists of 2008’s Ultralight EP and new songs written in the last year. It’s already available for download, and the physical product can be purchased at Friday’s record release show.

“If you’re signed to a label, chances are you wouldn’t be a priority to them, and they can let you fall by the wayside and not end up doing anything for you anyway,” says Dodson from her Toronto home. “At least doing it ourselves, we know we’re doing something. We’re trying to put our music out there, trying to reach as many people as possible and keep the vibe positive.”

Findlay and Dodson’s musical union is a little over a year old, but they’ve known each other for several years. He first approached her with tracks that were just beats, synthesizers and a vocoder. It was probably decent dance floor/club material, but not something a band would perform.

Dodson, daughter of semi-famous Rich, who played in the Stampeders and also owns a vintage gear haven called Marigold Studios that Parallels have at their exclusive disposal, gave the songs an affecting melodic arc that’s one of Visionaries’ most alluring qualities.

“When Parallels started, I didn’t think we would be performing live at all. I thought it would be a studio project and maybe I’d DJ to support it,” explains Findlay. “Then Holly and I started working together and a live aspect came together. With Joey, it turned into a band, but it’s still true to what I initially wanted it to be – a pop project.

“I can see it growing again. I can see it being something totally different. Maybe six people or a symphony orchestra – who knows? But right now, I think it’s getting closer to what I’ve always wanted it to be.”

Parallels vocalist Holly Dodson, who often writes songs with mystical and supernatural themes, discusses some of the places she looks for lyrical inspiration.

Multi-instrumentalist Cam Findlay writes and produces all of Parallels’ music, but says Dodson is fully in charge when it comes to vocals.