Local bands aims at Pitchfork with a silly diss track 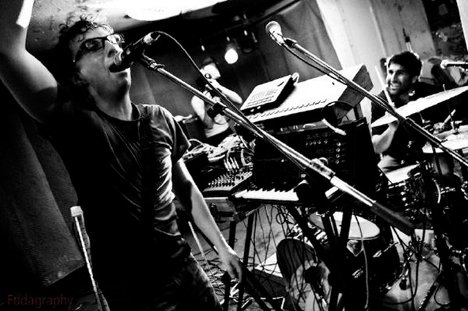 With few exceptions, diss songs have pretty much been the domain of hip-hop. Well, it would seem that the dudes in Toronto electro pop band Woodhands feel like indie rock could use a bit more hate, and have just released a no-holds-barred attack on the music blog heavyweight Pitchfork.

From what we can gather, it’s meant more as a big joke, and Pitchfork are definitely an easy target for this kind of thing. However, the accusations of racism seem a bit heavy handed, especially coming from an act whose audience is just as white as Pitchfork’s readership.

Good way to get some publicity? Maybe, but Woodhands already have a tendency to flirt with novelty territory, and no one other than Weird Al Yankovic wants to be known as a joke act. Anyone else think they may have miscalculated on this one?

In less controversial Woodhands news, we caught a secret show from the duo at the Smiling Buddha January 28, where they unveiled their new live show.

Up until now, they were known for playing everything live and not relying on laptops or pre-programmed tracks – for their new material they’re bringing out a lot more gear, including drum machines and some sequenced synths. This new format is still clearly in the development stage though, as evidenced by some false starts and some timing issues between the humans and the machines. On the bright side, when everything worked smoothly, the artificially augmented band sound much bigger and musically complex.

Check out Woodhands performing Dissembler, featuring Maylee Todd (who’s got a great album coming out soon on Do Right! Music), from their new album Remorsecapade.