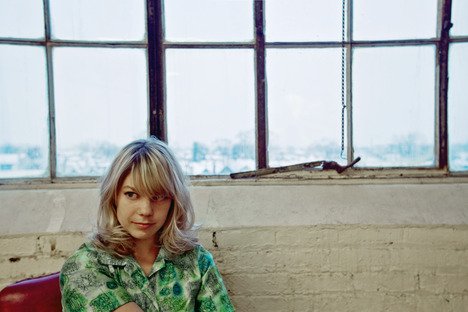 When Basia Bulat’s career started hitting its stride with her 2007 debut, Oh, My Darling, the blond folkie maintained a strong attachment to her London, Ontario, music school crew.

Those friends played on her orch-pop debut and supported her onstage. Bulat seemed reluctant to do anything without them. She admits now to being “terrified” back then at the prospect of being a solo artist.

At the dawn of a new year, with her second album, Heart Of My Own (Secret City), set to hit streets January 26, Bulat sounds more self-assured. But we’ll stop short of saying she’s grown up since her Oh, My Darling days.

“Some of the friends I made the first record with got married and got jobs, but I’m still Peter Pan,” she says from her Toronto home.

Bulat still values those relationships, though. Many of those early ties continue to shape her career. Case in point: for Heart Of My Own she returned to Montreal producer Howard Bilerman, who oversaw her debut.

“He’s become a good friend. For me, there was no question that we would work together on the second album,” says Bulat, whose name reflects her Polish heritage. “I love working with friends, people you’re comfortable with and trust.”

Recorded sporadically during the early months of 2009, the album is very much a product of Bulat’s tour schedule over the last two years. Many of its songs sound like they were written with the stage in mind, with more room for percussion and faster tempos.

“My brother [Bobby Bulat] is the best drummer in the world, so it was natural for me to write something that I thought would give him some space to experiment and try things out.”

One tour stop in particular appears to have affected her writing. Heart’s sleeve shows a collection of photos taken in the Yukon, just outside Dawson City. Bulat, seen frolicking through meadows and hilly expanses, frequently uses images of nature in her lyrics, and her sweet, warbling vocals convey feelings of solitude.

“I don’t know what it is I responded to, but something about that trip resonated with me,” Bulat says. “Up there it was so quiet. So many ideas came to me.”

Basia recalls how she overcame her fears of performing live as a solo artist.