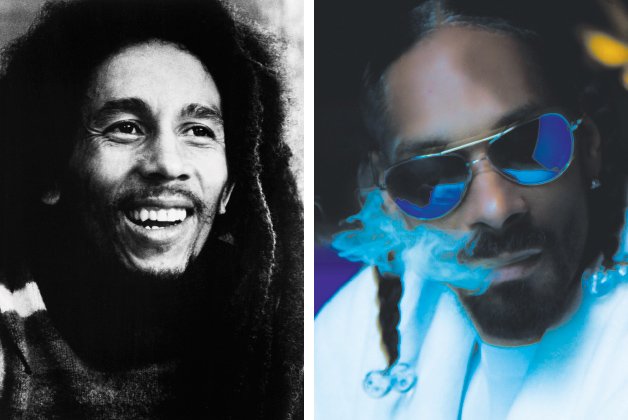 They’ll sing about molly, they’ll rap about lean, but nothing goes better than a musician and his or her green.

There aren’t many shots of reggae’s most iconic artist that don’t include a giant spliff or smoke billowing out of Robert Nesta Marley’s mouth. He named his 1978 album Kaya after his favourite plant, and I Shot The Sheriff is about a plantation owner, right?

The modern artist we most associate with doobies once claimed to inhale 81 per day, seven days a week. And if you watch Reincarnated, the 2012 documentary about his Rastafication, you honestly believe him.

Snoop says Nelson is the only person ever to out-smoke him. Nuff said.

An advocate for legalizing Mary Jane, Rihanna is one of the first weed ambassadors of the social media era – blunt-smoking has been a long-running theme on her Instagram.

Only in the aughts would a Disney star get a Bob Marley cake for her 19th birthday. If that was a cheeky nod to her pot habit, she fully embraced it two years later, just before her 21st, lighting up onstage at the MTV Europe Music Awards.