My night at hard-luck hotel

It's gone from swank to sorry – is the old Waverley worth saving? 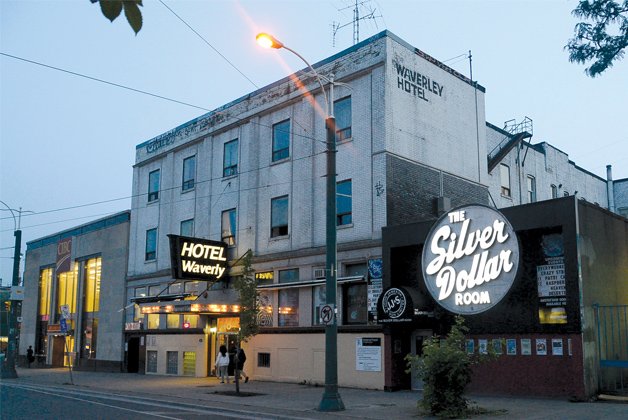 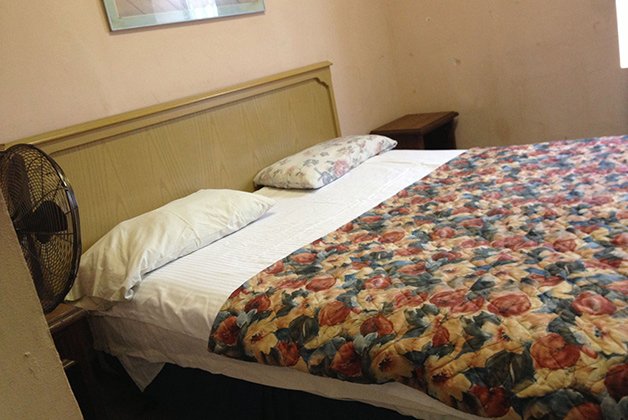 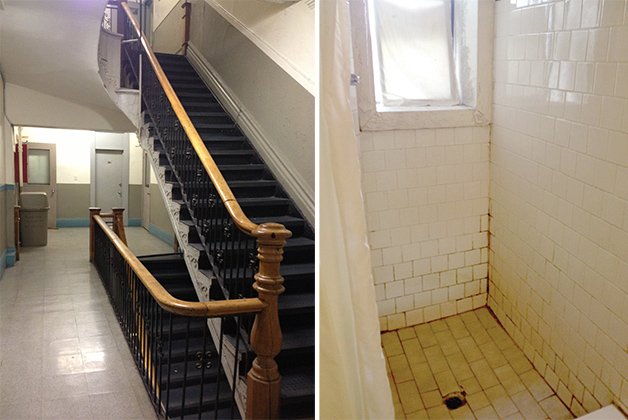 In the lobby of the Waverley Hotel on a summer evening, feeble light from the neon sign out front streams through the cheap lace curtains and falls on an untended snack bar inside. Standing next to rows of chip bags and cans of Stagg Chili, it’s hard to conjure the building’s long-departed elegance.

But photographs hanging next to the front desk offer proof of the hotel’s pre-war glory days, when limousines lined up outside its simple but handsome Edwardian facade and notable guests were mentioned in the society pages.

The original facade is gone now, obscured by a clumsy renovation, and inside only a spacious hallway and a wide staircase hint at the Waverley’s upscale origins.

Soon, even these faint traces of its 113-year history at the corner of Spadina and College could be gone, another loss for this gritty crossroads that has long been a haunt for students, musicians and artists. The Wynn Group, which owns both the Waverley and the Silver Dollar next door, wants to tear down the wood-frame structure and replace it with a 22-storey, 202-unit student residence.

The local residents’ group and city councillor oppose the plans – they warn the proposed development is too tall, and its relatively low rents would turn the place into a gigantic rooming house. Adding to the concern is the Wynn Group’s track record: tenants’ associations heavily criticized the company in the mid-2000s for fetid conditions in its Parkdale apartments.

A community meeting slated for the fall will likely be highly charged, but for now no one appears too bothered about the demolition. That indifference is partly due to the Waverley’s shoddy appearance, but it may also have something to do with what’s gone on inside the hotel over the years.

When J.J. Powell erected the Waverley in 1900, it served Ontario’s wealthier travellers, but from those lofty heights it went into steep decline. By the 1960s it was well on its way to being one of Toronto’s most notorious flophouses, hosting musicians and poets but also transients and criminals. For many, it was a place of misery – the scene of poverty, violence and even murder.

Despite its age, the hotel isn’t on the city’s list of heritage properties the inept upkeep of old buildings over the years often defeats heritage designations. Or maybe its checkered past isn’t the kind of thing memorialized on plaques.

Perhaps bad buildings should just be allowed to die.

When I check in to the hotel on a muggy Saturday night, it seems deserted. A telling sign on the wall outlines rules for staff: “You shall not let room to person or persons whom you have reason to suspect as narcotic dealers, prostitutes, pimps, etc.”

I pay for a room ($80, plus a $20 deposit for the key) and head upstairs. Beyond the old staircase, any sense of past grandeur quickly fades. As I walk nervously down the empty corridor, a smell like rancid vegetables and cigarette butts fills the air. From behind the closed grey doors I hear a TV blaring and, somewhere, a man and woman shouting at each other about who spent the last of the cigarette money.

I turn the key to room 201 and the door opens on a wreck. The walls are smeared with the grime of countless dirty hands, and near the window are elbow-sized dents in the wall that make me envision some kind of struggle. In the bathroom, the shower drips continuously onto the mould-blackened tiles below.

I have the unnerving feeling that the previous occupants haven’t completely gone. They’ve left intimate traces behind: next to the light switch someone has pressed four fat lipstick kisses onto the wall, lined up in a row like words in a cryptic sentence. There are two big unfinished paintings stashed in the closet, one depicting an ominous black bird.

At 3 am, the music from the Comfort Zone, the after-hours club in the Waverley’s basement, begins to pound. But the throbbing electronic beats resounding through the building don’t dispel the feeling of being in a place that is very old, and very unpleasant.

Through the torn window curtains, booming modern Toronto, its nighttime skyline dotted with cranes, is visible. But the Waverley is a place where the city’s legacy of meanness and poverty is still preserved.

After a fitful night (I sleep a few hours on a pair of towels, the cleanest-looking things in the room), I comb through newspaper archives for references to the Waverley. Over the years, its name appears again and again, invariably in connection with crime and hard living.

From the June 14, 1962 edition of the Toronto Star: After a fight in one of the Waverley’s rooms, “Mrs. Bizzell Eleby was charged with wounding… she inflicted a 10-inch scissor gash in the neck of Madelaine Groggan,” a burlesque dancer from Montreal.

June 4, 1986: the Waverley’s nightclub manager was stabbed in the lung and heart after confronting a man “who was pestering the exotic dancers.”

On February 2, 1992, Winston Grosvenor died when police officers streamed into the Waverley to subdue the “drug-crazed” man.

The place holds some more edifying memories, too. According to Stuart Henderson, a Toronto cultural historian, the hotel’s low rates attracted many artists in the 1970s, especially when the Yorkville hippy scene collapsed and bohemians began migrating to Kensington Market around the corner from Spadina and College. Musicians who played the Waverley’s Silver Dollar room, which opened in 1959, were given special rates, Henderson says.

Some artists were probably attracted by Milton Acorn, the so-called “People’s Poet” and the hotel’s most famous long-term resident. He lived there from 1970 to 1977 and was revered by some in Yorkville as a counterculture idol.

“It would be crazy to go so far as to say it’s Toronto’s Chelsea Hotel, but it’s probably the closest thing we have to it,” Henderson says. But although he complains that the city is a place “where we often tear down things long before we should,” he confesses that he’ll have few regrets if the Waverley is flattened.

“This is a building we could stand to lose,” he says.

Some heritage experts believe the Silver Dollar might be a better candidate for preservation. In its 54 years, it’s hosted jazz combos, folksingers and indie rock bands, and its marquee is arguably as iconic as the famous sign above the nearby El Mocambo.

The Wynn Group, which has owned the hotel for 30 years, wants to demolish the club and recreate it on the ground floor of the new development. (The Comfort Zone would be destroyed.) Paul Wynn, a manager at the company, would like to save the Dollar’s vintage sign, but he suspects re-erecting it would run afoul of city bylaws against intrusive signs. (It was grandfathered in when the new rules were passed.)

But Dan Burke, the booker for the Silver Dollar, says if the bar is reopened as part of a new high-rise, it just wouldn’t be the same club.

“They could open up a new club and they could call it the Silver Dollar, but it would certainly lose its stride with the music scene,” he says. “A club’s gotta be alive and active.”

Burke rates the Dollar as “one of the best mid-sized club venues in the entire indie rock world,” and while he thinks it will be several years before the Wynn development gets under way, the writing may be on the wall.

“The meter’s running on the Silver Dollar and the Waverley. They won’t last forever,” he says.

Perhaps the most compelling reason to think twice before demolishing the Waverley has nothing to do with preserving the past or saving a historic music venue. Namely, people live there. For decades it’s been home to low-income tenants who rent rooms on a weekly or monthly basis. (Rates start at $700 a month.) Most stay only a few weeks, but at least one tenant has reportedly been there for 10 years.

With the chronic shortage of affordable housing only getting worse, those who call the Waverley home could soon be left with nowhere to go. They certainly aren’t part of the planned redevelopment, which the Wynn Group stresses will be for students only. Students “want to feel a sense of safety,” Paul Wynn says. “They may not feel that if you start renting to people off the streets.”

Some of the Waverley’s inhabitants frequent the Scott Mission next door for meals, clothing or other assistance. Christina Bonadonna, director of the mission’s men’s program, says staff are starting to reach out to them, especially to a handful of seniors who have lived there for years, in the hope of finding them better housing in the event the hotel is demolished.

Bonadonna believes the Waverley’s demise would be “a mixed blessing” for some of its vulnerable residents. “This is their choice to live there, but in my heart I know they do deserve better,” she says. “And so if we can get them into a better place, that would be great.”

But some are reluctant to contemplate leaving.

“To them it’s still their home, so they’re having some difficulty with that – with letting it go.”