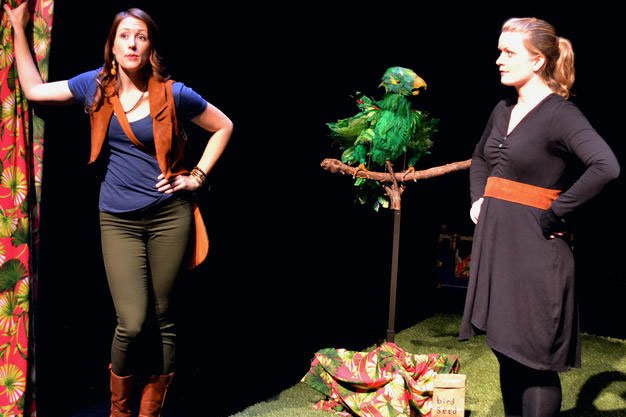 This adaptation of Chicago-based author Sara Levines acclaimed 2011 debut novel brings to life her zany yet insightful story about an underemployed egotistical post-grad (Caitlin Driscoll) who takes up Robert Louis Stevensons swashbuckling adventure classic as a sort of self-help guide.

The unnamed protagonist recounts her attempts to emulate virtues promoted in Stevensons tale of 18th-century pirates boldness, resolution, independence to solve her current quarter-life crisis. A host of characters come into her orbit, including spaced-out boyfriend Lars, best friend Rena, her boss at a pet library (a rental pet shop), family members and her uncooperative parrot, Little Richard (all played by actor/puppeteer Gemma James-Smith).

In Karen Woolridges adaptation, directed by Kate Lynch, James-Smith portrays all the supporting characters through a puppet version of the parrot. Its a weird idea and a daunting task, but the actor makes it work, delivering lots of laughs as she cycles through different voices (funniest is the pet librarys uptight Nordic-accented owner) and enacting Little Richards squawks and avian head and wing movements. The surreal performance gels with Levines wild-ride left-field style, capturing the protagonists precarious mental state.

Its not revealing too much to say that the narrators arbitrary decision to live by Treasure Island doesnt yield the desired results. As the whole plan begins to go sideways, James-Smith, in the best and most serious scene, steps out from behind the parrot puppet to portray the protagonists more emotionally grounded sister.

Like Levines book, the play (at just under an hour) flies by, but it packs a bigger punch than you might expect from a show that prominently features a talking parrot. Levine moves past the now-familiar commentary about the career/economic frustrations of 20- and 30-somethings to explore thornier psychological factors like entitlement, vanity, unrealistic expectations and flippant, ill-conceived life strategies that also contribute to their social stagnation.

Its an interesting take, nicely conveyed by Driscolls characters selfish thoughts and actions.