My year of magical reading 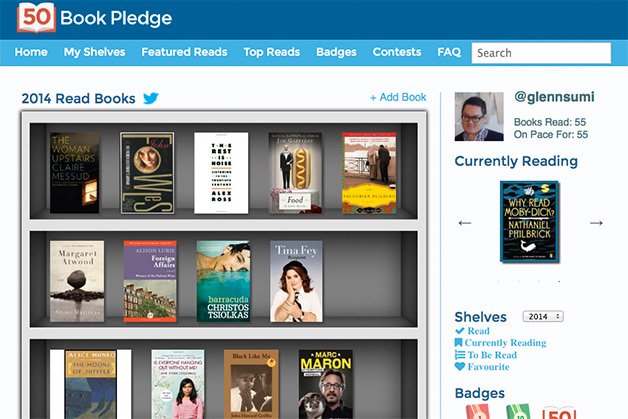 It’s new year’s resolution time, and if you’re currently resolving to read more books, I highly recommend it. In fact, I swear on the stack of the 55 books I read in 2014.

I didn’t start out thinking I’d read that much. I just knew I wanted to read more. I keep a running list on my iPhone of books I want to eventually read. One day I thought: So when am I going to get to them all?

It’s not like I have a lot of leisure time. I’m out almost every night for work. In 2014, I saw 307 stage shows – plays, comedy, opera and dance – and 161 movies. And I spend most of my time writing about them, editing articles about them, talking about them and interviewing people about them.

But nothing is as satisfying as being totally immersed in a book, entering someone’s consciousness and seeing the world – or another world, if it’s speculative fiction – through a different set of eyes. It’s no surprise that a study published in the journal Science found that reading literary fiction encourages empathy.

Before my year of magical reading, I would consume maybe a half-dozen books per year: a couple of prize-winners, novels being turned into films, that sort of thing. I always made sure I reviewed a book or two for NOW’s International Festival of Authors coverage, all to force myself to keep up with current writing.

In 2013 I even joined a book club that meets every few months to discuss a tome over wine and dessert. Reasonable pace, and social too.

Other than that, I’d occasionally pick up a book, read a couple of chapters, put it down and then… well, something would inevitably come along to distract me: an awards show waiting to be live-tweeted, an email or text that needed answering, an acclaimed cable TV series to binge-watch. You know: life.

I did the math. Five or six books a year amounts to a paltry 50 or 60 books a decade. How many decades could I be expected to live, I thought (somewhat morbidly), and therefore how many books would I get to read? The number was puny.

Would I ever get around to Proust’s Remembrance Of Things Past? Tolstoy’s War And Peace? Cervantes’s Don Quixote? Not at this rate.

Ironically, it took social media – which everyone blames for causing distractions – to get me to read more.

Back in February, I noticed the #50BookPledge hashtag popping up in my Twitter feed. It takes you to a site that lets you set goals and monitor your reading over the calendar year. There’s a rating and comment system to record your impressions, a cute little digital bookshelf that displays what you’ve read and badges to show you’ve read certain books and mark your progress. (And hey, I’m not stupid, I know this thing is run by a publisher to push their books.)

50 books seemed ambitious, but my well-read tweeps (people like Janet Somerville, Ing Wong-Ward, Saleema Nawaz and Jaclyn Qua-Hiansen) taking the pledge assured me I could do less. I settled on half: 25.

When you add books to your #50BookPledge shelf, you’re told how many books you can expect to read at your current rate. You can also peek at what others are reading and what they’ve thought of a book. You can create a shelf for volumes you’re currently reading and ones you eventually want to read. It’s all geared to making reading fun and – strange though it seems for an activity that’s so solitary – social. I also joined Goodreads.com, which allows you to follow people and carry on conversations about books, sort of like an online book club.

So, deep in the winter months of 2014, I began reading and just kept at it. I’d read at night (my new iPad Mini meant I could read without having to find a good lamp), between shows and during intermissions, on the subway or streetcar. I also downloaded some audiobooks for commuting (see comedy memoirs below – I find fiction difficult to listen to).

My digital bookshelf filled up. Here are the sorts of books I read:

Recently published acclaimed books: The Curious Incident Of The Dog In The Night-Time The Amazing Adventures Of Kavalier & Clay Revolutionary Road The Goldfinch The Woman Upstairs What We Talk About When We Talk About Anne Frank Tenth Of December

Classics I’d always wanted to read but kept putting off because, hey, I’m not in school anymore: The Age Of Innocence Howards End The Right Stuff Persuasion

Thrillers or suspense novels, which helped me during times of high stress: Trust Your Eyes The Woman In Black The Historian Annihilation Bird Box

Memoirs by comics or funny people (also good as stress-relievers, and better served by audiobooks than reading): Bossypants Is Everyone Hanging Out Without Me? Me Talk Pretty One Day Attempting Normal

Coming-soon-to-a-screen-near you books: Gone Girl The Fault In Our Stars Divergent The Price Of Salt

After reading too many novels, I mixed things up with a work of non-fiction, like Sheri Fink’s Five Days At Memorial, a very detailed look at what happened at a New Orleans hospital after Hurricane Katrina, or The Rest Is Noise, Alex Ross’s encyclopedic study of 20th-century music. I’d never heard of Black Like Me, John Howard Griffin’s intriguing experiment involving race in the 1960s, but it proved to be very timely in 2014.

I followed my instincts. Donna Tartt’s page-turning charmer The Goldfinch was so long and absorbing, I didn’t feel like reading any another novel after it. So I turned to short story collections by Roddy Doyle and Jhumpa Lahiri. Each carefully-etched story provided flashes of insight, without me having to commit to the extended arc of a novel.

Soon I hit the 25-book mark and 50 didn’t seem outrageous. The more I read, the easier it was to read. Books became a habit.

There were times when I was simply too tired or busy to read – during the Film Festival, during the lead up to the holidays. My advice? Ride them through. Go live life. You’ll come back.

On #50BookPledge and Goodreads.com, you’ll discover book lovers of all sorts: people who read more than 200 books a year brilliant people people you have absolutely nothing in common with people you totally know you’d like IRL people who only read a certain genre or author. Don’t compare yourself with anyone else. Go at your own pace.

So here we are at the beginning of a new year. I’ve pledged to read another 50 books. I just finished Herman Melville’s Moby-Dick, which I began in 2014 and was on my “Will I ever get around to reading this classic?” list forever. It’s one of the most rewarding and surprising books I’ve ever read.

Will I finally get around to reading Proust and Cervantes in 2015?

I can’t wait to find out.